A new horrible tragedy in Ituri: How far will the execution of these secret rooms of the State go? 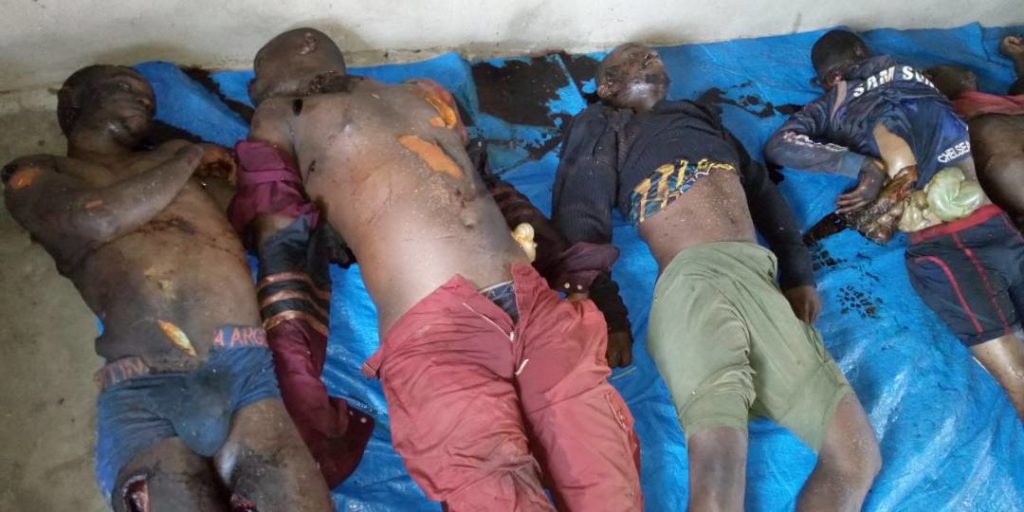 The whole province of Ituri is in consternation. Horrible killings in the form of a war cruelly wrecked many people, leaving several others in serious injury. This event has been observed on the shores of Lake Albert since Saturday, September 15, and reached its peak on Sunday, September 16, 2018. The lake communities that have suffered this misfortune are around Gobu, specifically Muvaramu, Songa 1, Songa 2 and Tara, on the northern littoral axis of Tchomia, in Djugu territory, Ituri province.

Violent attacks have targeted the positions of the government army, the FARDC, of the concerned countries. Immediately it was found intensive use of heavy weapons by both parties in combat, causing enormous human damage whose horror can be noticed through the photos accessible under these links (watch out for sensitive hearts): Image 1, Picture 2, Picture 3.

Revolting is the lie of the Congolese official who makes believe that the FARDC were attacked by Lendu militiamen, when no one in Ituri does not know the identity of these criminals who have just provoked such an unbearable bath of blood according to the Machiavellian plan cleverly woven by the regime of Kinshasa, whose moral authority has vowed to revive at all costs the tragedy in Ituri. The toll provided by the medical corps that assists the victims is frightening: at least 16 dead including 6 loyalist military, at least 20 wounded often serious; the photos attached are more eloquent than any word we could use to describe this horror.

We would like to point out that the murderers of our brothers this last Sunday at the edge of Lake Albert are very well identified. They are composed of two companies of exclusively Rwandan troops who arrived in Bunia aboard two trucks, at the end of the night of Tuesday, September 11, 2018. These Rwandan soldiers dressed in FARDC and officially conveyed and directed on Ituri made a stopover in Bunia (city of Bunia) until late at night, to embark on the field of their operation around 1 am. From then on, the death squads continued to deploy, progressing through nocturnal movements, under the cover of their accomplices installed as scouts throughout Ituri within the FARDC, all along their route. It is these terrorist troops of President Joseph Kabila and his friend Paul Kagame who, equipped more than the Congolese government army in operation in Ituri, attacked the FARDC loyalist positions to claim incursion of local militias (Lendu or Hema) . Images drawn from the events provoked by this comedy of bad taste are unbearable for sensitive hearts, but we are obliged to publish them, even if it is masked for those who will have the courage to appreciate them, in order to make to know the truth of President Kabila’s sadistic behavior against the people he claims to be leading.

The biggest concern of the Kinshasa regime is to train Ituri on the scene of the same kind of tragedy as the one living in the Beni region. The actors, the modus operandi and the background of the justifications for the tragedies by the official authorities remain the same.

However, all the Notables of Ituri remind both national and international opinion that there is nowhere in Ituri interethnic conflicts nor local militias active against the public forces. On the contrary, they are elements from the M23, Rwandan illegal immigrants (Hutu and Tutsi) as well as FDLR who, supported by pseudo-FARDC, are deployed here and there across this province to create hotbeds insecurity and civil wars following the political instructions of President Joseph Kabila. These outlaw troops are among others located in Boga, around Ngongo, Berunda, Tchabi etc. This is an obvious fact whose knowledge does not escape any Ituri national.

It is urgent to call for great vigilance on the part of the people of Ituri, in order to identify and distinguish among the official military deployed in their countries those who are truly loyal to those who come under President Joseph Kabila’s terrorist enterprise. For the latter swears by the resurrection of the inter-communal war within the natives or by any other means of insecurity (massacres, barbarism and terror) that can allow him to implement a chaos that is necessary for him to force his resettlement in the eastern part of the country, or even Bunia, the capital of Ituri province, where he hopes to manage part of the country when he has completed his plan for balkanization.