Alert! Maneuver to postpone the elections in June 2019 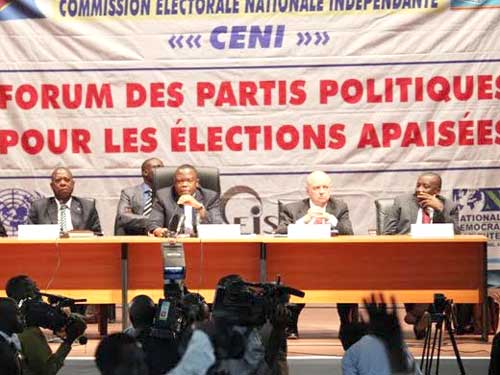 The road to elections in the Democratic Republic of Congo remains trapped. All the circumstances of jubilation, such as Joseph Kabila’s announcement of his withdrawal from the race for a constitutionally prohibited third term, will have given rise to only ephemeral joy.

There is still much to be done in the struggle to win inclusive, free, credible and transparent elections. The political alliance of the majority camp in power continues to hesitate to give free passage to the effective organization of elections as scheduled for December 23, 2018.

Sources very reliable, it is reported the new injunctions of the head of state to the president of the CENI, Matre Corneille Nanga, asking him to continue to play the delay of the polls. This move tends to fix the next elections no earlier than June 23, 2019. This gives rise to an additional six months to allow the predatory power to reposition itself.

Two alibis are prepared to justify this new trick. The first reason will be to mention the constraints of insufficient financial means required as well as the logistical problem. The second reason is to mention the security problem. It is therefore understandable that the government’s refusal to receive foreign financial support for the expected elections is part of a well-balanced strategy as part of this plan to postpone elections. The same goes for the maintenance of the phenomenon of insecurity across the country by an invisible hand of power in place.

The sources consulted in the circle of the Presidency of the Republic specify that the office of the CENI was deputy to initiate a note to Parliament to request the postponement of the elections to 23 June 2019 while proposing a timeline that will be discussed at the National Assembly at the opening of the next parliamentary session, that is to say, opening on September 15, 2018.

If this is the plan that gets in the way, then the Congolese people really have something to worry about. Indeed, Deputies being pocketed by the power, because of macro corruption prevailing there to buy consciences, we see no obstacle that could deviate the conspiracy of the CENI with his manipulator. It is important and urgent that the Congolese people increase their vigilance in the face of this persistent threat, which always distances the hopes of a new era in the country, the key of which remains alternation in power.