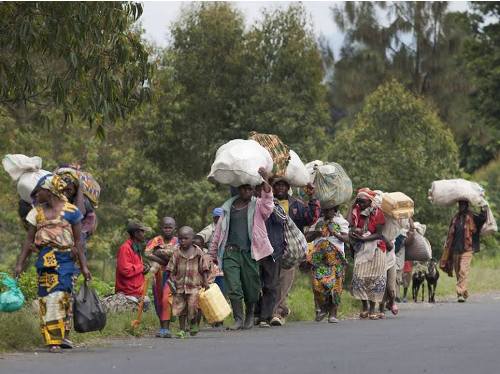 The main vital axes of the territory of Lubero are caught in the grip of the infernal cycle of insecurity. Daily alerts on violence against civilians in Mubana, Kipese, Lubango, Alimbongo, Kitsumbiro and Kasugho, in short throughout the southern territory of Lubero, clash with such an astonishing insensitivity of both military and civilian authorities it would not be worthwhile to continue to dwell on it. Yet the cry of the blood of the innocent rises in the most urgent manner every passing day; and anyone who witnesses the horror of everyday events constantly wonders how long the silence surrounding the ongoing genocide will last.

On September 13, 2017, the deputy governor of North Kivu, Mr. Feller Lutahishirwa, like many other Congolese authorities, unveiled in his own way the determination of the proponents of power to consecrate the genocide of the inhabitants of the Lubero area and of Beni. A slogan was found to cover this Machiavellian plan: « All Nande are Mai-mai » and thus enemies of the State. This allegation has become a well-founded pretext for preventing any succor for the battered Nande people. We move from desolation to desolation when the FARDC, instead of redressing the situation where the armed groups Mazembe, NDC and MNR caused damage, intervene to consume all the traces of hope of life still visible.

There is, therefore, no reason to be discouraged in the attempt to denounce the plot in progress. It is a way of witnessing national as well as international opinions, as everybody expects justice to be done to repair the harm done. The ecclesiastical authority of the Diocese of Butembo-Beni agrees in the same sense by issuing the following warning: 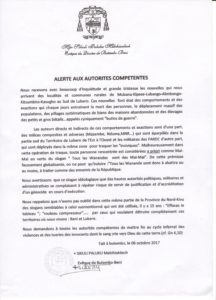