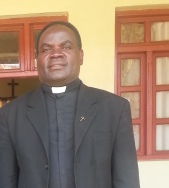 A judicial source in Beni told BLO that a special interrogation was organized for Daniel MASINDA alias Eric, currently detained in Beni with his business companions. This occurred at the level of the same detention cell of MASINDA, in order to preserve the confidentiality of investigation thus carried out on him. The judicial officer says that after this exchange, Daniel MASINDA confessed to having participated in the plan for the assassination of Reverend Father Vincent MACHOZI, the world president of Kyaghanda Yira, shot dead at point-blank range by soldiers on March 20, 2016 in Vitungwe. Masinda accepts that he played a key role in the espionage and spinning that led to the completion of the plan of this assassination.

Parallel to this glimmer of explosion of truth, other revelations confirm the implication of Daniel Masinda. The Masinda collaborators also wanted to tell BLO in their own way an important part of Daniel Masinda’s responsibility in this crime by presenting some two proofs in the following way:

1 / Daniel Masinda received in return for the delivery of the head of Father Machozi a sum of thirty thousand US dollars (30,000 US $). He used part of this money to pay for himself a field, reserving the rest to buy additional space for his plot in Butembo and for its construction (much like Judas Iscariot delivered Jesus for thirty pieces of silver, and that this money was finally recovered to buy land for the burial of foreigners in Jerusalem).

Similarly, many other witnesses claim to hold many other evidence of involvement of Daniel Masinda and companions in the death of Father Machozi. The fear of retaliation by the sponsoring authorities of this mission prevents them from appearing before the public or before the hearings with the evidence in their possession.

BLO contacted Mr. Jacques Mumbere, a companion of Fr. Machozi ‘s struggle, and currently coordinator in charge of international relations of Kyaghanda via the International Steering Committee of this structure, in order to gather his feelings on the opening of a judicial file concerning the assassination of Father Vincent. With this he made believe with conviction that true justice can never be expected from the authorities who continue to rule the country today, given the implication of the power in place in the plan of this assassination which was only one step in the massive plan of massacre of the Yira in Beni-Lubero. He also pointed out that, on the injunction of both provincial and national authorities, all avenues of investigation leading to the truth about the perpetrators of this crime were stifled in Butembo and Beni. Anyone who has demonstrated zeal for this kind of investigation has undergone threats which eventually reduced the friends of the late Father to silence. Hence, the true justice to judge the culprits of the death of Father Vincent and the massacres of Beni can only intervene after the present regime.