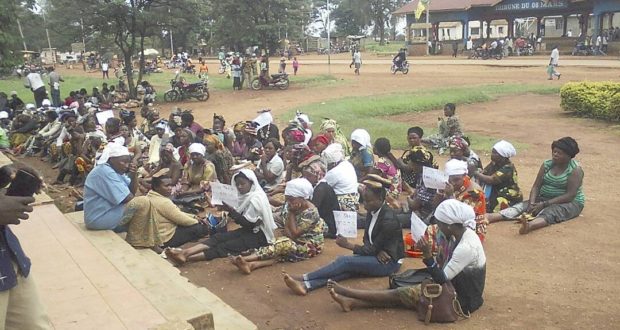 Angry march of the women of Beni

The Democratic Republic of Congo as a whole has 26 provinces, including the province of North Kivu, located in the east of the country, which includes several zones and very diverse tribes, including the Beni-Lubero zone and the Nande tribe.

Indeed, the eastern part of the country has served several times as bases of military operations and has been the victim of atrocities due to the many wars that our country has experienced.
As a result, since 2010 the North Kivu province has witnessed the displacement of unidentified populations armed with knives, the provenance of which has never been revealed to the public, but about which the authorities have been constantly lying. it is the nationals of Masisi and Rutshuru. These populations not recognized by the natives settled in Lubero then in Beni on the pretext of looking for arable land. The natives, being worried for their safety, had seized the government; but since then they have not seen these immigrants nor identified nor returned to their real origin.

In addition, since 2014 to the present day the zone of Beni-Lubero has experienced the resurgence of pseudo Ugandan rebels « ADF » sowing so many desolations in this area, including the massacres of more or less 2500 people, the kidnapping of 1100 people, the disappearance without any continuation of more or less 500 people, hundreds of villages burned and thus impoverishing the population of this zone.
It should be noted that all these massacres occur in this over-militarized zone, controlled by the Congolese armed forces and Monusco. Several raids by parliamentarians and visits by the official authorities, including President Kabila, have not brought any solution. As a result, the population thinks that apparently they go there as tourists because no concrete resolution implemented so far to put an end to these monstrous massacres. On the other hand some assaults are done in the very presence of certain authorities during their short stay in this zone. This is the case of the massacre of Saturday, April 14, 2018, committed under the beard of the patroness of Monusco Ms. Leila Zerrougui who was in Beni, which cost the lives of 9 innocent women.

While the population continues to denounce the complicity of some officers in the situation of insecurity in the area, the month of April is a month the most shaken because several facts have been contradictory to the expectations of the population; firstly, President Kabila’s statement exposing the whole feeling of xenophobia, even genocide, as he puts it against the Nande people. In addition, it is crucial to denounce the rejection, still under the pressure of the same President Kabila, of the motion of no confidence against the national defense minister during the plenary of Monday, April 16, 2018. Thirdly, what about the assault of the Adf on the axis Beni – Kasindi 21 April 2018, operating from 18 hours Friday until 5 am Saturday, without being worried and yet the military base Sokolo 1 and Monusco are located 3 kilometers away from the scene of the tragedy, causing 5 dead several wounded and gone and 2 burnt vehicles? Is not this an indifference betraying a tacit complicity?

Faced with this series of events, when it is too much, on April 26, 2018, the women of Beni of all the beds got up, braving the fear and made a walk of anger on the Nyamwisi boulevard. at the town hall of the city of Beni, to show their indignation at the guilty silence of the authorities, chanting songs, I quote, « we do not want weapons, we want » peace « , God does the miracle does not let not a moment, does the miracle …  »

To eradicate these Adfs would be the ideal that everyone expects of the authorities, how a militia estimated at 3000 men against the armed forces of more or less 15000 soldiers, assisted by the Monusco can operate during four years without being mastered? It is on these questions that we come to conclude that « the Beni Affair is a tree that hides the forest ».