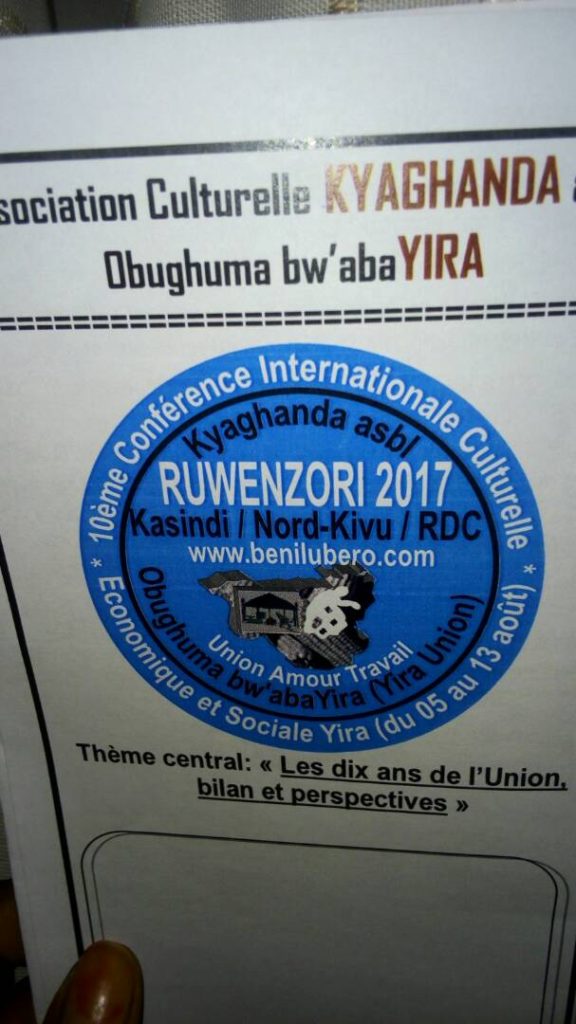 From 05 to 13 August 2017, all the eyes of the Yira will be turned towards the border city of Kasindi-Lubirihya, in Ruwenzori sector, Beni territory, North Kivu Province / DRC. The ten years of the Union will be commemorated under the theme: « Yira Culture for Solidarity, Peace and Development in DR Congo ». It will be a question of taking stock of the ten years of the Union and of projecting new perspectives.

For 9 days, the Yira who will come from all over the world will try to carry out an in-depth analysis on the current stakes of their land through the themes related to culture, economy and social life.

As a reminder, the Kyaghanda is the symbol of the Union, the unavoidable responder for the Yira community. It sits on a conference every year and in Council every three months to reflect on the threats and opportunities facing the community.
The nine previous conferences succeeded each other as follows:

– September 07 to 14, 2008: first edition in Butembo. More than 500 Yira delegates from around the world inaugurated the Kyaghanda Union as a community structure;

– From 18 to 25 August 2009: second edition in Beni city. It was a question not only of devoting the concept « Yira » to the place and place of « Nande », but also of putting in place the texts and organs of the structure, with the « Cultural Council » as first responder of the community.

– From 07 to 15 August 2010: third edition in Lubero, with the participation of the National Minister of Culture (at the time HE Mrs. Kavira Mapera, daughter of the community), the Governor of North Kivu (Julien Paluku Kahongya ) And a strong delegation of the brothers Konzo of Kasese / Uganda. The resolutions put in place a buoyant figure of 16 priority projects for Buyira.

– From 06 to 14 August 2011: fourth edition in Oicha. The conference favored the Community Cause Dedication Pact (PDC) for anyone who gains a favor or a mandate from the community.

– From 11 to 19 August 2012: Fifth edition in Kanyabayonga in a particularly difficult context. The assizes are held on the front line of the war led by the M23. They concentrated mainly on the security aspects, on the file of the parte of the exploitation of the oil.

– From 03 to 11 August 2013: sixth edition at Kyondo. The conference addresses the first amendments to the statutes of the Union to integrate the concerns of each other and the setting up of animators./P>

– August 09 to 17 2014: seventh edition in Butembo. Back to basics! Conference focused on sources of self-financing and the establishment of a Customary Council.

– From 08 to 16 August 2015: eighth edition in Beni. It was in the context of genocide members of the Yira community with the knife. The conference is launching a petition open to the Congolese to demand a neutral international investigation into the massacres.

– From 01 to 07 August 2016: ninth edition in Manguredjipa. The community, orphaned after the murder of Father Vincent Machozi, its president, is organizing new facilitators with IPC coordination in charge of external affairs, lobbying and advocacy, permanent committees on customary issues and local communities .

During these ten years of experimentation, the community has been through the most difficult moments of its existence: the « Genocide » which the Congolese government and the international community do not want to recognize as such. The tightening and tension of the political and social climate of the country are increasingly tightening and once again plunges the community into the uncertainty of tomorrow. The creation of local and foreign armed groups constitutes a permanent threat to the vital union of Yira, which reinforces fear in the heart of the community.

Considering the particularly difficult context, Ruwenzori 2017 will devote itself to the ten-year evaluation of the union and to the electoral processes in the country. It will involve the population in pacification with a view to a successful election before the end of December 2017. That is why all the notables of the community are cordially invited.

It should be emphasized that each year the conference is funded in hundred percent by the sons worthy of its community who are at the terroir and scattered throughout the world. Countries, notables, social leaders and customary leaders all mobilize as one man for its success. The conference does not accept any political, even less religious, connotations, although it welcomes all tendencies and competences.

Thus, the success of this great community mass requires the involvement and contribution of everyone. Already some good wills have begun to manifest themselves. We would like to take this opportunity to offer our sincere thanks. This is the case of the person in charge of the ICCN, site of Mutsora / Mutwanga who contributed his contribution in firewood. A special salongo has been organized in Luvirihya since Monday 17 July and continued until Wednesday 19 July 2017. That is not all, several local notables are those who have begun to give their contributions, others promise cow, goat , Fuel, food, vehicle, housing, etc. You can also add to the number because the need is enormous and everyone’s contribution is very important.

Each Kyaghanda or component freely chooses its delegates and sends them to Kasindi-Lubirihya, with its contribution in kind or in kind, the wish of the opening.

All the activities of the Conference will be relayed by the local press and will be published from day to day on the site www.benilubero.com, obviously as is our custom.

Thank you in advance for your contributions.