Bad time to be a black man in Libya 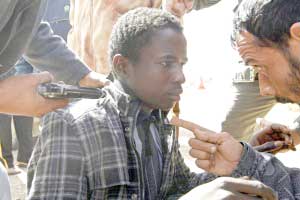 An ITN camera crew follows a terrified group of Nigerian men pleading their innocence in front of anti-Gadhafi forces.

Video: Bad time to be a black man in Libya (CNN)

— while much of the world’s attention is focusing on crude oil prices and the Libyan pipelines in the east of the country– human rights groups say rebels are committing crimes against humanity. [Ndlr: The irony is that the UN allowed NATO to bomb Gaddafi’s army in order to protect civilians in Libya. Are the black not civilians? And if they are, why NATO is not bombing Libyan rebels who are killing innocent blacks?]

In east , African hunt began as towns and cities began fall under the control of Libyan rebels, mobs and gangs. They started to detain, insult, rape and even executing black immigrants, students and refugees.

In the past two weeks, more than 100 Africans from various Sub-Sahara states are believed to have been killed by Libyan rebels and their supporters.

According to Somali refugees in , at least five Somalis from Somaliland and were executed in and by anti-Gaddafi mobs. Dozens of refugees and immigrants workers from , , , , , and have been killed, some of them were led into the desert and stabbed to death. Black Libyan men receiving medical care in hospitals in were reportedly abducted by armed rebels. They are part of more than 200 African immigrants held in secret locations by the rebels.

In many disputes involving Libyan residents and black Africans, the Libyans are turning in the Africans as mercenaries.

Thousands more Africans caught up in this mercenary hysteria are terrified. Some barricaded themselves in their homes, while others hid in the desert. Insulted, threatened, beaten, chased and robbed. Their only crime was being black and therefore treated as “mercenaries” of Gaddafi.

While the airing of Gaddafi’s so called “black mercenaries” by Western media has ignited the issue, some say an xenophobic attitude towards these refugees and labourers has existed for years. They say the current attacks are racially motivated because the rebels have released many actual Libyan mercenaries and soldiers under a tribal agreement. They believe many Arabs felt their Libyan leader was abandoning them for black Africans ever since he became a “pan-Africanist”. Many immigrants were regularly victims of racism.

In many situations, Gaddafi and his inner circle preferred black Africans and Libyans from the south over Libyans from the east. Now the angry mobs using the revolutionary movement across Arabia and are hunting down black people.

Mohamed Abdillahi, , 25, was sleeping at his home in Zouara, when the mobs arrived. “They knocked on the door around 1 o’clock in the morning. They said get out, we’ll kill you, you are blacks, foreigners, clear.”

The testimonials and are very similar among the thousands of Africans that saw the ugly side of in the past weeks. “They have attacked us, they took everything from us,” said Ali Farah, Somali labourer 29 years.

“They wanted to kill civilians, they beat many of us. To me, they are animals,” says Jamal Hussein, 25 years Sudanese worker.

Many of the fleeing Africans are terrified to tell their stories. At the checkpoint, they do not mingle with others. When asked about their ordeal, they just freeze, “they stopped us many times and said not tell what has happened here, say there are no problems,” Elias Nour from said.

“For the past seven days, my whole family has been holed up at home without any food, running water or electricity, we appeal for urgent intervention,” Mohamed Abdi from told local reporters by cellphone.

In the latest reports reaching Somalilandpress from , forces loyal to Col. Muammar Gaddafi have reportedly began kidnapping African and Libyan youths from their homes and universities. They are said to be preparing them for a showdown against the rebels. The kidnapped youths include five teenagers from .

Many Africans have virtually nothing after years in , many have been looted, robbed, while others saw their living quarters and apartments go in flames. Now they are praying to God to send them home.

While the international leaders are busy drafting resolutions to dismantle Muammar Gaddafi, the African Union has not yet commented on the situation in .

Meanwhile, the International Criminal Court is said to have started a formal inquiry into possible crimes against humanity in that will investigate the Libyan regime.