Beni Genocide Joseph Kabila orders BISENGIMANA to infiltrate those who commit genocide in the national police in the Great-North.

Joseph Kabila releases his last cards game in Goma: Scene III
In our edition September 03 (https://benilubero.com/nation-in-danger-joseph-kabila-reveal-his-latest-cards-game-in-goma/), we denounced the Machiavellian plan that Kabila is trying to activate or emit in Great-North and in Ituri. This project, we wrote, is to militarize this part of the Republic in order to make it his Kingdom where he will have the power to give life and death.
The complicity of FARDC and in a sense that of Joseph Kabila, the Supreme Commander of the FARDC, is no longer a secret to anyone. Several reports have shown it. Increasingly, the pressure is felt both  domestically  and internationally and demand that Joseph Kabila put an end to this genocide. Many called for the strengthening of military and police officers and improve their equipment to deal with the alleged Adf. 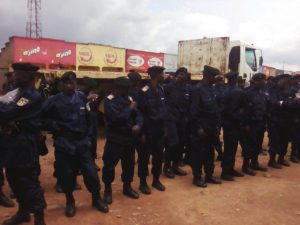 Good strategy, Kabila took the ball at the right time to carry his plan to fruition, including by the militarization of cities in the Great-North and Ituri! And it is already a reality as of September 6. She is past the police this time. And it is the Commissioner General of the National Police, Mr Bisengimana who had announced it on September 1, without the press paying attention: "In Goma, we're going to take the elements we are sending here, in Butembo, Oicha and Eringeti. Also, there is a sampling of Kinshasa and to pre-position a response unit that can intervene in case there is a problem in this or that corner of the province " (http://www.radiookapi.net/ 2016/09/02/actualite/securite/ la-police-nationale-veut- renforcer-ses-effectifs-beni )
Just browse through the towns of Butembo, Beni, and Oicha Eringeti to be aware of it. Police numbers have been increased and renewed equipment and increased. In the audio below, you can hear BISENGIMANA himself assert. One is tempted to congratulate the regime for the speed with which it materialized his promise. But as with the case of the curfew refused by the population (https://benilubero.com/stop-provoking-the-people/), astute observers asked themselves several questions, including:
– Did it have to take more than 1,500 dead, killed, slaughtered, sometimes thrown into rivers, to move the heart of the regime and look troubled, and gracious, before the population long curved?
– Why did you wait so long to reinforce and equip the police and the army?
– Why try to militarize the cities and not the forest where the enemy emerges to slay the population?
These are all questions, especially that of the origin of these police officers, that pushed Benilubero Online to be interested in the militarization of the Great North cities.
Where do these thousands of police officers come from that flood all the cities of the Great-North?
We just said, the rapid implementation of the deployment of police officers in the Great North has surprised us. Online Benilubero then conducted its investigations to know where, how, and when these police arrived!
The surprise was great to see that no military convoy or police officers arrived in by way of Goma-Beni road between September 1 and September 6. The same investigations reported no movement that would come from the Eastern Province near Eringenti.
Benilubero Online had the courage to contact MONUSCO to inquire whether it was asked by the government to deploy thousands of police officers from Goma to Beni and from Ituri to Beni. Their answer is clear: no! . Benilubero also contacted the services of RVA who said they know nothing.
So where are these thousands of policemen coming from if they did not arrive either by road or by air?
Finally, the veil is lifted! Our sources inform that some of these police officers are Rwandan refugees in neighboring countries (read about it, the article that had precipitated the assassination of Father Machozi: https://benilubero.com/deux- rwandais-armes-avec- passeports-tanzaniens-arretes- a-isale-bulambo/. They arrive at night by road during the curfew. others are Rwandan, former members of the M23. others are of the FDLR who had been displaced from Kanyabayonga (which is a few kilometers from the Rwandan border) near the eastern province, supposedly to be repatriated to Rwanda, while the Eastern province is more than 800kms from the Rwandan border! Most of those who have been deployed in Eastern province have received a clandestine military training in Boga Tchabi they have just completed on 28/08/2016. They were taught the Nande  language and Swahili for rapid infiltration into the medium.
For more details on this place training that is Boga Tshabi, go to the following links:
1. https://benilubero.com/ ituri-pourquoi-les-hutu- apprenant-le-kinande- inquietent-ils-les-nande/
2. https://benilubero.com/ occupation-rwandaise-du-kivu- ituri-ca-passe-ou-ca-casse-en- 2016/
3. https://benilubero.com/ mensonge-dangereux-dun- article-de-radio-okapi-du-2- septembre-2015/
4. https://benilubero.com/rdc- le-glissement-et-le-dialogue- au-service-de-la- balkanisation-du-kivu-ituri/
5. https://benilubero.com/kivu- ituri-une-occupation- militaire-armee-se-profile-a- l%e2%80%99horizon/
According to our sources, since 30/08/2016, thousands of people are arriving in the Great North, including in Beni and Mbau by the Kamango and Nyaleke road. An eyewitness, who shall remain nameless for security reasons, attracted by a strange noise, picked through a hole in his window and counted over 300 people in single file, all with military uniforms and small packages on their heads!
According to these sources (social networks spoke of it too), the home base of newcomers would be new concessions recently purchased by Joseph Kabila in the Great North: the former farm of Mr Engels located between Mutwanga and Lume, his house in downtown Beni known as CAPACO, his farm of Kabasha on the road to Beni-Butembo and concession of Musyenene. That's where they are transformed into Congolese before being redeployed into the cities. 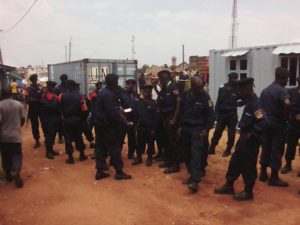 These are the military and the policemen referred to in the announcement made by the Chief of Staff of the Fardc and the General Commissioner of the National Police!
Bisengimana has described their character and determination to kill during the parade that Bisengimana had with the Beni officers after announcing the arrival of the police: "I ask you to receive other policemen that will arrive and to accept them. They do not have a child's heart. They have two arms: one to intimidate and another to kill immediately. They trigger happy. And if you want you can tell the notables of the city they will do nothing to these officers. "
They are the murderers! To conceal them, they received the outfits of the Congolese national police, Congolese names, and the Congolese identity cards that falsify their origins.
The population has always denounced it both to the police, the Congolese army and MONUSCO!
The murderers do not belong to any Congolese ethnic group. They are foreigners, sneaked into the Congolese army. Many times the population and survivors in their testimonies claim that they are made up of children, women, youth and adults. From now on it is from the police and the city that they will continue their genocide at the appropriate time.
This is to assess the progress of this plan that the ministers of Defence and of the Interior were sent to Beni where they currently stay. You understand why the curfew was not lifted, because everything is not yet set and continues the redeployment. Poor mayors attending powerlessly orin  complicity to genocide of their people!
There is no doubt: the international opinion will applaud this redeployment of police in the city. Through MONUSCO, it will announce its collaboration with the police. But it will never know that it is working with the slaughterer  of the population himself! Joseph Kabila has released a beautiful cards game!
Cities of the Great North, next battlefields!
First, the regime will multiply its military operations in the forest and announce FARDC victories over the enemy. This is normal, because as in the past, the enemy will be moved to the cities and the army arrives in a deserted forest. The strategy is brilliant! And elsewhere during the joint press conference by Mother Sidikou and the Nuncio, the head of military operations of MONUSCO announced to the press that they will soon bring journalists in areas conquered by the army in collaboration with the Monusoco.
The enemy thus comes to change strategy! The combat zone is going to be in the city.
Everyone predict turbulence in the upcoming days. Population will take to the streets to demand the elections, the departure of Joseph Kabila. To the east of the DRC where Kabila account refuge when driven out of Kinshasa, the people will take to the streets and organize dead cities to demand immediate return to their villages and fields from which they were driven nearly two years. To cope with these challenges and strengthen his power in his Kingdom, Kabila will call the police and not the military that will be operating in secret by Fall Sikabwe. And as said Bisengimana, the police does not have a child's heart but she triggers happy. No notable, no town mayor will do anything against it.
Online Benilubero therefore calls:
– To the Congolese people to realize that the nation is in danger. To MONUSCO to be vigilant and to dismantle the trap that the regime wants to attract it into, as it has managed to do in the past.
– To the African Union, the European Union and the US, to reconsider their support for the regime in place, support that it is qualified as an accomplice to this day by the Congolese population. Stop the flow of blood which has flowed too much! These world leaders have to understand that they must act as quickly as possible.
– To the international media, including RFI, BBC, ELJAZIRA, CNN, send permanent correspondents in the East of the DRC to witness what will happen in the days and weeks to come to the East of the DRC .
Yes, Machozi had said on the eve of his assassination:
"It is thus understood the grave danger of any extension to the power of Joseph Kabila. Congolese worthy of the name must reject any form of transition. Indeed, given what is happening in Kivu- Ituri, any transition beyond December 2016 would allow time and resources to the Congolese government which is, obviously, an accomplice of the Rwandan occupation of Kivu- Ituri being " (Father Vincent Machozi, March 19, 2016, speech that earned his murder the next day).
©Beni-Lubero Online.