BENI GENOCIDE: THE VISION OF THE VATICAN THROUGH WORDS AND ACTIONS OF APOSTOLIC NUNCIO 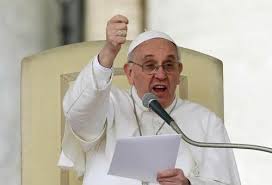 The Apostolic Nuncio, Monsignor LUIS MARYANO MONTEMAYOR, just finished his 48-hour stay in Beni territory. As he said during the Mass celebrated Tuesday, August 30 at the esplanade of the parish of St. Therese of Beni city before a huge crowd, his trip was to bring the compassion of the Holy Father to sons and daughters of Beni, during those dark times in their history Benilubero would like to return to the strong words and moments of the visit of the Apostolic nuncio who, we seem, may mark a turning point in this genocide.
A gesture: Rwangoma or the of Wall lamentation!
Monday, August 29, 2016!
It is 1:20 p.m. The Apostolic Nuncio, accompanied by the Special Representative of the UN Secretary DRC, Mr Maman Sidikou, crowd the grounds of Beni. He is welcomed by the local bishop, Mgr Sikuli Melchizedek.
Without delay, the convoy headed to Rwangoma where there has been the latest massacre of over 100 people not including children who according to rumors were thrown into the river Semuliki. The Nuncio discovers the horror of these massacres. A ghost town. The area is guarded by soldiers of the FARDC (perhaps it is now their mission: to be guardians of cemeteries and abandoned territories)! Here are burned houses! Some victims were certainly charred inside. There are abandoned houses. The nuncio with a hardened face advances and stops in front of a padlocked house! As to the groaning Wall in Jerusalem where Jews gather every day to remember not only the destruction of the temple but also the deportation of their daughters and sons in exile, a silent nuncio touches  in length the wall of one of abandoned houses !
The image speaks for itself!

And it's no wonder it toured the social networks! Before him, the Congolese authorities paraded there! But nobody took the time to gather in deep silence before the charred walls! As if afraid of this inner silence a voice calls them and the calls them to a radical change! The nuncio is in disbelief ! From this silence, a voice has certainly blown him words which take the truth like a refrain of survivors but still stifled: It is not known exactly who did the massacres. It's easy to talk of the ADF. There are several players here. We're not sure exactly what they want. Figure it! Tuesday, April 30
The pastor knows his sheep and his sheep hear his voice
It is 9:00 am. The esplanade of the parish St. Teresa of Avila is full of a huge crowd. The procession can begin, to the rhythm of the hymn of mercy. Before beginning the Mass, Bishop Sikuli Melchizedek, addresses the welcome address to the host and hope that his visit is the beginning of the breaking of multiform insecurity in the diocese. At the altar, it is easily recognized by its left Sikuli Bishop and the Provincial Father of the Assumptionists including three brothers, Anselm, Edmond and Jean-Pierre, were abducted October 19, 2012 and who remain without news and another, father Vincent Machozi, then president of Kyghanda Yira association and founder of the site www.benilubero.com, was assassinated March 20, 2016.
In his word of introduction, the apostolic nuncio moves the crowd when he tells them he is sent by his Holiness, Pope Francis, to express to the Congolese population in general and the people of Beni and in particular its proximity and compassion! Throughout the Mass, especially during the homily, he noted a deep complicity between the nuncio and the crowd, as between a shepherd who knows his sheep and his sheep know his voice. We were far from the images of the crowd who wanted to do battle with the First Prime Minister Matata Mponyo, the Minister of Interior Boshab and the mayor of the city, or uprising against the authorities as well as in Beni Butembo, in the aftermath of the massacres of Rwangoma! During the homily, the Nuncio calls the faithful to be prophets but to the image of Jesus Christ whose life consisted "to demonstrate the love of God simply by not responding to violence with violence but by good . Spread the love of Jesus to all, unconditionally, is the way in which we too are called to be prophets… ". 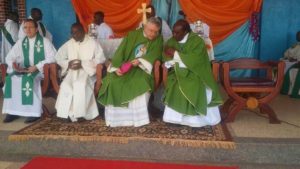 North Kivu or today's Armenia!
To listen to him, it is likely to think  that the emissary of Pope ignores the suffering experienced by the people. Well no ! Before finishing his homily, he does not hesitate to define the massacres of Beni as genocide:
A few months ago, Pope Francis went to visit Armenia to commemorate the centenary of Metz Yeghéra, the "Grand Mal" a tragedy, a genocide, which hit the Armenian people, and caused the death of a considerable multitude of people. On this occasion, in his speech to the civil authorities and the diplomatic corps, the Holy Father pronounced memorable words I found valid for the situation we face here in North Kivu …
Yes, we are facing a genocide. All killings are happening in an area inhabited predominantly by a single ethnic group and if the procedure is not reminiscent of the Rwandan genocide: Children, women, old people, young adults are killed, slaughtered, gutted for belonging to Nande ethnic group. Territories of Beni-Lubero is becoming Armenia from the beginning of this century with the knowledge and in view of the government and the international community represented by MONUSCO whose mission is ultimately to observe and count the dead.
A press conference that sounds like an indictment against the regime in place
After his visit, the Apostolic Nuncio held a press conference together with the Special Representative of the Unions Nations in Congo!

Here are some of these statements and beliefs about what is happening today in the Grand-North. Compared to the thesis of the government that wants to believe that terrorists have pitched their tent in Beni territory, the nuncio affirms there is no international terrorism in Beni.  Under the same angle of ideas, one can not speak of the massacres of Christians. But, the nuncio added, if one is not careful, terrorism will happen and what happened in Central African Republic, namely the economic rivalry between two nations later transformed into religious war, is a risk which is not to be excluded.
Instead, the terrorism is inside the country and it is up to the Congolese government to assume its responsibilities. Regarding the massacres of Rwangoma, the envoy of the pope is explicit: One should not tell the Congolese government what to do. But you put pressure. We put the Congolese authorities to their responsibilities. This is why the Pope has spoken. He spoke to the international community. But indirectly it is a call to the Congolese government. What happened in Rwangoma was a direct challenge to the president. One can not hide that. He had promised "I bring you peace." And four days later there were 104 deaths. It's no luck … This is clearly a direct challenge to the president. The reading of the international community is clear. You can claim that you are the leader but over there people are killed. That's the reality.
And to add: The Catholic Church has more than 33 million faithful that the Holy Father is a spiritual Father to. Politicians must take note. These massacres depend on their political future. The elections will depend on the answer to be given to these massacres! But in saying this, the nuncio would stress that relations between the Vatican and the government are good: We are not hostile to the government and the government knows that we are not hostile. But we have the right to speak the truth … Either we fix a number of problems or the Congo is screwed. As it is now.
The record of the DR Congo in the Pope's program menu on September 11, 2016
Through its services and emissaries to the United Nations, Pope educates the world about this tragedy. For efficiency in his diplomacy, the pope needed an objective report drawn not from offices away from the scene of the tragedy, but on the ground. This is why the pope sent the apostolic nuncio to gather elements of this report. Mission accomplished.
The nuncio is expected at the Vatican by the Pope, he reveals, September 11, 2016! That day, the Pope will hear through the mouth of his representative in Congo cries of peoples of Beni and Lubero and he will read the tragic story of genocide, as it was repeated by the various reports sent to him! As can be seen through the actions and words of the Apostolic Nuncio, the Vatican Vision of the genocide is clear. It reflects the cry of the people of Beni and Lubero. We see how the pope as a good shepherd knows his sheep!
Kahambu Bernadette Kivava
Beni
©Beni-Lubero Online.