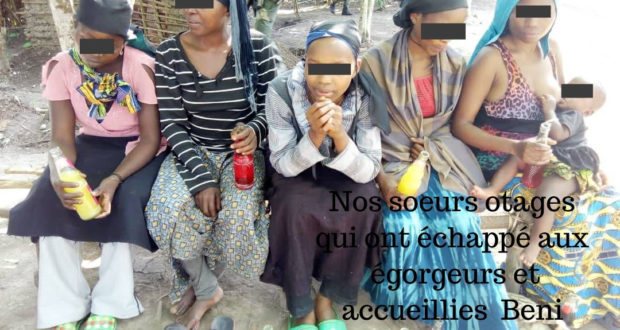 Five girls and women and a baby long held hostage by the alleged ADF have providentially escaped from the hands of their captors Friday, July 20, 2018. The circumstance of their escape was favored by the program of prayer that these attackers, bearing the identity of Muslims, usually hold every Friday. For this purpose, obligatory participation in the “Ijuma” cult is usually planned around midday, as well as fasting from 12 noon to 3 pm. Often, during this time, security and surveillance devices are mitigated.

Among the testimonies collected from these survivors it is necessary to underline the following:

– The alleged ADF retain under their power a multitude of people acquired by the kidnapping. The hostages are used to transport the loot during the various incursions carried out by these incivists against the civilians of the region either in their localities of residence, or in the fields.
– The said ADFs are constantly mobile, still moving between three camps which they maintain within a 25-kilometer radius alongside the road leading to Kamango, their main field of action being the area between the road axis of Kamango and Kasindi’s.
– In the maquis of alleged ADF, there would be a diversity of people; however:
* the majority of them speak Kinyarwanda language. The latter are composed of children, women and adults.
* In second place, numerically, come people speaking Lingala and Swahili.
* In third place, there are those speaking Kinande, they are people who, having been kidnapped in the fields or during the incursions, were enlisted of forces in the rank of the slaughtering fighters.
– A vehicle makes shuttles between the camps of said ADF and the city of Beni to ensure their supply of food, leggings, medicine and other materials they need in the maquis.
– From their maquis, according to their telecommunications, these rebels are still connected with people who give them orders and direct their operations from the military hierarchy in Beni, or on the fields of operations Sokola, and sometimes from Kinshasa.
– The camps of the alleged ADF are still in rays that do not deviate far from the positions of the FARDC, some elements of which go so far as to rub these uncivic, so that the government troops could eradicate these incivists for a long time, if they really had the will.

On the basis of these testimonies, numerous questions and suspicions arise, including:
– How “Lingalaphones and Swahiliphones” could be found in a maquis of rebels supposed to be Ugandan? Who infiltrated them? How is it that they share the same areas with FARDC without being worried by them? How could FARDC elements known as loyalists peacefully cottle rebels they are supposed to stalk?
– With regard to Rwandophones in this maquis, how did they get there? Who installed them there? where would they go to find themselves so massively without the official caring?

Also, accusations targeting the FARDC and the authorities of the country to be in complicity with false ADF manufactured for the political needs of the regime in place are still relevant.

Again, should denounce the lie of the FARDC who, through the statements of the spokesman of Operation Sokola, claim to have released the present ex-hostages at the end of hard fighting against the alleged ADF. Because the truth is that the five girls liberated themselves by escape and then presented themselves to the FARDC of one of the close positions of their detention.

The Democratic Republic of Congo can develop and go to elections without the Kivu – Genocide of the Nande People.