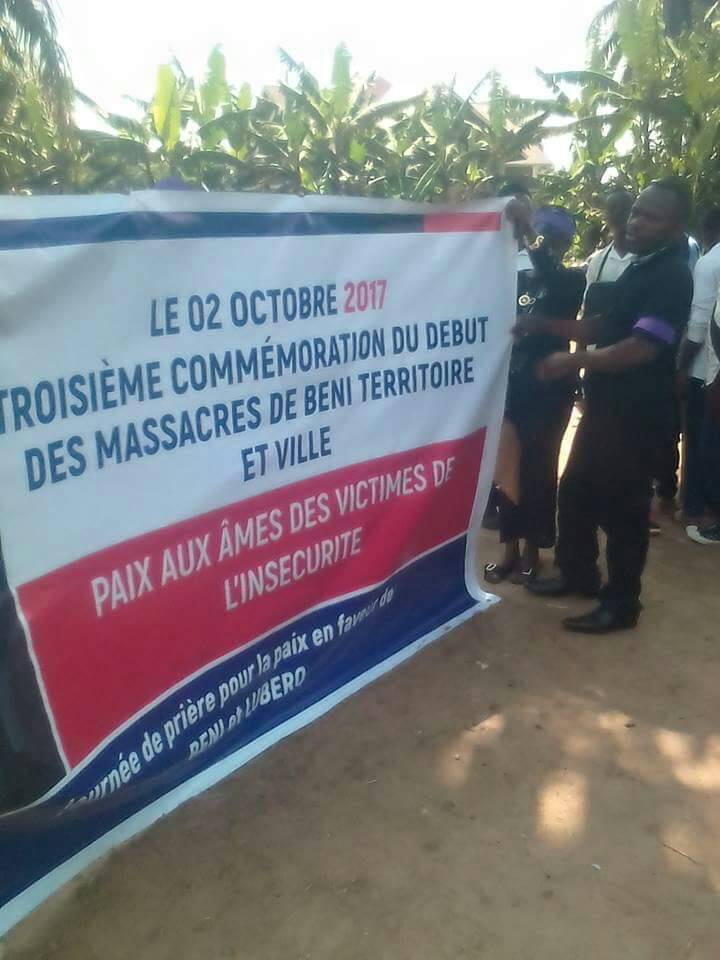 From 02 October 2014 to 02 October 2017, it has been exactly three years, day to day, since the massacres in the territory of Beni were triggered with the appearance of a real genocide against the Yira-Nande people. It is astounding to see that this barbarism, far from being stopped by those who have jurisdiction, has constantly worsened, taking with it the most illustrious people of the Yira community. Such was the fate reserved for the world president of Kyaghanda-Yira, savagely murdered on March 20, 2016.

As the days pass, events have finally revealed to the public, both national and international, the conspiratorial character of these massacres. The Yira-Nande people are victims of a conspiracy of extermination which apparently does not deliver its « raison d’être » or reveal the true name of its author.

But the secret of the punch of words on this subject can no longer continue to be masked with the knowledge and in view of multiple clues which, based on chronicle of the facts, now fixes the spirits. On this, it was discovered, inter alia, the following:

1. The perpetrators of the Beni massacres are not traditional Ugandan ADF rebels.

After the exploits of Operation Sokola 1 under the command of the illustrious General Bauma, the classical ADFs were annihilated and were never able to rebuild themselves to have a force capable of defying a national army formed by the FARDC.

The captured cutthroats revealed their diverse origins (Rwandan, Congolese and Ugandan), while underpinning the conspiratorial nature of their activities, which resembled a policy of eviction against the indigenous peoples.
There has been ample evidence of the connection or participation of the ex-rebels of the M23, a negative force acting under Rwandan influence, in the genocidal operation.

There was a clear connection between the Hutu murderers and the Hutu immigrants flocking to the south of Ituri and to the north of Beni territory. The bases of settlement of these immigrants serve as a reservoir for those killers who sometimes operate from the said bases or retreat to them after certain operations as has been observed many times in Eringeti and its surroundings.

2. The Complicity of the Power in Place

Who has not heard of the complicity of the FARDC with the murderers of Beni? Many observers, unfortunately, continue to regard this reality as a fable. The chain of this complicity on the ground includes General Akili Mundos and extends its ramifications in the various units in operation. The army’s lack of assistance to the massacred peasants and especially the repression of the army against the witnesses who reported to the latter the identity of the slaughterers were the biggest scandals committed by the FARDC of the sokola 1 operation in Beni.

Several defendants braved fear to openly cite before the court the involvement of both civilian and military authorities in collaboration with the murderers. Mr. Nyonyi, the mayor of the city of Beni, and General Akiki Mundos are among those criminal authorities.

One of the biggest scandals of the complicity of the power in place in the genocide against the Yira revealed itself at the moment when the bruised people entrusted themselves to the justice. Until today, instead of arresting the real criminals and perpetrators of the killings, the country’s authorities are working to incriminate innocent people, to cover terrorists and to blame the culprits and their accomplices.

Scenarios have been set up to encourage the escape of the perpetrators and accomplices of the killings which have had a bad chance of being apprehended. The case of Daniel Masinda is emblematic more on this.

Power in place has done everything to stifle the trial of the murder of Father Vincent Machozi, the world president of Kyaghanda-Yira. This is still happening today with the abduction of the Catholic priests of the parish of Bunyuka. Several days after the arrest of the accomplices (presented as the motor brain) of their abduction, the victims are not always released. And no pressure on the perpetrators seems to be led by the courts.

There are many other facts of the same kind proving a conspiracy formally orchestrated against the Yira-Nande.

The third anniversary of the outbreak of the Beni massacres is an opportunity for the Yira people to remind the world of its suffering and to demand justice in memory of the victims.