Beni: Oicha under the simmering of the mass after the assassination of a young man by FARDC

Enough is enough! The population of the city of Oicha, capital of Beni territory exploses in anger in protest against yet another open and especially free killing of a civilian by the regular army, that is to say the FARDC. On the night of 20 to 21/11/2017, an innocent young man, 25-year-old Kambale Kabuyaya Paulin, was killed by three elements carrying fire arms and wearing FARDC uniforms around 8 pm.

The population could not stand such an ignoble crime. A popular demonstration spontaneously surfaced. The population demands the departure of new FARDC units recently deployed in this area. These troops of the Congolese official army are confounded in everything to the terrorists represented by the name of the ADF. These events could only grow, especially at a time when the public has irrefutable evidence of FARDC complicity alongside killers of civilians in the region, as the hearings of the ADF trial in Beni expose it todays.

The soldiers’ response to the protest led to further casualties, with live ammunition resulting in three serious injuries, currently under medical care.

The Congolese government continues to betray itself through the public forces it uses against its own people. The army and the National Police have lost their professional ethics. They act in contradiction with their status as protectors of civilians and their property. They’ve become human butchers.

We understand why, the national authorities procrastinate to send to Beni troops of identity and origin doubtful. These are the elements that the local population no longer wants, which unfortunately continue to flood the region. The population refuses them precisely because they mingle relentlessly with the killings (massacres) of the innocent and work constantly for the eviction of the natives. 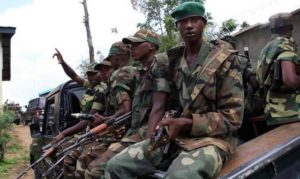 Here is the kind of military that Kabila favors in Beni. The people are opposed to it because they are assassins

And when such a security confusion is declared, the enemies sharing the same working order with this pseudo-army of the people make their irruption between PK23 and PK 24 on the road Mbau – Kamango to execute their routine work (the attacks and massacres).

Only one requirement is brandished: that the government relieves and removes from the region all soldiers with murderous and invasive ideology, especially the 31st Brigade, which is confirmed to be a troop of extermination of natives for obvious political reasons.