Beni under the panic of enemy weapons fire 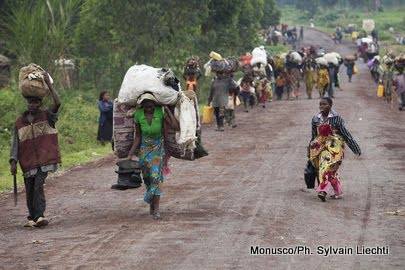 The populations are in disarray in the periphery of the city of Beni. the town of Ngandi, located 5 kilometers from the city center, was attacked last night at around 9 pm by attackers still under cover of alleged ADF. Besides this, there is an intense movement of the population of Mayangose who also fled to the city center of Beni.

But it was already noted that two young boys from Ngandi locality who had gone to the field during the day did not return. All indications are that they fell victim to the perpetrators who were preparing to make an incursion into the said town at the beginning of the evening hours. It would take time, until sunrise, to learn the details of the tragic events that characterize this area. A little to the north, in Mavivi, some firearms were also heard in a blurred climate during the night.

Moreover, this event comes at a time when the radius of Maboya has experienced the same shake since last week. The village of Matale located 10 kilometers from the center of Maboya is under the crackling of rifles whose authors remain poorly identified. The population flees in all directions, invaded by panic.

It is worth noting that a considerable movement of so-called slaughterers has intensified. Reinforcements are coming from the south of the great North Kivu, that is, from the axis of Goma. Axes occupied by the murderers around the city of Beni, on the Mbau-Kamango axis, around Oicha and on the axis of Eringeti are experiencing a disturbing strengthening. This time, these attackers are deploying openly, without being worried by the public forces, so that the local population asks a thousand questions about what the national authorities think. Any contest to understand that Joseph Kabila is carrying out his tragic plan on the region, because it is determined not to allow the holding of the elections of December 23, 2018. Hence, it is important for him to maneuver on all kinds of strategy possible.