Bishops of the former province Orientale launch a divine cry: « Do not spill blood » 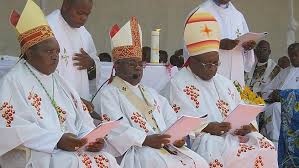 The prophecy of the waves of blood within the Congolese nation is as old as the regime that was erected at the head of the Democratic Republic of Congo at the dawn of the third millennium. From then on, what could be expected from a power whose strategy of reign is based only on violence? The country is under the grip of leaders who use all their expertise to create pseudo-rebellions against the state, to grow armed groups like wild mushrooms, to plan – organize – support massacres aimed at the extermination of the country. their own administered, as if an ideal power should sit on the beasts of the fields and on the birds of the sky or on the aquatic beings.

Any honest conscience can not be silent in the face of such an aberration. But the Catholic Church stands out, because to challenge men to respect the sanctity of human life is an order, a command that emanates from the will of the Creator. It is for this reason that CENCO continues to reaffirm its commitment to its prophetic role in the service of the Congolese nation.

The Provincial Episcopal Assembly of Kisangani, faithful to this same mission, paints the dark picture of the state of society living in its jurisdiction. To be better heard, it can only resume this divine order for the benefit of every man of good will: « Do not shed the blood » (Genesis chapter 37, verse 22). Here is the full text in PDF of the call of the Bishops of the Ecclesiastical Province of Kisangani gathered in ordinary assembly from February 26 to March 1, 2018: