Call for the march of February 25, 2018 everywhere in the DRC 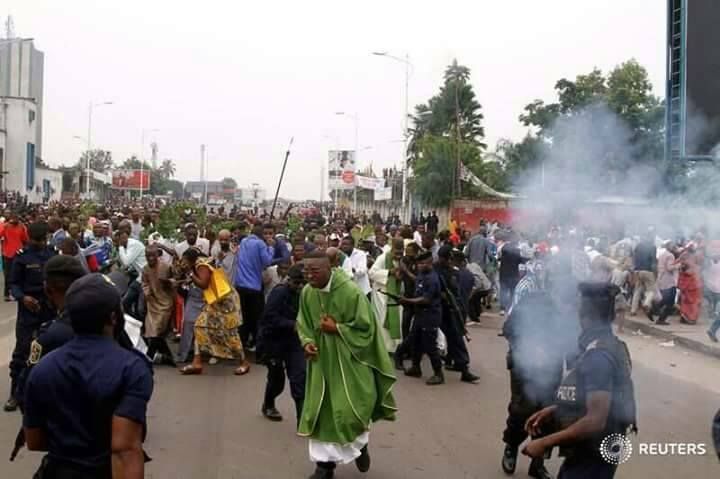 « By your perseverance you will be saved, » said Jesus to his disciples (Matthew chapter 24 verse 13).

« Congolese Catholic Christians, mobilizing the whole nation through the Lay Committee of Coordination, have become stronger in the Master’s Word. It is through the endurance of the tests of all kinds imposed by the regime in place that Congolese will win their conquests of freedom, the rule of law, justice and democracy.

On 25 February 2018, the Congolese people will still have to march for noble and just causes. The waves of anger (bloody repression, intimidation, terrorist acts, massacres, etc.) of the executioners continue to bubble, but will never overwhelm the primary ruler, so heroism remains an irrefutable ideal.

Moreover, there is no question of giving in to the misleading campaigns of the ruling authorities who seek to denigrate and discredit religious leaders who are concerned about freedom, democracy and social progress in favor of a people reduced by its leaders. in state of servitude. Moreover, the daily events only increase the reasons of the perseverance of the Congolese people in the program of march as organized by the Lay Committee of Coordination; these events are, among other things, the new page of massacre that opened in Ituri in addition to what has already been experienced in Beni, Kasai or elsewhere in the country, the almost mysterious irruption of herders not otherwise identified in Bandundu, the total loss of the purchasing power of the population and the misery that has reached its highest degree, the kidnappings and robberies everywhere, the phenomenon of human slaughter triggered in the city of Goma, the vertiginous escalation of insecurity in across all the important eastern cities of the country, etc.

Finally, the interview with Archbishop Fridolin Ambogo, the new Archbishop Co-agitator of Kinshasa, offered Vatican Radio a sufficient explanation of the need for the Congolese people to persevere to the end in the struggle that has begun. Here is the sound extract: