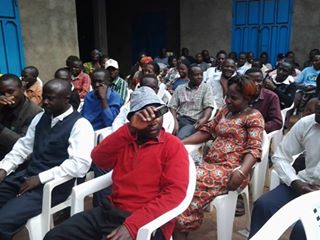 I. Since the launching of voter identification and enlistment operations in January 2017, the civil society active in the Beni and Lubero territories, as well as in the towns of Butembo and Beni, are recording several Irregularities in the conduct of the operations of the revision of the electoral register in progress in our country.

These decried irregularities result in:
– The inadequacy of the equipment deployed in the antennas to serve the registration centers in the above-mentioned territories and cities;
– The deployment, as if by mockery, of a quantity of voter cards not meeting the needs of the expected numbers;
– Many repetitive failures accused by electoral kits;
– The absence of awareness-raising activities on the process of identification and enrollment of voters by the CENI, apart from a few initiatives of Civil Society Structures and Organizations, while sensitizers and messengers had been recruited But not committed for that purpose;
– Increased insecurity in certain areas following military operations against armed groups;
– The lack of adequate security arrangements in some enrollment centers;
– The least motivation of the agents of the CENI and of the agents of the order committed to the registration centers due to the delay in the payment of their premium and the absence of the expenses of deployment;
– The bitter observation of several enrollment centers relocated or closed following the stock-out of materials and supplies and the insecurity in several groups and chiefdoms of the territories of Beni and Lubero as well as certain municipalities of the city of Butembo and of Beni;
– Lack of courtesy and lack of mastery of the mapping by some agents committed to the identification and enlistment of voters;
– Minorization of tokens for admission to the registration center by certain police officers in charge of the registration centers;
– Non-observance of the daily work schedule by some agents in several registration centers which start activities beyond 8 hours and close the Registration Centers before 5 pm, under the pretext of having reached the required number per day ;

II. The above observation leads us to believe that:

– A black hand of some ill-intentioned politicians who are unconcerned with the organization of elections in our entities would intentionally tend to undermine the electoral quotient of the aforementioned entities;
– The politicization of the Independent National Electoral Commission and the complicity of certain political actors in the over-equipped territories would be the basis of this discomfort which would lead to the prolongation of the period of identification and enrollment beyond the date envisaged for this purpose and delay the elections;
– The inequitable distribution of enrollment material would be aimed at dividing the populations of the same province.

III. In view of the above, the coordinations of the Civil Society of the territories of Beni and Lubero, as well as those of the towns of Butembo and Beni, recommend the following:

– to provide independently by making available within 48 hours, the equipment in all the antennas as planned;
– establish mechanisms for recovering lost time;
– to activate the messengers and sensitizers as planned;
– to restructure the Provincial Executive Secretariat as well as the antennas of North Kivu because the present leaders no longer inspire confidence.

– to present themselves massively at the registration center equipped with their complete identities to facilitate the process of their identification
– not to enlist on several occasions in order to avoid their cancellation in the electoral register;
– to resist and not to leave in the registration centers until the end of the hours planned for each day, that is to say 17h.

– to lay down the arms and allow the civilian population to enlist freely.

4. To Members of Parliament:

– Conduct a general audit on identification and enrollment operations, especially with regard to funds allocated to awareness-raising activities.

– To secure the entire national territory during the whole period of the electoral process;
– To rehabilitate the road infrastructures for better mobility in the supply of antennas and registration centers.

IV. To this end, the active forces of the territories of Beni and Lubero as well as those of the towns of Butembo and Beni reserve the Right:

1. To call on the CENI to close the registration centers until they supply electoral materials. A period of 48 hours is granted.

2. To call on the population to observe a day without activity on Thursday, March 09, 2017, to require the CENI Provincial Executive Secretariat to equip the antennas in difficulty with necessary and sufficient equipment.

3. To mobilize the Congolese citizens of the aforementioned entities, enlisted and not yet enlisted, to multiply the sit-in without return to the registration centers from Thursday 09 March 2017 to their supply.