Death squads in training in Kisangani! 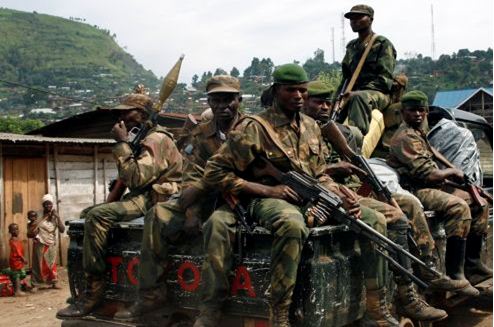 The death squads of Joseph Kabila are in full training in Kisangani. The alert comes from military sources of the FARDC who still want to be truly loyalist. It is the preparation of a great terrorist response in anticipation of popular reactions to a proposed referendum that the kabilist regime is preparing to launch during the unrest that it is pushing after the publication, by the CENI, of the electoral calendar of masquerade.

General Delphin Kahimbi was appointed to lead the formation of a brigade intended primarily to wage war on the people, who have become too demanding. The choice of recruits for this purpose is directed almost exclusively towards the ex-M23 and other volunteers available in the neighboring Republic of Rwanda, targeting in a special way hundreds of demobilized who are reported in the media. The border-colander of the Bunagana-Goma axis largely favors the transfer of these troops. In Goma, officers are established using means of the national army to channel the movement of these mercenaries to Kisangani where an inestimable amount of armament is stored for their endowment.

Already, it is confirmed the return to the country by this illicit way of the terrible and formidable criminal officers of the M23 among whom we can particularly mention:
1. Lieutenant Colonel Germain Bahame, a former escapee from Makala / Kinshasa prison in 2013, then a refugee in Rwanda;
2. Colonel Paschal Bagabo, formerly in charge of the security of Bosco Ntaganda, was the one who assassinated the intelligence officer assigned to the North Kivu military region after the reunification of the Government of Kinshasa with the government of RCD / Goma;
3. Lieutenant Colonel Munyakazi, Bosco Ntaganda’s attending physician;
4. Lieutenant Colonel Gaston, who was a M23 Battalion Commander, serving Bosco Ntaganda,
5. Major Kazungu aka Kilo Zulu, formerly Commander Second in charge of security of Bosco Ntaganda. It was he who carried out the special robbery missions ordered by Bosco Ntaganda, such as the recovery of $ 6 million in the Gold case at Goma airport; It was also he who was charged by the M23 to organize the robberies of convoys of bank vehicles in the city of Goma on behalf of Bosco Ntaganda and Makenga;
6. Major Emmanuel Ndungutse, security officer of Colonel Baudouin Ngaruye, deputy General Bosco Ntaganda;
7. Major Gakuru Safari, cousin of Colonel Baudouin Ngaruye;
8. Major Kanamugire, Major Battalion in M23 Wing Bosco Ntaganda;
9. Major Faustin;
10. Major Christian Manzi, escort of Colonel Vianney Kazarama who was the M23 spokesman;
11. Major Donati of the M23 Police; and many others because this list is not exhaustive.

It is of course following this criminal plan aiming at endowing these ex-M23 with full power of life and death over the Congolese populations that Colonel Emmanuel Nduguste, a member of this criminal chain of the M23, was recently appointed to Rutshuru in quality, the second commander of DEMIAP, on the recommendation of General Delphin Kahimbi himself, as the head of this military unit, which reports directly to the President of the Republic.

Today we discover why the Congolese government never wanted to officially repatriate the ex-M23, despite the insistence of Uganda which hosted many: because they could lose their effectiveness as elements of operations terrorists against the population, as they would become vulnerable to national and international scrutiny. The time has come for them to return illegally to the country for a mission whose criminal nature does not tolerate embarrassing witnesses.

It should be noted that two colonels, in this case Germain and Pascal mentioned above, are based in Goma to ensure both the reception of these mercenaries from Rwanda and their transfer to Kisangani. They are well covered by the protection of the local authorities and openly use the means of the FARDC (vehicles and benefits) in the accomplishment of their mission.

However, Joseph Kabila’s ex-M23 and mercenaries program does not focus exclusively on the city of Kisangani. Many other elements among them were gradually infiltrated in the main military centers of the country, especially in Kitona and Kamina. From these death squads, three thousand elements of troops have just been sent to Beni to support the operation of slaughtering civilians, with a view to accrediting the Jihadist thesis that has become one of the privileged schemes of the regime in place to find gain because of its ambition to perpetuate itself in power. Unfortunately, even the capital city, Kinshasa, is infiltrated so much in order to shed the blood of the innocents during these two months remaining in the year of slippage that the agreement of New Year’s Eve has conceded to the young Congolese dictator and his bloody regime.

Benilubero.com takes in witness all the opinions, in particular the international community which is well present on ground through MONUSCO and which closely observes the execution of the plan of the terrorism of the power in place, but continues to keep a guilty indifference, when the Congolese people sound their cries of alarm in broad daylight.