Down with Big Powers and their media hypocrisy over Congo Genocide 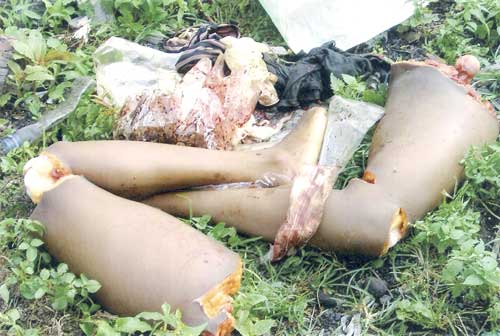 TO THE WORLD COMMUNITY AND THEIR COMPLICIT MEDIA IN HOLOCAUST:

DOWN WITH YOUR HYPOCRISY! HANDS OFF TSHISEKEDI!

1. Congo Genocide/Holocaust of over 9 million killed since 1998 by Kagame’s , Museveni’s , and their Trojan Horse and impostor in , Kanambe a.k.a. Kabila: you and your UN have done NOTHING to denounce it and to stop it, in spite of investigators’ REPORTS documenting it (The Mapping Report, Garreton/Gersony Report, Emma Bonino Report, etc.). On the contrary, you have been lifting Kagame and Museveni up, funding them, and covering up their crimes.

2. In Egypt, in Tunisia, in Syria, you and your UN have been siding on the side of the people against their dictators, publicly condemning their leaders; HOWEVER, in Congo, you have funded and allowed fraudulent elections (2006-2007), you have looked the other way and kept your mouth shut while the Rwandan impostor you imposed in Kinshasa (“‘Joseph Kabila’ is a Rwandan subject”, declared the Belgians and the CIA) has been assassinating innocent Congolese, attacking and brutalizing those who freely assemble and march, imprisoning and torturing those who dare speak out, and embezzling billions while the Congolese people continue to suffer and to die.

1. HOW, THEN, DARE YOU criticize or condemn THISEKEDI, when he VOICES the injustice and the sufferings of the Congolese people that you have funded and allowed to take place since 1998?

2. HOW, THEN, DARE YOU believe that Congolese people do not know the difference between Democracy and these rigged and criminal “elections” that you are funding in a country that is NOT ONLY UNDER OCCUPATION (Congolese Kivus are controlled by Rwanda as the US State Department has declared, and North-eastern Congo is controlled by Uganda as everyone KNOWS), BUT ALSO the GOVERNMENT OF OCCUPATION in Kinshasa is controlled by Rwandan Paul Kagame whose agent, the Rwandan Tutsi Hyppolite Kanambe masquerading as “Joseph Kabila” answers to him, NOT TO THE CONGOLESE PEOPLE, and you all hypocrites know this too.

3. DO YOU HEAR THE CHANTING OF THE CONGOLESE PEOPLE AT THISEKEDI’S GATHERINGS? WHY don’t you translate them for your people and for the people of the world? You RACISTS! You still THINK you can look down on and ignore the aspirations and the sufferings of the Congolese people? We bleed and feel pain just like you, we get mad angry for the raping and mutilation of our women just like you!

5. CONGOLESE PEOPLE ARE DETERMINED TO WRESTLE THEIR LIBERTY TO-DAY, IN THE IMMORTAL WORDS OF AMERICA’S FOUNDERS: “We (Congolese), hold these truths to be self-evident, that all men are created equal, that they are endowed by their Creator with certain unalienable rights, that among these are LIFE, , and the PURSUIT of Happiness…” These eternal words do not say “ONLY WHITE men or ASIAN men are created equal”, but, “ALL MEN”!! THERE IS NO TURNING BACK, NO TURNING BACK!!!!

FOR THE CONGOLESE PEOPLE’S ASPIRATIONS