FARDC: a redevelopment that betrays a preparation for war 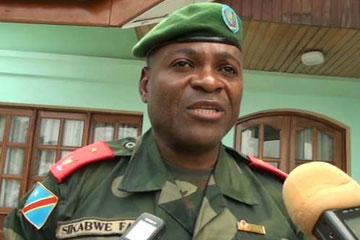 In a particularly crucial moment, when the country’s horizons are very « clouded », President Joseph Kabila has just surprised the world by provocative permutation at the top of the national army. It is a visible act of challenge that launches the Congolese president to all those who think to get him caught by pressures that are far from being achieved. It is also a sign of sabotage against the Congolese people who see their executioners rededicated coat of arms and crowned with honor.

In fact, General John Numbi, the assassin of Master Floribert TCHEBEYA, former director of « Voix des sans voix », is raised to the rank of Inspector General of the FARDC. What could such an appointment mean, if not a challenge and an insult to all those who still believe in human rights?

At the General Staff of the FARDC, General Didier ETUMBA is removed from office in favor of Lieutenant General Célestin MBALA MUSENSE. What is there to remember Celestin Mbala? He is the man who was sent by President Kabila to install in the Beni maquis FARDC who would become false ADF, these famous partners of the murderers of civilians while participating themselves in this dirty work. The rise of General Mbala to the top of the national army clearly means that the public forces at his disposal, in other words the national army, are now serving the slaughterers. Could it be with this gesture that Joseph Kabila finally intends to seal the fate of the DR Congo?

Another notable figure in the reshuffling of the FARDC military hierarchy is the appointment of General Gabriel Amisi aka Tango Four as Deputy Chief of the General Staff for Operations. What a disappointment for the Congolese in North Kivu, when we remember the great treason the FARDC suffered from a criminal officer in Mushake? Indeed, it was December 8, 2007, when the public witnessed the debacle of the Congolese government soldiers against the rebels of the National Congress for the Defense of the People, CNDP in acronym, in Mushake, in Masisi territory, in the province of North Kivu. General Amisi aka Tango Four, on the orders of President Joseph Kabila had delivered multitudes of FARDC and all their military arsenal into the hands of the CNDP. This event must have caused carnage that the Congolese army has never known in its military history. From then on, as a reward, Joseph Kabila passed Tango Four of Honor to honor and elevation to elevation. Now he becomes the second of the one who installed the murderers in the region of Beni to exterminate the natives.

To be limited to these three figures among the beneficiaries of the new appointments made by the head of state, it should be noted that Joseph Kabila has just put on his squadrons the death of a new power over life peaceful populations delivered in holocaust. It is an open declaration of war against the people and against their efforts to obtain democracy, the rule of law, justice and freedom.

And so, one can rightly wonder that it is by surrounding criminals, in addition invested with full power to sow desolation and death, that Kabila will persuade his people and the world of his will to drive. the nation to the elections? Is it with these people who are under the sanctions of the international community that Joseph Kabila claims to bring back the rule of law and to bring justice to the victims of the massacres and the cavalier insecurity lived in the east of the country?

Those who claim to be leaders of the political opposition and of civil society, as well as men of troops still animated by patriotic sentiment, should stand together to block the sad adventure of Mr. Kabila before it is late.