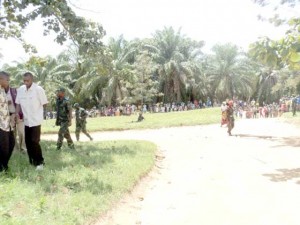 Each day that passes cashes its share of victim in the space of Beni-Lubero.

On the evening of Wednesday, December 14, 2016, an odious crime comes to dismay the city of Kirumba, south of Lubero. Mr. Marcel TENGENEZA was shot and killed in his own home by armed men not otherwise identified. TENGENEZA is a highly regarded human rights activist. He was a protection promoter of PAP-DRC and was currently serving as an agent for the Regional Council of NGOs, CRONG in short. He also served as Vice President of Civil Society in Kirumba during his lifetime. This morning he was still participating in a workshop organized by the Committee of Wise Men under the auspices of MONUSCO. And now he's gone, gone "ad patres" since 8 pm tonight.

Oh blind crime! How long? May his soul rests in peace !