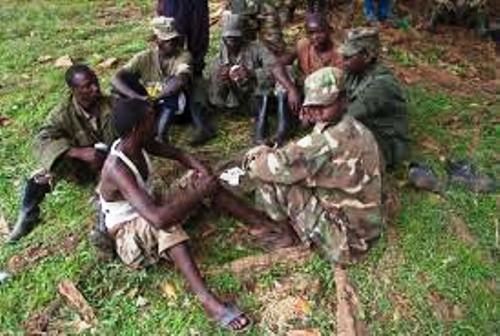 The truth is stubborn. Today the confirmation of crime of President Joseph Kabila springs from all corners of the world. It has never been denounced: the commander-in-chief of the alleged ADF who massacre the innocents in Beni is called « Joseph Kabila ». The remorse led the Congolese military that he used under a false identity of Ugandan rebels ADF burst new evidence of his responsibility in the blood of innocent people paid to Beni. These witnesses who found their salvation in exile had the courage to deliver this truth to the journalist Jean-Luc KIENGE in America as follows:

Among those who gave them orders to commit the massacres of Beni are the names of Tango Fort and General Mundos. These former officers claim that they have been ordered to be very sadistic and to kill the Nande without mercy, with a promise to acquire some coltan concessions to exploit them and be rich.

After having committed all these crimes that they considered before as a « mission » in the service of the State to save the Congolese nation from Islamist terrorists, these ex-FARDC reported that they came to understand that the goal of Joseph Kabila was to prepare a civil war to prevent the organization of elections.

« He has just used us to prepare his civil war ground for him to remain president for life and later to hand the hat of all these killings to the former Congolese Minister now in exile, Mr. Mbusa Nyamwisi, as being the sponsor of the crimes in Beni « , they explained.

They said they took with them several documents that directly incriminate the two generals and President Kabila, not to mention some associates whose names they have names.