Francois Hollande, French President, receives a double request from the Nande community for Beni: military intervention of France and an international investigation 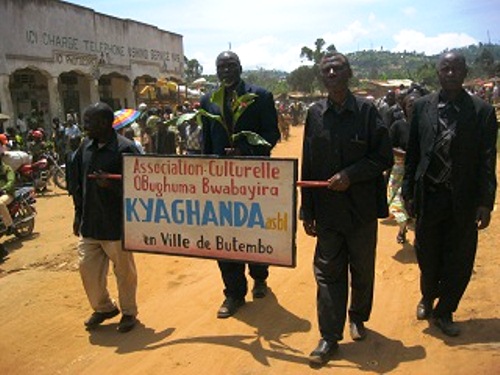 Subjet :
– Request for a military intervention by France to end the massacres in Beni
– Request for an international criminal investigation into the crimes committed against the populations of the Territories of Beni and Lubero.

Exasperated and horrified by the ongoing massacres in the territories of Beni and Lubero, the Yira Nande Community, indigenous to these two territories of the Democratic Republic of Congo, Province of North Kivu, has decided to send you its cries of distress and to solicit the intervention of the French army to protect its populations, targeted by an appalling campaign of massacres. For nearly two years now, whole families have been killed extremely cruelly, all too often in close proximity to the positions of the government army (FARDC), even when survivors come to the soldiers to plead with them. The massacres last. The tears and moans of the victims, dying under the blows of a machete, the main weapon used by the killers, reach the ears of the authorities who let it happen.

People from the Yira  » Nande  » ethnic group, the main community in the Beni and Lubero territories, are targeted by killers from neighboring Rwanda and Uganda. They operate in an organized manner and with a degree of cruelty that betrays an indisputable genocidal motivation. The counts of civil society are that more than 1,500 people were killed while 200,000 indigenous people, out of a population of 1,200,000 inhabitants, were driven out of their land, since reoccupied by the genocidaires arriving from Rwanda under another pretext.

Calls from civil society, the mobilization of the Congolese diaspora in all its diversity, the reactions of several elected officials from the Beni-Lubero constituencies and members of the opposition in Kinshasa, have so far been confronted with silence, iIndifference and to the laissez faire of the Congolese government. Demonstrations in the Congo against these massacres are prohibited. Several personalities in Goma and Kinshasa were severely beaten by the police and imprisoned for having dared to show their solidarity with the victims of the massacres, an attitude which betrays the complicity enjoyed by the genocidaires on several levels of the apparatus of the Congolese State. In Beni, several dozen killers, captured and handed over to the authorities, were systematically released from custody, as reported by the UN Group of Experts on the DR Congo in their report of 23 May 2016 (§ 205-207 ) And which betrays the will to make the massacres last.

The Yira  » Nande  » people, victims of this holocaust, with the support of the other Congolese communities, nevertheless persuaded themselves that it was the target of a regional conspiracy and the forces of the shadows, or less linked to the current regime in Kinshasa, determined to eliminate it by massacres, killings, forced displacement and the imposition of the conditions of existence leading to its destruction.

As a permanent member of the UN Security Council and one of the guarantors of respect for the UN Charter, adopted following the horrors of the Nazis in Europe, France, we are persuaded, can not remain indifferent to the reedition of genocidal crimes, which is the case in the Beni and Lubero territories, against the Yira  » Nande  » populations. France, Mr President, is not only a permanent member of the UN Security Council. It has demonstrated its ability to put an end to the plight of populations trapped in crises that degenerate into massive violations of human rights. It was in this capacity, for example, and in response to the distress cries of the Malian people, that it triggered operation Serval in January 2013 and prevented Mali from falling into a jihadist chaos. It did the same with operation Sangaris in December 2013, in the Central African Republic. Long before the two operations in 2003 in Ituri (DR Congo), the inter-ethnic violence between Hema and Lendu was stopped mainly by the French army in the context of Operation Artemis that lives have been saved!

The Yira community « Nande » is aware that in the long term, it is the Congolese state that has the responsibility to protect its populations, and that the aid of foreign powers must be only punctual. Unfortunately, faced with a power whose complicity with the genocidaires is no longer to be demonstrated, the Yira  » Nande  » have no choice but to seek protection from France, military and strategic power better placed to intervene on the ground and in international fora within the framework of the responsibility to protect. These populations can no longer expect anything from the current regime in Kinshasa to stop this murderous campaign.

It is a regime which, in addition to the massacres it allows to commit itself, deliberately maintains chaos to aggravate the distress of populations already wounded. For example, it has undertaken to re-arm militias and other armed groups in eastern Congo such as the Nyatura, APCLS, Mai-mai Simba of Mambasa, and to set up others (Mai-mai Kyaghanda -Yira, recycling ex-M23 reinforced by the recruits of colonel deserter Richard Bisambaza). Still within the framework of the deliberately maintained chaos, the same regime of Kinshasa organizes the influx of Rwandan criminals by thousands on Congolese soil: More than 60,000 Rwandan criminals have been forcibly seized by the authorities in the bushes of Eringeti (Beni), Tchabi and Boga (Ituri), most of whom illicitly carry weapons to terrorize indigenous peoples and force them to abandon their land.

In addition, the General Prosecutor of the International Criminal Court, who copies us, is also solicited, in order for an international ICC investigation to be carried out on the ground in Beni, that the perpetrators of these crimes be identified, victims get justice and reparation and that the families hunted out of their land recover their property. The Yira Community « Nande » is naturally ready to collaborate with the investigators and is at their disposal.

Mr. President, however, this investigation can only take place and produce credible results if the French army is deployed on the ground, hence this solicitation to which we ask you to accede. We are at your disposal and are ready to meet with you to explain the grievances of our populations.

In the meantime, please accept, Mr. President, the expression of our highest esteem.

ANNEX
– Map of the areas of massacres.