General Mundos, the key element of the massacres of Beni, on the run! 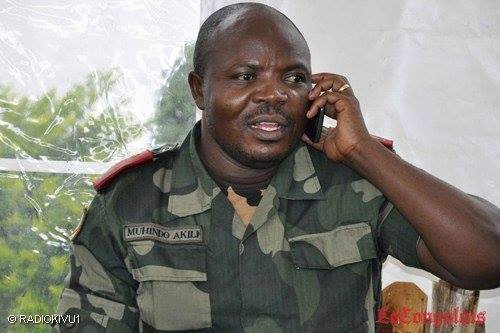 Joseph Kabila has allegedly exfiltered General Mundos, the key man in the assassination of Colonel Mamadou and the massacres of Beni, to a destination still kept secret. According to information received in the editorial office of Benilubero, General Mundos would not have been in the country since Tuesday, February 21, 2017.

As a reminder, a few days ago, this general was cited by an accused in the so-called Trial on the massacres of Beni which is still under way in Beni. Suleiman, it is about him, pointed finger at Julien Paluku the governor of North Kivu, Mr Masumbuka Nyonyi, the Mayor of the city of Beni, General Mundos and Mr Joseph Kabila as the main sponsors of the massacres of Beni. These revelations of Suleiman have only confirmed what many reports of both the United Nations and human rights organizations have always reported. After hearing the mayor of the city, the public expected that the three others mentioned above would also come to the bar to explain.

But unfortunately ! Mundos may no longer be heard of

According to a well-informed source and a witness of the facts of which we are referring to for his safety, Mundos would have gone through Dungu to Juba, in southern Sudan, from where he would have taken a flight to a still unknown destination. Other sources claim that he would have flown to North Korea with which the Kinshasa regime would maintain trade relations of uranium.

Should we finally rejoice at the departure of Mundos from the country? Certainly not because its exfiltration does not augur well in the sky of North Kivu and comes to confuse all the tracks that would lead to the truth about the massacres of Beni. Indeed the man leaves but his vacuum is already filled by Mr Kakolele to whom Joseph Kabila would have entrusted the continuation of the mission that was entrusted Mundos. As of February 23, 2017, Mr. Kabila would have received him to give him specific money and instructions for that purpose. This is what would explain the stay of Joseph Kabila these days in North Kivu. The next few weeks may still be dark in this region. It is to be feared that the presence of the M23 in the territories of Rutshuru and Masisi and the ensuing skirmishes are a prelude to a chaos in which Joseph Kabila is determined to plunge the whole country in the days to come.

As we close this mail, another phone call joins us and confirms this exfiltration but thinks that Mundos would have been entrusted with a new mission, that of recruiting foreign terrorists who would come to lend a helping hand to Joseph Kabila when the time comes. And it is not surprising that he had begun this mission in southern Sudan whose rebels were already incorporated into the FARDC. If all this information were confirmed, the trial of Beni is only a mere montage to blame the indigenous population yet victim of these massacres and the dialogue of Kinshasa a masquerade to distract the people.

Be of all ear! Benilubero will keep you informed of the progress of this file.