Here is the culmination of Kabila plan in the massacres of Beni: Kakolele sacrifices himself to launder the crime of State! 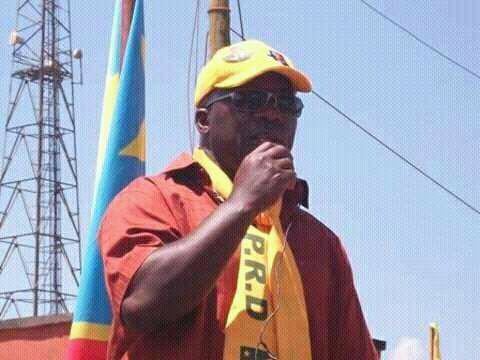 After vainly turning round and round, without finding a scapegoat to put on the crime of the massacres that have wrested more than 1700 girls and sons from Beni-Lubero in Beni, not counting the innumerable kidnapped, a brave volunteer, Son of the middle, blinded by the cupidity of money, obviously an accomplice of this tragedy, at last presents himself as a holocaust to pay the ransom which the Congolese state is debtor before national and international opinions.

Indeed, it was by suicidal courage that Kakolele Bwambale, aka White Eagle, self-proclaimed general, had surprised everyone by claiming the command and planning of the nascent armed group called « Body of Christ » in Butembo and Beni. And every witness of this statement questions whether the person concerned really had his conscience in shape or was in all his faculties to weigh all the implications of such a statement.

As Commander-in-Chief of the Body of Christ, Kakolele is responsible for the killings of UN peacekeepers killed in Butembo on 19 December 2016.

Barely three weeks have elapsed since the day when the fighters of the Corps of Christ attacked the town of Butembo on December 19th. Officially, one UN soldier was killed and two others wounded on the occasion. However, first-aid workers and other witnesses mention at least four peacekeepers who died as a result of the fighting that day in Butembo. In retaliation, MONUSCO immediately decided to target all local youth as a whole, calling it an integral part of the militia that had caused so much damage to the UN mission on the ground.

It is therefore consoling that the real culprit for the deaths of United Nations peacekeepers in Butembo is now personally declared. The local population of Butembo, who also suffered the damage caused by the Mai-Mai attack of 19 December 2016, is anxiously awaiting judicial proceedings against the self-declared perpetrator of the crime. Both from the Congolese government and from the international community.

For if the lords of the former Ituri wars were not spared from punishment for crimes they have committed against their compatriots and Agencies of the international community, likewise Mr. Kakolele Bwambale has an obligation to answer for the criminal acts of murder, massacre and looting which his only declaration of those days suffices to acknowledge his charge and responsibility.

Hold! At the time when Kakolele declared himself the patron of the Corps of Christ’s fighters or militiamen, he remained strongly dressed in the flag (that is, fervent member) of the PPRD, the party that holds the presidency of the country and for which he publicly and constantly reinforce its commitment especially since the year 2011.

Indeed, no one is unaware of the zeal with which Kakolele aka White Eagle defeated campaign for Joseph Kabila in Beni against his own brother and political godfather Antipas Mbusa Nyamwisi, to whom he should be grateful for having fashioned him a personality of the rank of leader at the time of the RCD / K-ML political-military movement. From then on, having tasted the juicy delight of Kabila’s predatory regime, Kakolele has consistently become a very faithful « race boy » of the Kabilite regime to the detriment not only of his own Beni-Lubero brothers but also against any tendency proving to be critical of the nepotism of the regime in place. As such, divorce was radically consummated between Kakolele and his former boss of the RCD / K-ML, the Hon. Mbusa who was distancing himself from a predatory-looking regime.

In order to maximize the success of Kakolele’s destabilizing mission among his brothers and elsewhere in eastern DR Congo, the regime deliberately ignored his professional status so that no one knows whether he is civilian or military. This confusion enabled the current government to use it effectively in paradoxically subversive missions against the country’s institutions, among other things to create armed groups, to supply armed militias according to the regime in place, and so on.

Hence, by declaring himself today responsible for the organization of the « Body of Christ » militia, it is fitting to understand that this militia is indeed an enterprise that the expiring regime of Kabila wanted to set up in to keep the east of the country in chaos and not allow a passing of power by the elections that the people expect before the end of this year 2017.

Over the past four weeks, BLO has followed with attention the passage of Kakolele, with the support of the Kinshasa government, especially with the support of DEMIAP, a military intelligence service directly under the presidency of the Republic, in China , in Nairobi, Zambia, then again in Nairobi, and in Uganda, where he will pass very discreetly to debouch at Beni and give the declaration of his adventure. Besides, none of the contact data that Kakolele had with the M23 group in Uganda escaped the investigation services of BLO.

Alongside Generals Mundos and Fall Sikabwe, Kakolele is an active supporter of the massacres in Beni

The thorough investigations demonstrate that Kakolele Bwambale is personal friend to these two generals heavily involved in complicity in the ongoing massacres in Beni.

While General Fall Sikabwe was still the commander of the Ituri military region, Kakolele from Kinshasa and a joint operation with General Fall kept supplying the Simba militia under command from the late Morgan Sadala to Mambasa and Epulu. It was thanks to this supply that Morgan operated the numerous crimes, including the massacre of the Reserve Guards at the Epulu Wildlife Reserve as well as the Okapi protected on the spot.

Subsequently, he sent a former Mai-Mai commander of the Vurondo group called Saperita to General Mundos whose headquarters had just been installed in Mambasa to help him recruit indigenous Nande to associate with Killers of Beni, to help the Congolese government convince international opinion that it is indigenous Nande who are slaughtering their own brothers. Saperita’s return to the field during this mission was repeatedly denounced by Benilubero Online publications, including the involvement of Governor Julien Paluku, who provided the necessary motivation to stimulate this recruitment.

The reappearance of Kakolele is at the heart of the completion of the plan of the Congolese government of Joseph Kabila aimed at the ousting of Nande in their territories by Rwandan illegal immigrants.

Convincing dishonestly the views of the executioners of the victims of the Beni massacres as Nande nationals, it is the main concern of the Kabila regime that it hopes to cover its responsibility in this crime which it deliberately organized to impose Rwandan immigrants to populations of Beni, Ituri and also Lubero.

Soon Kakolele will impress his opinions by presenting to the public a crowd of nationals whom he will falsely put on the color of the murderers. Indeed, Kakolele and his colleagues Mundos and Fall Sikabwe feel they have won their bet against the background of the following calculation:

1 / Numerous victims of kidnapping, captured in fields or roads by their complicity in collusion with the slayers they support in the maquis of Beni, were subjected to forced training to become killers alongside their own executioners.

2 / Through Saperita, they were able to recruit indigenous people who thought they were enlisted to defend their brothers against the slaughterers, while the intention of their masters was to turn them into a scapegoat with responsibility for Crimes of which the national community and the international community are demanding the judicial account.

These are the two categories of victims kakolele, for having been paid by Kabila’s crime money, is trying to turn into executioners, hoping that this single gesture will eliminate the determination of the International Criminal Court to demand a rigorous account from the Congolese government at About the crimes echoed from Beni and southern Ituri.

Final goal: Crowning of cutthroats as indigenous, while indigenous people are condemned and dispossessed of their rights

Kakolele’s hasty intervention, which, according to the VOA journalist’s interviewer, provided a maximum of effort to provoke this report, is not by chance. Hurry up. It’s time to enlist in North Kivu. Finally, it is necessary to crown the clandestine and terrorist hosts of the State by rewarding them against the will of the Congolese Nationality.

Hence, aboriginal people must be emptied by an abusive judicial conviction. By making them bear the responsibility of slaughter, they can be relegated far from their land by the prison. Now, the terrorist invaders will soon be endowed with cards of voters like any native, and will settle firmly in the land from which they have pushed out the owners. The massacres will then be silent. And, Kakolele, supported by Joseph Kabila, will declare that he has finished collecting the killers and will proclaim himself a pacific hero. And, immediately, supported by these « new Congolese false » in North Kivu and Ituri and ex-M23 / ex-CNDP, Kabila will be able to build an Empire where he and his dynasty can rule by a regime of terror in the east of the country, in spite of any forecast giving hope to a possible political alternation at the head of the giant Congo.

This is how the end of the humiliating game of humiliation of a people and a nation unfolds.