Is the attack of Joseph Kabila’s residence linked to the Cargo seized in Goma? 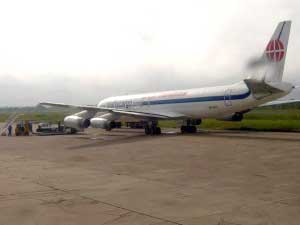 Last month a cargo plan registered in the US (DALLAS-TEXAS) was seized at the airport of Goma in Kivu province in DRC (a troubled region full of militias controlling congo mineral resources) through impostors originally tutsi rwandese « general Bosco Ndaka » and Nkunda » both wanted by the International Court of Justice for crimes against humanity in DRC.

A Dallas-based Gulfstream V luxury jet seized for gold smuggling last month by authorities in the war-torn eastern region of the Democratic Republic of the Congo is also under investigation for drug running by the U.S. Drug Enforcement Administration.

The Gulfstream implicated in gold trafficking in Goma was on the DEA’s watch list, according to reporter Melanie Gouby from the Radio Netherlands Worldwide (RNW) news service, as well as the BBC World Service.

Contacted over the weekend, Gouby identified the source of the drug trafficking allegation to us as Lambert Mende, a Minister in the Democratic Republic of the Congo, and the government’s chief spokesman.

« Mende told me the plane was wanted by the DEA for drug trafficking, » she told us.

Desiere’s Gulfstreams (he has three) are based at Fort Worth Alliance Airport near Dallas, the same airport where the fleet of planes belonging to the Drug Enforcement Administration are based.

The international gold smuggling case, already being described as « murky » in published reports, took an even darker turn over the weekend, when it claimed its first victims.

In Nairobi, a senior Kenyan official investigating the gold-smuggling ring was assassinated as he returned home from work.

Witnesses and police said Kenyan Commissioner Joseph Cheptarus was confronted by three armed men who had been lying in wait. He was shot him four times in the stomach before the gunmen fled in the wounded man’s silver Toyota SUV.

Cheptarus had just been assigned the politically sensitive task of investigating who was behind 2.5 tons of gold recently smuggled into Kenya from the eastern provinces of the Congo.

The shipment was linked to the seizure of the Gulfstream in Goma, Congolese Minister of Mines Martin Kabwelulu told reporters.

And in the Congolese capital of Kinshasa a « heavily armed group of men » launched an attack on the Presidential compound of Joseph Kabila.

The assault left six dead, in what a Congolese government spokesman called « an attempted coup. »

In a gunfight lasting several hours, the men used assault rifles, RPGs and machetes to attack the home of Congolese president Joseph Kabila in the capital Kinshasa on Sunday. At least six of the assailants were killed, according to a government spokesman.

The Gulfstream arrived at the airport in the frontier town of Goma on February 3rd, carrying four shady international businessmen and a stash of more than $6 million in cash.

It had already been partially loaded with a cache of more than 450 kilos of gold, when it was surrounded by soldiers from the Presidential Guard of Congolese President Laurent Kabila. 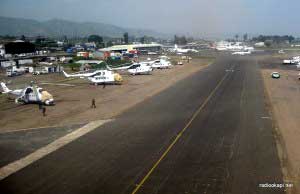 Congo has a rich history of political assassination, violence, intrigue and conspiracy.

Decades ago Congo’s first independence leader was assassinated and replaced, with the help of the CIA, who objected to Patrice Lumumba’s Marxist posturing.

In 2001 Joseph Kabila became president, inheriting the job from his father Laurent who was killed by one of his own bodyguards. Five years ago Kabila Jr. won Congo’s first multiparty election in nearly half a century. He hopes to win again in November, but faces an array of determined opponents, some of whom are apparently unimpressed by parliamentary niceties.

Six outside nations have troops stationed inside the Congo. They are supposedly assisting the Congolese government, a weak and degraded state unable to exert its authority over much of the country.

In the mineral-rich eastern provinces near Goma, where the Gulfstream landed, a patchwork of rebel groups fighting to oust Congo’s president, Laurent Kabila, joust with the Congolese government for control, and the lucrative smuggling out of diamonds, gold, coffee and ivory.

Those planes are coup magnets, for sure.

A number of readers alerted us to the story of the $60 million Gulfstream V luxury jet from Dallas seized in Africa for suspected gold smuggling last month, perhaps because of our recent reporting on American-registered airplanes busted for drug trafficking in Africa (and mistakenly identified with Al Qaeda).

If we wanted to look for similarities between the two cases, they weren’t hard to find.

The Gulfstream in our earlier story, busted with a half-ton of pure cocaine two years ago in the West African nation of Guinea Bissau, was blamed by UN officials for precipitating a violent coup in that country that left it with the unenviable reputation as  » Africa’s first narco-state. »

Now another American-registered Gulfstream, this one grounded in the Congo’s strife-torn but mineral-rich eastern region, appears to be having a similar disquieting effect.

In defiance of the Congolese government’s mining ban, designed to cut off funds being used to fuel the conflict in that strife-torn country’s mineral-rich eastern provinces, the international gold-smuggling ring is making regular flights into Goma exchanging cash for gold.

And making no bones about it, either.

Behind the Gulfstream stands a motley crew of Texas movers and shakers.

This group is all of that. And more.

One other striking similarity between the two stories is the kid glove treatment accorded some of the principals. Start with the owner the plane.

The Dallas News repeatedly calls him « philanthropist David Disiere, » as if that were part of his job description.

In reality (as opposed to in Dallas) calling him « convicted felon David Disiere » might be a more accurate description.

Desiere owned several insurance companies, including Cascade Insurance Co. in Shreveport Louisiana. It was doing poorly. Then, it was going bankrupt.

Alas, CEO Desirie was on the hook, according to Louisiana insurance codes, for as much as $27 million of the expected shortfall, according to published reports.

Who Ya Gonna Call?

Edwards will apparently take money from anyone, as witness the ‘loan » he accepted from drug smuggler and life-long CIA pilot Barry Seal when the two men briefly crossed paths and discussed the classic slots online scene in a Las Vegas casino on a night when Lady Luck had not been smiling on the Guv.

Sensing an opportunity, Desiere slipped 100 big ones to Edwin Edwards, and his big liability went away.

Alas, the FBI had a big hard-on for Edwards, who for years had thumbed his nose at them, and operated with impunity, living up to his famous saying that « He would never lose an election in Louisiana unless he got caught in bed with a dead girl or a live boy. »

Thus the FBI was listening in when Ed and Dave chatted each other up on the phone more than 60 times. You know, just two old boys, speculating ’bout this and that.

Some of that speculating’ must have hit an FBI nerve, however, because Desiere in short order became a co-defendant of notorious former Louisiana Governor Edwin Edwards in a trial in 2002.

The citizens and officials of Louisiana extended a helping hand. Someone else paid to clean up Desirie’s mess.

And Desiere, facing 200 years in prison on charges that included conspiracy, insurance fraud and witness tampering, rolled on Edwin Edwards instead, and testified against him.

The case put Edwards behind bars for eight years.

Referring to another squishy deal that allowed Disiere, even after his conviction, to do business in New Mexico, an insurance industry publication called « Insurance Journal » ran a story about Desiere that didn’t use the word philanthropist at all.

Desiere was the felon referred to in the headline. But by then he had moved to Dallas, bought a mansion that puts J.R. Ewing’s South Fork to shame, and become a philanthropist.

As far as the gold smuggling Gulfstream goes, Desirie claims to be an innocent owner– and where have we heard that phrase before–and denies any wrongdoing in the case.

However he does all this through his spokesman, Dan Allen, who was the press secretary of House Majority leader Tom DeLay, until DeLay was convicted and forced to resign from the House in disgrace.

Thus his protestations of innocence somehow lose a teensy bit of their force.

At least for some. (You know who you are!)

His airplane, a $60 million Gulfstream V top-of-the-line luxury jet, was not under his control, Desirie avers, (through former DeLay spokesman Allen.)

According to Desiere, the Gulfstream V had been leased to CAMAC International, a Houston oil-trading company owned by one of that city’s richest men, whose brother, perhaps not coincidentally, is one of the « businessmen » being detained in the Congo.

The plane was the responsibility, in other words, of a prominent Texas oilman.

Accounts differ on whether Houston oilman Kace Lawal, who holds dual Nigerian and US citizenship, is still a fugitive from justice in his native Nigeria, where he stands accused of stealing 10 million barrels of oil from the Nigerian government.

But all agree on this: Lawal was a major fundraiser in Hillary Clinton’s 2008 presidential campaign.

Ironically, just last year Secretary of State Clinton found herself in the frontier town of Goma in the Congo, where the Gulfstream is currently impounded.

She was there speaking out, « Against the trade in ‘conflict minerals’ that has funded a cycle of conflict there that has left more than 5 million people dead since 1998 and spawned an epidemic of sexual violence. »

There’s General Bosco, the African general indicted for war crimes by the Hague…

And Carlos St. Mary, a Houston diamond merchant who claims to have graduated from West Point in the Class of 93, but didn’t, who’s being set up to take the fall…

St. Mary already owes judgments totaling several million dollars in Houston and Arizona which he has done nothing to repay. Meanwhile he’s been living in a four-bedroom house with a pool in the affluent Houston suburb of The Woodlands.

We spoke to one of the Arizona businessmen who’d been taken to the cleaners by St. Mary.

In a number of instances we’d seen, when things went south the bad guys began suing each other, more or less pro forma, as if to indicate that whatever had been going on, they’d been against it from the start. Was this like that?

Not in this case, he told me. « Carlos St Mary and my partner are related, » he said. « They’re first cousins.

« Carlos came to us with a proposition that looked good, and Mike talked a bunch of his friends into investing. It’s hard to tell what really happened. Something blew up on him that had nothing to do with our agreement, and everything went sideways. »

Peter Verszke is an attorney in Houston who sued St. Mary on behalf of three clients who’d lost roughly $800,000 apiece. « He’s a very smooth operator, » he said, of St. Mary. « He’s very slick, very friendly,. And he know a lot of people in Houston. »

« He told a story that ought to have been on Broadway, a wild story that included people who used to work for the CIA. »

« My clients settled with him. He said he’d contact some of his CIA friends over there to see if they could help him get their money back. But when it came time for St. Mary to begin repaying what he owed, he refused, even though he’s living in a 4-bedroom house with a big pool in the Woodlands. I wanted to take further measures, but at that point my clients decided just to drop it. »

This looks to be another elite deviant case study, and a further illustration that « equal justice under law » is a joke in today’s America. But the hand has yet to play out.

And we’re looking for the responsible Federal Agency in charge of keeping mayhem to a minimum.