Ituri again boiling and in carnage. Who fires the fire? 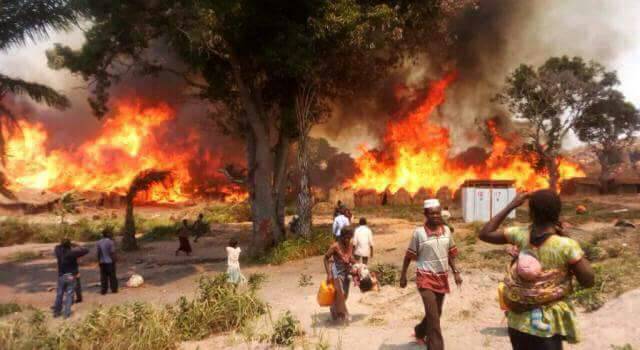 From February 02, 2018 to these days, we see Ituri fall back into its sad black page from the years 1999 – 2003. The territory of Djugu moves to the rhythm of violence, massacres and systematic evil destruction. The Lendu of the Walendu Pitsi community have gone into hostility against the Hema of the North Bahema community and vice-versa, the machete raised against every human being opposite, the fire to reduce to ashes all the antagonistic areas.

No one can state the exact number of human casualties, when one observes how more than seventeen localities have been systematically not only devoured by the machete, the arrow, the spear and the stick, but still consumed by fire. The survivors are in the « save who can »; they flock to the city of Bunia, neighboring Djugu territories and neighboring Uganda. The speed of expansion of this horror is so frightening that its vapors already sweep the capital of the province of Ituri, the city of Bunia. Indeed, Tuesday, February 06, 2018 Bunia was panicked against the backdrop of clues infiltration belligerents and antagonist Djugu in this agglomeration. Many families remained homeless all day, daily activities paralyzed, with tumults that caused damage here and there. Unfortunately, the event evolved in such a way as to create uncertainty on the Bunia – Mahagi road north to cause intermittent breaks in road traffic. Violence is gaining ground fast; February 08, 2018, it is reported the attack of the Lendu against the Hema Logo, 18 kilometers from the town of Drodro. In short, once more it is almost all the territory of Djugu which is ignited.

Who is pulling the strings?

The preparation for the rebound of the interethnic war between the Lendu and the Hema is as old as the phenomenon of the Beni massacres. Indeed, when the executioners of the people positioned criminal invaders in Boga, Tchabi and Beni, it was obvious that a real threat of insecurity was lurking both Ituri and its neighbor Beni.

The Beniluberois, who were more wary of the Machiavellian plan on the march, did not fail to multiply warnings to awaken the attention of the opinions on the plot that would ignite a new fire in Ituri, but to no avail. Many felt that these warnings are simply the transposition of the feeling of a people (Nande) exasperated by the pain of the massacres of its members. And an indisputable fact remains that during all this time Rwandan infiltrators as well as ex-M23 were taking positions in Tchabi, Shari, around Rwampara, in the Lipri district, in Boga, and so on. They have repeatedly attempted acts of provocation that can cause the Lendu and Hema conflict (war). Among the strategies of these enemies of peace are the frequent theft of Hema herds for alleged Lendu or Ngiti, killings of Hema subjects etc.

A most influential Hema chief, Honorable Yves Kahwa Panga Mandro, who had found the hand of the Kinshasa regime in this sad maneuver took the courage to urge his community not to be dragged into the trap of a power that has chose to extend his reign on the divide and rule strategy. For Joseph Kabila has always regarded Ituri as the most favorable ground for starting the bloodshed in the same way that he was able to organize it successfully in Beni and Kasai. But Kahwa’s call for unity and inter-community solidarity will only be understood by members of his own community, the Hema.

As for the Lendu, the enemy had them in his bag after scrutinizing their psychology: they are an emotional and always spontaneous people, always ready to act at the slightest excitement. This is why, in the current return of the war between Hema and Lendu, it is the Lendu who are more attacked than the Hema.

Benilubero Online, for the moment, reserves the right to divulge the names of the civil and military authorities currently used by the regime in place to manipulate these weak minds on the ground in order to provoke an inexhaustible stream of people in Ituri solely for the purpose of find excuses to dodge the deadline of the elections expected in December 2018.

The government even imported machetes for the massacres in Ituri

In August 2017, verified information reported the arrival and removal in the city of Bunia of a very large batch of machetes. The youth had mobilized to reassure themselves of this situation by demanding that the suspected containers be unloaded in his presence.

Authorities of the governorate of the province in Bunia, fearing the scandal in prospect, had to maneuver with FARDC soldiers based in Rwampara for the cargo to be unloaded overnight. Unable to complete this mission alone in one night, some young people were associated to work that night as laborers. Unfortunately for them, they were all secretly killed and buried after the task was accomplished, except those who, having found themselves unable to stand the weight of the « goods » to be unloaded, had quietly escaped and are now eyewitnesses who report this umpteenth crime of the state. Thus, the authorities of Bunia managed to empty the machetes of the containers and to replace them by bags of flour.

Power is eager to create new hotbeds of tension

Also in the year 2017, the secret service of President Joseph Kabila had tried in Ituri to train the Nyali at war against the Alur in the mining area of ​​Mongbwalu. Funds were given to recruit and train young Nyali in the heart of the forest in the west of Djugu territory. A training center was erected for this purpose in favor of recruits Nyali, whose staffing was ready at the Rwampara camp in Bunia. The Alur community is home to the largest population of this mining region.

The flight of this information stimulated the Alur community to mobilize all the Nilothic tribes from the Northeast of R.D.Congo to Kenya to the multitudes of Luo communities in Uganda. The Nyali, panicked by this mobilization campaign, had to decline the offer of President Kabila, which required them to wage war against the Alur.

Sources from Benilubero Online report that there are Rwandan illicit immigrants in Ituri on the slaughter or current war between Lendu and Hema. Indeed, a certain Ndagijimana Karaha, an alleged Munyabwisha from Rutshuru, who arrived in Ituri among Rwandan Hutu immigrants, and who had enlisted in Tchabi (a community of Irumu territory south of Ituri invaded by Hutu Rwandan) was killed on February 7, 2018 among the assailants who massacre the Hema.

In addition, Benilubero Online correspondents in Bunia report that ex-M23 soldiers who have been recovered and recycled by the Congolese government are currently being transported to Ituri under the uniforms of the National Police, with the aim of intervening in the zones. conflicts between the two tribes (Hema and Lendu).This is a new new formula adopted to amplify the carnage in Ituri, like what is happening in Beni and Kasai. Yet to come …