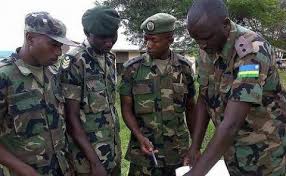 A reality hard to believe, but that is the truth. The military and security situation is confused in Kabasha, at the gate of the city of Beni. A rebellion broke out, but the fighters were elements recognized as part of the Congolese national army, the FARDC. All this happens while no mutiny has been reported in the army. What is this confusion? It is above all the fact that within the FARDC, the so-called governmental army, there are soldiers who have the task of eliminating their colleagues and working for assailants, rebels, murderers, terrorists … ‘It is not obvious to identify at first glance.

The power has therefore infiltrated its own rebels into the loyalist army. These rebels operate from inside the FARDC as well as from outside. From within, they occasionally escape from their colleagues and form bands that attack and kill other soldiers deemed authentic and patriotic. From outside the army, they have technicians who work to mentor the criminals who escaped from Beni prison while recruiting others.

Since June 20, 2017, combatants of the Mai-Mai NDC-Rénové group who occupy the south of Lubero are fired discreetly under the cover of the FARDC to Kabasha / Beni. In doing so, the FARDC themselves abandoned several positions of their deployment south of Lubero, supposedly to reinforce the front of Kabasha against the assault of unofficially identified assailants. Thus, the NDC-Rénové fighters that FARDC attaches to the secessionist ideology of Kabila have recovered, seem to have received two missions now: on the one hand, they occupied and installed a parallel administration in all the localities from which the FARDC retreated south of Lubero, including Kasugho, Bunyatenge, Bukumbirwa, the Bunyatenge – Majengo axis and their surroundings; on the other hand, they became allies of the terror forces installing the new rebellion in the Beni region.

A great plan is at the point to unleash the worst of the two reference cities of Beni-Lubero, namely the city of Beni and its neighbor of Butembo. Shall we cry this distress towards power? Maybe yes and no. Yes, as a challenge to a sadistic power and complicit of the enemy of its people in order to be caught in its trap project when international justice comes; Because in fact it is those who are supposed to protect the homeland and its people who use the means of the State to exterminate the sons and daughters of the country.