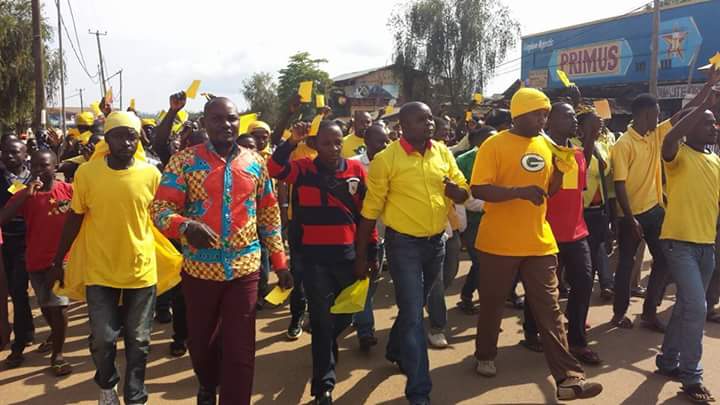 We are October 19, 2016. All Congolese cities woke up in the mood of yellow card. The streets of eastern cities of the country are overwhelmed by the influx of peaceful protesters determined to require execution of the volunteer sovereign people remains strict compliance with Article 64 of the Constitution concerning the mandate of the Chief of office of State. Moreover, as in the capital Kinshasa, streets are quite deserted, to mark the dead city, but always with the same goals in mind that December 19 is eagerly awaited, date of change in terms of alternation.

Everywhere the people said "no" to the accord of challenge of the "national monologue" which has just been concluded and renews the warning to the head of state, Joseph Kabila, and all the collaborators of his predatory regime that two successive terms recognized and allowed the president expire in 60 days.

The yellow card is a great challenge for the signatories to the agreement monologue concluded in Kinshasa yesterday, October 18, 2016 under the aegis of Edem Kodjo.

By actions taken today under the symbol of a yellow card, the Congolese people take into witness the international community for its refusal to the comical accord and misleading that Kabila and his lobby tried to force to retain power beyond 20 December. Now all those who continue to force nature will be solely responsible for all negative consequences of this agreement, which is rightly regarded as an agreement to shame those who posted their signatures, and an insult to the people and the Congolese Nation.

It would be wise that the international community draws all the necessary lessons from manifestations of this October 19, which acts to challenge the conclusion or agreement of a deceptive dialogue, and take in anticipation of provisions consequences of a red card that will inevitably take place on 19 December 2016.

"You do not keep the team that loses." Having failed miserably, Joseph Kabila needs to be replaced. This is the sovereign will of the Congolese people, like it or not!