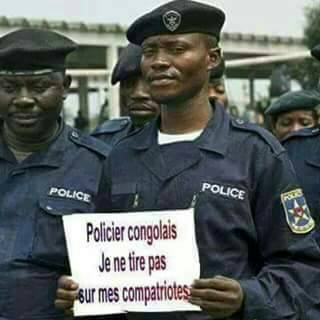 The record of the police repression on the occasion of the demonstrations of Monday, August 07, 2017 is so heavy that the official would be ashamed to let it know. Against the number of 12 deaths officially published, cross-examinations provide the truth of at least 65 deaths with innumerable wounded; these data are verifiable as follows:

It is difficult to make an inventory of the wounded, who are by far numerous, most of them in serious condition, a consequence of the fact that the Congolese police no longer act as policing agents but as agents of terror that shoots civilians with actual bullets. Investigations that are still ongoing may increase the current number, especially since the protests that have begun will continue until August 9, 2017.

When the Congolese people rise today to demand the end of a predatory regime and their bloodthirsty actions, while projecting themselves in a perspective of a better future for the Republic, many citizens taken hostage in the public services , including Administration, Army, Police, etc. pretend not to understand that the envisaged liberation awaits the contribution of each of them. All of them are similarly victims of the present bad governance and should therefore be concerned in the highest degree by the concern that makes the Congolese people swear that they will not allow themselves the slightest rest until the objectives of their fight is achieved.

The police, the army, the ANR, and all these vassal services of the regime of disarray have every interest in ceasing to work for the protection and extension of that power which has already caused too many deaths. All these services would need to be further re-educated in terms of their duties towards the Nation: perhaps they should be reminded that they do not belong to an individual or group of individual people, nor to the ruling power, but to the Congolese state whose first sovereign remains the people.