Knowing all about the Circumstances of the assassination of the chief of Isale-Bulambo ! 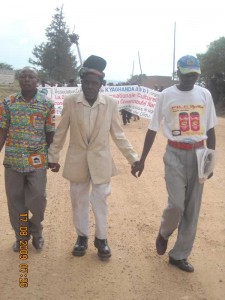 Yesterday in his article, Father Gaston Mumbere affirmed with reason that the death of the traditional chief on Monday night in Bulambo was not by chance. Referring to the comments of GADHOP (Group Associations for the Defence of Human Rights and Peace), Radiomotofm.info asserts the same and speaks of a target assassination.

It would be not surprising that his death be linked to the assassination of the president of Kyaghanda Yira asbl, Father Machozi. In fact, the evenening of his assassination, March 20, 2016, Father Machozi met, in the presence and on the invitation of Chief Kalemire, with the notabilities of Isale-Bulambo, including of course Chief Kahindo Balikwisha Azizi, in order to discuss security issues of the area. After the meeting, all the notabilities regained their homes, except Mwami PALUKU KALEMIRE III, who witnessed from his room the assassination of Father Machozi. To refresh your memory you may read https://benilubero.com/lheure-des-revelations-sur-lassassinat-du-pere-vincent-machozi-et-les-massacres-de-beni/

One could thus infer that those who are behind Father Machozi’s murder saw Azizi as an annoying witness who would be one day subpoenaed as witness to Father Machozi’s assassination. And for that, he had to die ! What astonishing it is that they were killed both two in the same manner ! Would the assassins who killed the chief be the same killers who murdered Father Machozi ?

Find here below the article by Radiomotofm.com.info

KAHINDO BALIKWISHA AZIZI has been victim of a criminal barbarism in his fief at 8 :25 PM, Tuesday, September 6, 2016 as he was touring downtown Bulambo.

Crackling of bullets was heard for few minutes. KAHINDO BALIKWISHA AZIZI, riding his motorcycle, rushes in one of acquainted place. Arriving in a mad rush, he entered straight in his acquaintance’s room. He tries to close the door behind him. Gunmen, who obviously were pursuing him, riddle several bullets in the door as the victim was trying to protect himself.

In total 24 bullets were shot in jumble in the lower part of the door, and felled the chief. These bursts crushed his left leg, thorax, chest, and other vital organs. The man died. Curiously, no bullet case was found on the scene. The bandits might have picked up all of them in order to leave no traces. This fact lets us beleive that it was a well planned operation.

The corpse was taken away from the scene to the hospital facility of Bulambo before it was returned in the chief’s family under the order of authorized instances. In the morning, the chief of Bashu chiefdom, Mwami PALUKU KALEMIRE III, arrived at the place along with local traditional chiefs of the area to sympathize with local population and PATANGULI family relatives.

Through the notability of Bashu, the population of this part of Beni Territory condemned the assassination of chief KAHINDO BALIKWISHA AZIZI. During the meeting held the afternoon of Wednesday, September 7 in Bulambo, Butembo security services representatives, who came to the scene, did the same. In Bulambo, it is hard to assume this crime and nobody dares to suspect the network of this assassination. The inhabitants of the house where chief Balikwisha Azizi was killed said didn’t see anybody during the crackling of bullets since all were overwhelmed with fear. The Civil Society of the place also condemns this assassination.

Information source on the spot indicated that, since a few time ago, Chief KAHINDO BALIKWISHA AZIZI was fearing for his security. The late had in fact conducted a parade to his office last Tuesday, September 6, 2016 in Bulambo. We heared him during his lifetime appealing his people for peace and vigilence.

The body of Chief AZIZI will be buried Thursday, September 8, 2016 in MUTENDERO ancestral sanctuary. It is worth to indicate that the victim was enthroned chief of Isale-Bulambo in October 2014.

« The new military command SOKLA 1 based at NYALEKE must do some concrete and palpable actions to protect civilians and punish the guilty.» That is the recommendation of the Group Associations for the Defence of Human Rights and Peace, GADHOP, Wednesday September 7, 2016. This recommendation relates to the assassination of the Chief of Isale-Bulambo Tuesday, September 6 night.

« It is thus understood the grave danger of any extension to the power of Joseph Kabila. Congolese worthy of the name must reject any form of transition. Indeed, given what is happening in Kivu- Ituri, any transition beyond December 2016 would allow time and resources to the Congolese government which is, obviously, an accomplice of the Rwandan occupation of Kivu- Ituri being » (Father Vincent Machozi, March 19, 2016, speech that earned his murder the next day).