“My paintings are about peace and unity, reconciliation and solidarity,” said Kambere, who is from the war-ravaged Democratic Republic of Congo. Tensions in that country have eased recently and new hopes were raised last month when the Congolese people chose their first democratically elected president since the country gained independence in 1960. The election was generally hailed as legitimate and corruption free. But the impoverished country’s struggles are far from over and Kambere plans to continue spreading his artistic message of optimism. His evocative paintings are on display in the gallery at the Worcester African Cultural Center, 33 Canterbury St., through Dec. 20.

The canvases shimmer with the vivid colors of the continent, but they are hues drawn from memory. “In my home province everything was very green, very beautiful and lush,” Kambere said. “That is the image I grew up with but now everything has been devastated by the war.” And he means everything. Not only did the fighting kill about 4 million people, according to several news organizations, but it also wiped out the trees, flowers, birds and animals, especially in the country’s restive eastern provinces, where Kambere lives. “We still have hope the country will recover and the wildlife will come back again,” he said.
The successful election is a country almost totally lacking in infrastructure was widely regarded as a remarkable thing and a cause for celebration. The European Union was so impressed that it announced earlier this week that it will double aid contributions to the country. 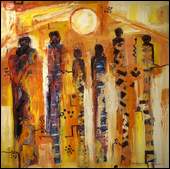 “We are all fascinated by the way it went,” Kambere said. “We didn’t expect that to happen. It’s a huge country — the whole of Europe can fit in it — and without any roads, without any trains. This was a very challenging election and it was successfully run. It is tremendous for us.”
It is a guarded optimism, however, tempered by 40 years of instability and bloodshed. The most recent fighting was between government troops and rebels in the eastern provinces. Combatants included soldiers from bordering Rwanda and Uganda who set up camp in the Congo for their own reasons. Rwandans claimed they were chasing fleeing partisans who had killed people inside their country while the Ugandans said they were after Congolese who were fostering rebellion in their country. Neither Kambere nor Pierre Mathe, a Congolese countryman who accompanied him at the African Cultural Center gallery Tuesday, buy those arguments.
“The official reason was not their real purpose,” Mathe said. “They ended up looting on a daily basis and killing and raping. They didn’t even move far into the country. They just settled (near the border.)”
The invaders found Congolese sympathizers, but there were few of them. “They were a minority but powerful because they had weapons,” Kambere said. “The local citizens they didn’t have weapons and they didn’t have the notion to kill. The regular citizens wanted peace and reconciliation.”
Kambere and Mathe are concerned that, now that the fighting has eased, business as usual will mean what it always has been — a cause for corruption. Before the war “we had a dictator who didn’t do much,” Kambere said. “He didn’t develop the country. It was just awful, the hunger and everything.”
“The people in power now are the same ones who have been running the country and they never showed any evidence of conscience or the proper way of managing the country,” Mathe said. “Corruption is a huge, huge challenge.” The recent election, however, sends a new signal. “After 40 years if instability and dictatorship and 10 years of war and very, very tragic situations this is a sign of hope,” he said.
Through all the chaos, Kambere has championed peace with his paintings. One canvas, done in an energetic, abstract style, shows a luminous circle high in the sky — the sun, perhaps, or a symbol of a new day. “In the sky there is an opening, like a window” Kambere said. “With real determination we can go and reach that window of hope through which we can survive.” His paintings have been shown in Germany, Belgium, France, Italy, the Netherlands, Uganda and other countries. Many of the exhibitions were at the invitation on international human rights organizations. “The elections are over,” he said. “Now I am fighting for total reconciliation, the total recovery of peace and then the development and reconstruction of the devastated country.”
But not all of his artwork is political. One piece shows a head-and-shoulders human silhouette shape in deep brown with a mirror image in bright white. “I was thinking about a self-portrait,” he said, “And instead of having the light behind me I have the light in front of me so it guides me.”
“Reflection and Refraction,” an exhibition of works by Rebecca Leonard, will be on view through Dec. 30 at the Booklovers’ Gourmet, 55 East Main St., Webster. An artist reception will be held there from 1 to 4 p.m. Sunday. The show includes acrylic paintings as well as a collection of enhanced photography of Webster Lake, the Blackstone River and surrounding ponds. More information on the artist is available at www.thirdeyeimage.com. Also, a raffle will be held through Dec. 17, with a finished 18-inch by 18-inch print as the grand prize. Raffle proceeds benefit the Webster-Dudley Food Share
Transmis a Beni-Lubero Online par l’artiste Daniel Kambere
( 12 Decembre 2006)

Attack and escape in full day at the prison of Beni: the accomplices of the criminals are known!