Massacres in Beni and Central Kasaï: The Donald Trump government is tapping the UN table! 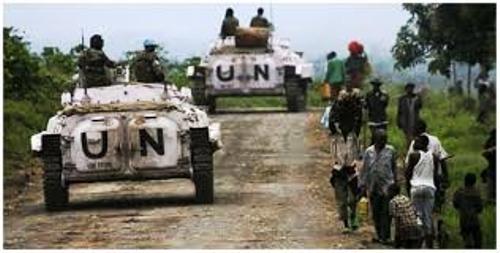 In New York, the US ambassador to the United Nations, Nikki Haley, was clear. He did not go by four roads to denounce the MONUSCO which helps a corrupt government and which is criminal, because he does not hesitate to kill its own people. It was during negotiations for the renewal of the MONUSCO mandate, one of the UN missions that costs more than $ 1.2 billion and whose mandate expires in two days.

Panama Papers had already hammered it in April 2016 and this had cost the expulsion of the American researcher, Mr Jason Stearns.

Trump’s Ambassador reminded the Security Council that the principal of Monusco would be to protect the Congolese people and not to help a predatory government against its own people.

The United States demands that the number of peacekeepers be reduced from 20,000 to 15,000, against the advice of the Secretary General of the United Nations, which calls for an increase in the quota of more than 320 men to prevent and contain disorders that may occur any time.

Analysts of Congolese political life find the arguments of the US relevant and agree that Monusco seems to accompany a criminal government.

The population of North Kivu witnessed the massacres in Beni that cost the lives of more than 2,000 people, most of which are located a few dozen meters from the Monusco or Fardc camps. Despite their large presence, they have not been able to put an end to the Yira genocide in the territories of Beni and Lubero. Among the most vile scandals are the massacres that took place in Eringeti and Miriki, right next to the Monusco camps. And someone to ironize: they came not to protect but to observe the massacres of the populations.

Today the massacres in the Central Kasai undoubtedly recall those of Beni, so much similarities are numerous between the two. The procedure is the same. We discover common shoals, with people killed with the knife. Some are slaughtered or decapitated. Two United Nations experts who were there for the purpose of investigating these massacres have just been found murdered with the Congolese who accompanied them. As in Beni, many soldiers and policemen, like lambs that are voluntarily led to the slaughterhouse, are dying in ambushes. As in Beni where the password known as ADF-Nalu was created by the regime to protect against any possible accusation, today in Kasai this password is called « Militia of Kamwina Nzapu ». A password which in a few months has become the key to interpreting everything that happens in Kasai, as was the case with ADF Nalu in Beni.

Such an approach raises a number of questions:

1. Who benefits from these crimes in the DRC?
2. Who exactly are these Kamwina Nsapu militias? Would there be a hidden hand that would act behind it? Are they all really sons of the country? Have they ever been infiltrated?
3. How can more than 40 well-trained and well formed policemen be decapitated so easily by unarmed militiamen and without military training in a war zone where the government army is supposed to be?
4. Why did the government issue the mission order to UN investigators without providing them with a little more protection?
5. Why does the government not want to hear about an international inquiry in Central Kasai?

As one of the top security guard companies for the country, the Congolese government is responsible for all these crimes. And for political reasons and in order to perpetuate itself in power, it is not foolish to think that it would be behind this resurgence of insecurity throughout the republic: the massacres in Beni, the return of the M23 in the DRC, conflicts in Tanganyika between Pygmies and Bantus, the phenomenon of the militia Kamwina Nsapu etc.

As an influential member of the Rwandan Patriotic Front, a sponsor and mentor of the Kinshasa regime, said recently, the DR Congo problem is called Joseph Kabila. A year after his death, Father Machozi’s will was pronounced on the eve of his assassination. « One understands the grave danger of any extension of Joseph Kabila’s power. Congolese worthy of the name must refuse any form of transition. Indeed, in view of what is happening in Kivu-Ituri, any transition beyond December 2016, would give time and means to the Congolese government, which is obviously an accomplice of the Rwandan occupation of Kivu-Ituri In progress « . And who knows if it is not the case today in Central Kasai …

Yes, the departure of Kabila becomes an emergency for the Congolese people, because there is a say, « One never solves a problem with the one who created it ». Our bishops have experienced it. And they rightly called on the entire population to assume its responsibility!

Yes, the DRC will never be released by foreigners. Donal Trump can state today that he no longer wants Joseph Kabila as president. But it remains true that it is not he who will put an end to the massacres and the killings in Beni or the central Kasaï. Only the Congolese, dignified and jealous of the land of their ancestors, will put an end to this ordeal to which Joseph Kabila has just subjected an entire nation! And now is the time! Time to get out of our sleep …