Massacres of Beni: The Yira community (Nande) proves to the UN Security Council that Kinshasa is an accomplice and the Monusco incapable … We need an international investigation and a special tribunal!

MEMORANDUM OF THE COMMUNITY YIRA (NANDE) TO THE DELEGATION OF THE UNITED NATIONS COMMITTEE ON THE POLITICAL AND SECURITY CRISIS IN THE DRC, RESPONSIBILITIES AND TRACKS OF SOLUTIONS

Your Excellencies, Ladies and Gentlemen 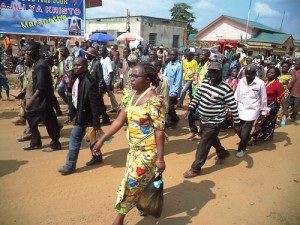 With the expression of our feelings of gratitude,

The Cultural Association Kyaghanda asbl “Obughuma bw’aba Yira”, through the Cultural Council, which represents the Yira Community (Nande), sits in its name and commits it, has the real pleasure to welcome you on the ground of its ancestors and thank you for having especially inscribed the bruised land on your agenda notwithstanding your many occupations. This is a mark of compassion that comforts us.

Indeed, as you learn every day, it is for more than two years that our environment (Beni-Lubero) is subjected to cruel acts of genocidal nature and to clearly targeted extermination of the Yira community (Nande ) and occupation of our land.

These massacres of indescribable cruelty characterized by the slaughter of civilians, disembowelling, inoculation of metallic or wooden objects in the female genital organs, decapitation, the knocking of children against trees, shootings, house fires, vehicles, looting, … using manchette,hatchet, ax, saw, hammer, gun, … have caused our community to lose more than 1,300 innocent victims (see the full report of the Kyaghanda Beni in annex) and more than 1,000 people missing.

The Cultural Association Kyaghanda asbl “Obughuma bw’aba Yira” considers these massacres a conspiracy skilfully organized against the Community and expresses its affliction because:

1. According to the usages and customs of yira, the blood of the innocent, poured upon our land, brings great curse to the great misfortune of the occupants;

2. The people who are supposed to protect the population and its property (national authorities and the MONUSCO intervention brigade) have allowed the assailants to operate quietly in spite of the mandate and the enormous resources at their disposal;

3. The very high number of victims, the duration of this dirty work, the diversion of the various authorities (national and international) as to the identity of the authors testify to their complicity in the commission of these massacres;

4. The populations forced by the government to abandon their villages and fields on the grounds of offensive operations are unfortunately abandoned to their sad fate in the large agglomerations (Beni, Butembo, Oicha, …) without any humanitarian assistance. They are thus exposed to diseases (malnutrition), abandonment of classes by their children and many other ills. One would even say another silent strategy of massacres;

5. All those who attempt to vehemently oppose or denounce these acts of genocide have simply been silenced (killed with the same terrorist methods); The government being the first suspect for not having identified and tried the perpetrators. We quote General Lucien BAUMA AMBAMBA, Colonel Mamadou NDALA, Father Vincent MACHOZI KARUNZU, then World President of the Kyaghanda Yira Cultural Association (Nande).

On the basis of the above, the Kyaghanda Cultural Association requires:

1. The UN’s characterization of these massacres as genocide against the Yira community (Nande)

2. Clarifying the identity of the perpetrators and their accomplices through a neutral and independent international investigation. In our view, this investigation should be regarded as the first suspects: the Governments of Rwanda, Uganda and certain officials of the Kinshasa regime (officials and military officers) as cited in several United Nations reports and international NGOs of Human Rights with a strong suspicion of complicity of certain agents and soldiers of MONUSCO;

3. The opening of a special criminal court for the massacres in Beni-Lubero to objectively judge criminals and accomplices, to compensate the victims in particular and the Yira community (Nande) in general.

In addition, the Cultural Association Kyaghanda expects all violators to agree in the DRC regarding the end of the mandate of President Joseph KABILA, the organization of peaceful and credible elections, democratic alternation in strict compliance with the Constitution.

In front of a government that has totally failed to secure its people, if not even delivering it to predators; The Cultural Association Kyaghanda rejects any attempt by the latter to want to make any slip in order to grant a new mandate to the current regime in violation of the popular will expressed in the Constitution.

To this end, the Cultural Association Kyaghanda Yira (Nande) supports the approach of the CENCO and the International Community calling for the real dialogue between the new majority resulting from the Conclave of the African Union City, the Rally of the Parties of the Opposition and genuine civil society in order to reach a consensus on the electoral calendar respecting the Constitution.

The original document as a Microsoft Word file:
sg_memorandum-de-la-communaute-yira