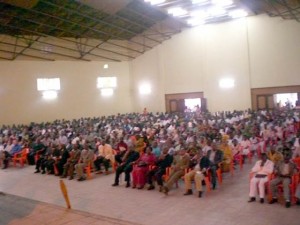 Our sincere condolences to families who have been plunged into mourning with the acts of genocide which the Yira Community suffers for nearly two years, and our compassion to everyone who has been directly or indirectly affected in one way or another by this situation.

The events subsequent to the genocide inflicted to the Yira Community have exacerbated the situation. From this fact, we are great worried is over the lack of appropriate care for the mass population by competent authorities, whether civil or military, especially in this crucial period. This attitude has progressively given lee way to the chaos that Beni-Lubero Online has often warned opinions about.

Such is the situation that has unfortunately degenerated these last days in the craze of popular justice in towns, cities, and villages, after the massacre of more than 127 people at Rwangoma last August 13.

We would like to make a pathetic appeal to any Muyira to ban and stop immediately any act of threat to human life and to abstain from any behavior that would nurture hatred, in order to avoid falling into negative social values which are not accepted by none of us.

In fact, despite the burden of the situation, the Muyira should not lose sight of his distinctive traits that characterize his culture, notably the spirit of nonviolence and hospitality. The lure of involvement in violence is the most dangerous trap in which the enemy of the Yira Community has always dreamed of dragging it. In honor of our cultural identity we will not concede to this.

On the contrary, in respect of the principles of public order and human dignity each member of the community will continue to be vigilant in order to spot, track down, and denounce those intruders who are attempting to come and establish a regime of terror on the land of our ancestors, and then alert the special services that have to deal with them.

Thanking the Yira Community for letting themselves be guided by wisdom so far, we exhort each member to preserve the spirit of unity inside the community and of solidarity with any human being of good will.

These events we are witnessing today are the fruit of impunity which characterizes the greedy institutions of the Republic and nurture the genocide that is underway in the Beni-Lubero area.

To finish with this, we appeal once more for the following: