MIGRATION OF THE RWANDAN HUTUS TOWARD ITURI: Piercing the depths, beyond the visible part of the Iceberg 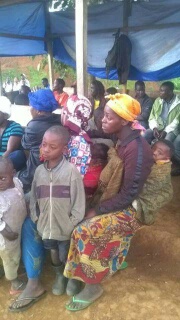 Nature has a horror of emptiness, they say. But there must be order to fill the void left by nature. History and geography indicate that Rwanda, a country bordering the Democratic Republic of Congo, is experiencing serious demographic difficulties. Indeed, Rwanda, a small country of 26333 km ² with a population estimated at around 12 million inhabitants is counted among the first countries with higher density in the world. This situation has been the basis of the incalculable consequences throughout history in this country. The quarrels over the occupation of vital spaces occurred recurrently between the Hutu and Tutsi people, one a farmer-state and the other a pastor. The adventures of the history enamelled by the cyclical genocides says more.

Unfortunately, the great Congo, which found itself a direct neighbor of Rwanda through the magic of history, is considered by some Western and African to be the outlet for this Rwandan overflow. Since colonial times, several migratory movements had been observed. We saw the territory of Masisi populated by the Hutus under the blessing of the colonial authority.

However, the arrival of these migrants, while solving the problem upstream, creates others downstream. Congolese populations in immigrant-receiving areas pay a heavy price. Indeed, the poor management of the operations of transfer of the populations always ends up creating a certain negative reaction towards the population supposed to welcome the newcomers. Conflicts brake out between indigenous peoples and immigrants, especially when the latter claim ownership of land.

The most recent case concerns the massive and clandestine movement of the Hutu population from Rwanda to Ituri. These immigrants claim to come from Masisi and Rutshuru when this is not the case. So far no echo has filtered villages from both the Rutshuru and Masisi territories in relation to the massive displacement of the Congolese Hutu populations in the two territories in search of arable land in the province of Ituri. The reliable information received is because of the nocturnal crossings of the Hutu populations of Rwanda according to the following itinerary: « Rwanda-Isle of Idjwi-Kalehe-Masisi-Ituri via Beni ».

According to these same sources, these movements would be the implementation of a plan skilfully mounted, refined and financed in Rwanda. On the other hand, on the Congolese side, no effort is made to enlighten national opinion. For any informed observer, some questions deserve answers:

– Why are these movements of Hutu populations in Rwanda initiated during a period characterized by insecurity in the reception sites (Walendu-Bindi community in Irumu territory) and the surrounding areas (Batandi-Mbau community in Territory of Beni)?

– How do these people manage to obtain Congolese identity cards when they are Rwandan subjects?

– Why do they agree to live in an insecure region?
– Why do they learn the kinande when they arrive in Ituri?


– Is there not a link between the massacre in Beni territory and the presence of these immigrants in the region?
These are all questions that deserve to be analyzed by anyone who feels concerned by these movements of Rwandan Hutu populations towards the province of Ituri.

In the light of the above concerns, it would be immediately necessary to associate the massacres of Beni with the presence of these immigrants in the area, especially since the testimonies of some survivors indicate that their executioners would express themselves in Kinyarwanda. The Congolese voter cards they get from Rwanda allow them to pretend to be Congolese when they are not. Their mode of operation and method of execution of their victims are exactly  » made in Rwanda  » contrary to the ADF / NALU who executed their hostages by bullets; It is enough to remember how they had slaughtered the Tutsis in 1994, recently the Miriki massacre is a patent example. They immigrate with women and children, all sexes confused and curiously, in the bush where the dirty work is perpetrated one notices the presence of men accompanied by women and children, which was the case with the real ADF / NALU .

The repeated massacres of the people of Beni are only a war of attrition against the population of Nande in order to fatigue it and discourage so it can abandon its arable land. To prove that there is a population that is targeted, it is enough to ask oneself why these occult massacreers do not cross the limits (within 2 km) from the province of North Kivu with the Ituri to operate on the other side of the province boundary.

On the other hand, by deeply reflecting, it will be understood that these people would learn Kinande to create a sort of diversion in the relations between the Iturians and the Nande in order to poison these relations. The strategy would be to tackle the interests of the Iturians by speaking Kinande to bring the responsibility to the nande, knowing that in Ituri any national of North Kivu is taken for a Nande. To illustrate these facts, it should be remembered that on the night of January 28 to 29, 2016, cow thieves speaking a false kinande mix of « Rwandanized » kiswahili stole a large number of cows from the farms belonging to the Hema after killing a Hema herdsman. Fortunately the thieves had been apprehended and identified as Rwandan Hutu immigrants tinkering with a ripped kinande. Had it not been for this rapid apprehension, the responsibility for the theft of the cattle would have fallen on the Nande. One can imagine the consequences.

In our opinion, the authorities responsible for internal affairs and security at their national and provincial level should, within a short period of time, put a double check on the situation and have all possible information on the movements of the Rwandan population towards the Republic Democratic Republic of the Congo. The fact that the voter cards that take the place of the Congolese identity cards are issued to the Rwandan is worrying any Congolese in love with patriotic good sense, especially for the populations of North, South Kivu and Ituri whose lands are so coveted by the Rwandans in search of vital spaces.

Recently, it was astonishing to learn that the Burundian rebels trained by Rwanda for the conquest of power in their country were arrested in Uvira with the Congolese identity cards issued in Rwanda.

The populations of the North, South Kivu and Ituri will also have to internalize the fact that the land is never sold to foreigners. Much of the land in the Masisi territory is no longer managed by the Aboriginal customary authority because it has been sold to individuals who establish livestock pastures there. The Palestinians had ended up losing their country after gradually and legally selling all their land emptied of men to the Israelis of the diaspora. Today they are stateless. For the record, the first Kibbutzs, Mochavs ovdin, ancestors of the State of Israel, had seen day from the land sold by the Arabs to the Jews of the diaspora financed by the Rothschild under conditions mortgaging the future Arabs in the area. The results are known to everyone.

For the Hutu populations of Rwanda, candidates for immigration, should know that the legendary hospitality of the Congolese people is no longer to be demonstrated. Of course, the Democratic Republic of the Congo is full of vast expanses of empty land whose development is necessary for its development. Even if nature has the horror of a vacuum, filling mechanisms must be planned and ordered in order to avoid disastrous situations for both immigrant populations and indigenous people.

The best way to settle in DR Congo is to go through officially recognized legal channels instead of exposing their lives in danger trying to borrow obscure means of infiltration.