Moving letter from a peasant of Beni to Madam the Prosecutor of the International Criminal Court of Justice (ICC)! 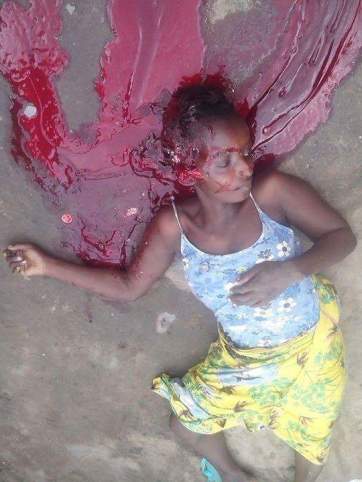 OPEN LETTER TO MADAME THE PROSECUTOR OF THE INTERNATIONAL CRIMINAL COURT

I am a farmer in the Democratic Republic of Congo. I studied at Lovanium and I worked a long time as an agent of the state. Today, I live in North Kivu, in the Beni territory, municipality of Rwenzori. Actually, I have become a nomad. Because in the last two years, I’ve moved house four times.

Prior to October 2014, I was living in Eringeti where I had settled after retirement to the land of my ancestors. I cultivated cocoa, cassava, beans and all was great. Until that night of October 17, 2014 when armed men raided our area! In one night, I saw my friends, my wife and one of my workers slaughtered, disemboweled, mutilated, etc. I escaped the assassins because that day I went to visit my daughter in Mavivi who had just given birth to her third daughter. Morning and evening, I was going crazy counting the graves of my friends and those close to me. I was so inconsolable that I wanted to kill myself! Many farmers abandoned the site. Some headed to the Upper Zaire (known as the Eastern Province today) and others to Beni and Butembo. I loved my wife so much for me to abandon her at the site was like a betrayal.

After a month of mourning, my daughter convinced me to join her at Mavivi. Otherwise, she would divorce from her husband to come and live with me! I resigned and I went to live in Mavivi, 200 meters away from my daughter’s. But the killings were only intensifying in all the territory of Beni. I will never forget the date of 20 November 2014. This was after the passing of President Joseph Kabila, I think. Weird! More than 120 people were killed. After a few months, we decided to leave Mavivi to live in the outskirts of the town of Beni in Rwangoma where my son’s family lived. Imagine, we left there on 08 May 2015. And 11 May 2015, they came in the neighborhood where I lived to kill. More than 11 people were slaughtered. Worse, they murdered them, it seems, after they were welcomed and were well fed by the victims. Most of these cutthroats, according to survivors, were wearing the uniforms of our soldiers but spoke Kinyarwanda, Lingala and Swahili with an accent that is not from here. What would have happened if we had not left?

Of course I do not write you from Rwangoma that we had to abandon in cascade the evening of August 13 . In the morning, my daughter, my son and my son’s eldest son, 8 years old, went to the field to look for food. I stayed at home with the last two, ages 5 and 2 years respectively. Around 16:00, we saw people running everywhere, screaming and announcing that the murderers were coming from Nyaleke killing anyone they found in their path. The neighbor came and asked me to run right away with the children. I took the youngest and put him on the back and his big brother on the shoulders. Madam Prosecutor, try to imagine a 68 year old running around on about 4 km, with a child on the back and another on the shoulders, in the region where the terrain is painted by mountains and valleys. Despite the consolation with which we were received by a family friend, the night was long! Very long ! The kids kept asking where was their mother, father and older brother. I had even to cry when around 2:00 am, the boy woke me up and asked if his dad would have met the murderers … In this city, I have only tears for food!

Around 5:00 am, the Muungano radio, if I remember correctly, began to spread word that there were many dead and the bodies were being taken to the general hospital of Beni. At 9:00 am, I wanted to return to Rwangoma to see if my loved ones had returned. On the road, a neighbor told me that the village was deserted and invited me to go to the hospital instead . The worst I felt all night was not a feeling but a reality. Stupor! It took us only 20 minutes to find the body of my daughter and my son mutilated with a slotted head! However, to date we have still not found the body of my grand-son. Increasingly, some say, and others confirm that many bodies of the victims, including children, were thrown into the river Semuliki, what we call in our African traditions « human sacrifice to the spirits. » I understand why our military did not intervene when farmers warned them of the arrival of these cutthroats. All this has happened yet again, after passing of President Joseph Kabila. Amazing! I understand mine, like other victims of my community are the sacrifice wanted for « spirits » of the regime …

Oh, my God, I do not know why I’m writing all this. Ah yes, I remember.

Yes, Madam Prosecutor, understand my emotions. I have only tears for food! I became a walking corpse from the morning of August 14. And increasingly, I lose consciousness, especially when I see or perceive men dressed in military or police outfit.

Your words made me blush with rage!

If I write you today, it’s a result of your words that I heard yesterday on the radio of MONUSCO, I quote: My Office investigate in the Democratic Republic of Congo since 2004 and our work continues. I will not hesitate to act if the acts constituting crimes within the jurisdiction of the Court are committed and to take all necessary steps to prosecute those responsible in accordance with the principle of complementarity.

These words made me cry with joy! Because I had the feeling that at last our cry was heard and finally the ICC which you are the head would launch an international investigation that we demanded a long time ago. But as I listened to the news, I realized that you were just referring to Kinshasa events of September 19 and in which more than 100 people were killed and many infrastructure burned or destroyed. All of a sudden, my joy turned into anger. Looks like I became enraged. I went out and I started to pace in the courtyard. I was talking to myself. The words could not come out. I whispered. The neighbors saw me and came to see what was wrong. After stuttering (although I do not stutter) I could scream out loud: also we should take machetes! I started to sweat and shake. My neighbors calmed me and made me sit.

Madam Prosecutor, tell me, what are the acts of crime within the jurisdiction of your court? My Office investigate, are you saying, the Democratic Republic of Congo since 2004 and our work continues. This office does it inform you of what we live here since 2014? Did it not inform you yet that today, there is a genocide that is currently rampant here? More than 1,800 people irrespective of age and sex and whose only sin is to belong to the Nande ethnic group were deliberately killed with knives, slaughtered, gutted, burned alive etc. Schools, hospitals, dispensaries, homes were either destroyed or burned. Over 200,000 families have been driven from their land and fields and are confined to the city where there is no infrastructure of reception. And God only knows what will happen tomorrow. Because the murderers have belted large cities, or even reducing thus occupying the living space of the population. Some even say they are already infiltrated in the city and it is difficult to distinguish them from our military. Yes, God only knows where I’ll be tomorrow, with these two orphans.

Tell us, Madam Prosecutor, what is lacking for this tragedy to be in the acts constituting crimes under the jurisdiction of the Court? Will we also have to take to the streets, as our brothers and sisters in Kinshasa, go into our fields, also begin to hunt the slayers and slay them if we catch them? Yes, Madam Prosecutor, we are able to avenge our people and respond to the sword by the sword! Is this what you expect to make you feel moved in your mother’s womb and in order to intervene?

Madam the Prosecutor, my anger is that of a population that has lost all hope and confidence in its leaders. Like me, most have been driven from their fields and are now living as nomad! And they tell me we are at the beginning of a movement of invasion that has only just begun. Like me, there are thousands of people who have seen their wives, husbands, children, siblings, killed, slaughtered, gutted …! Like me, they fell into a depression. Like me, their heart burns with rage …!

PS: My neighbors called me crazy when I read them my letter and told of my intention to see you in person. It seems that the ticket to get to you cost an arm and a leg. If that is the case, then I understand why the cry of the poor is never heard. A young student went to greet me as we chatted. He assures me that he will help me and he will send it to you. By grace Madam the Prosecutor, please acknowledge receipt through the MONUSCO radio. I never sleep without listening to it, though I must admit it does not always tell the truth.