New carnage in Beni. The veil is lifted: The enemy is inside the army! 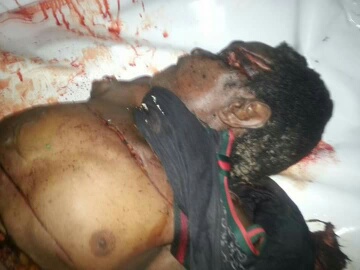 This night, our correspondent alerted us about an incursion of killers in the city of Beni in the Commune of Rwenzori at Buili and Kasinga!

What a horror in the morning!

Early in the morning, people went there to find out what is happening. At the entrance of Kasinga, we find houses burned. The bodies of seven victims were found dead; they are: Katuba, Mr Mbiyombiyo Ms. Mbiyombiyo, Kasaki Ms Pako, Pako, Mr Bifalo. Closer to the area, plus they face the military that prohibit access to the area. The official reason is that the ADF are still in the area and we proceeded to sweep the area. Meanwhile, a helicopter took off from the area without being the sighting of land! Which raises questions and comments of any kind…

MONUSCO helicopters flying over the area before the massacres

To believe the population, before the massacres, MONUSCO helicopters flew over the Kasinga area where there are two FARDC camps. Some even claim that they have seen them land and take off. Remember, Kasinga is not far from the hotel Okapi Palace of Julien Paluku and the construction site of Sinohydro.

A military, witness of the attack, testifies!

A commander present in the area during the attack just joined Benilubero to recount the indignation of the military. Indeed, he reports, soldiers serving in the area carried out a patrol in the surrounding fields of the population with a circumference of at least 5 km2. The situation was quiet. And until the evening, after returning to the camps, the situation was calm and no military authorities in that area was not aware of any reports. Around 19:00, they see an officer recently assigned new units in the area Sokola 1 under Fall Kabwe arrive and announce their take over. A few minutes later, after some had left and others entered the camp, we see a flame in the sky like a rocket and exploding like a bomb in the area of take-over. Our commander says it was a grenade that only the army possesses. Seeing this, they decide to return to camp to see what was happening and if necessary to lend a hand to their comrades that they had to leave in the camp. To their surprise, they prevent them from returning, with the reason that they have already been identified and they can not intervene. This cordon and setting fire to the houses continued until 12:00.

The population fled in panic in all directions! It does not know what direction to take. Because as it fled, it saw soldiers cordon off the area, begin to burn the houses and the military camp and kill those they find in their path. The city center is alerted. We hear crackling bullets. Social networks announce the incursion of cutthroats! MONUSCO helicopters continue to fly over the area. Yes, it is total confusion! 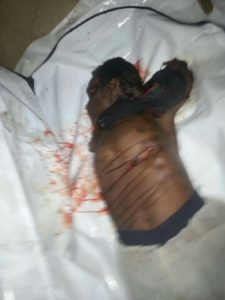 The anger of the population against the army and MONUSCO!

For the population, the army is complicit. They prevent access to the area to cover up evidence of their involvement in the genocide of the people Yira, alter information and divert the attention of the population. The population is convinced that there were many dead as well in the ranks of FARDC patriots and civilians. And hence the time of combing is to pick up the bodies to go throw them into a river as was the case during the massacres of Rwangoma or to bury them somewhere in a mass grave. Some even say MONUSCO is currently offering its services for this dirty job. The chorus is known in advance: « it is the ADF who perpetrated the massacres! They are hidden among the population. We call on the population to collaborate with the army and MONUSCO.  » But the public is not fooled! Whoever he is, on one, even a child of primary school, can not understand how the enemy could enter the city while the city is surrounded by heavily armed and strengthened military! It saw the murderers. They were dressed in new attire of Congolese soldiers, a few minutes during succession … The cutthroats are both in town as well as in the field.

As always, these so-called administrative and military authorities find energy and strategies to prevent the population from going to the place of tragedy to see the damage, which are definitely heavier. Not only do they not intervene in favor of the population, if not more than they prevent them to take care of its dead.
Enough is enough ! To show their anger, students from primary school fill the streets. Instead of going to fight against the enemy; Police set to attack the children without arms or knives! What a crime to throw tear gas at a crowd of students who have only their voices as weapons of law!

The anger of the military fronts: genocide is the work of the army made in Kabila! 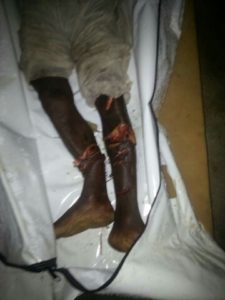 As the population makes it apparent it is fed up, the army gives its version of events: « The attackers wanted to attack the town of Beni but were prevented by the FARDC, reports the spokesman of the army Mak Hazukay !
False, retorts our commander and witness to the arrival of the military in this area, very furious! For military records, there is no doubt: the enemy is within the army! The army is indeed infiltrated. And this infiltration has intensified with the split of the operating area Sokola 1 firstly, and, secondly, by the arrival of new units commanded by General Fall Sikabwe and the passage of the General Police Commissioner, Mr Bisengimana!
The commander confirmed even what the population suspected: Consider the number of burned houses and how the area was cordoned off so no one leaves and enters, the toll is heavy. I am not exaggerating if I say over a hundred. The closure was used to collect the bodies and bury them in mass graves, deep in the bush, and thus erase the horror of this genocide! There is treason. We must act, insists the military on the phone!
The attitude of Mr. Nyonyi Bwanakawa, the Mayor of the town of Beni, who issues orders to prevent the population to go collect their dead on the killing field, only confirms the complicity of leaders. The testimony of FARDC military is clear: the extermination of civilians was the work of the State; therefore the access of unwanted witnesses was prevented at Kasinga and Buili.

The context in which involved massacres discussed here is best understood when one looks back on Preventive warnings Benilubero Online never ceased to issue opinions to alert in recent weeks.

Therefore, it is clear that, for one week, the murderers have become stronger and more armed than they were a few days ago. They are able to penetrate the military ranks without the latter being able to distinguish themselves and destroy the FARDC camps without them being able to stop them. Military patriots and populations have all become targets of murderers, we wrote in our edition of Monday, September 20.

This comes almost a month after the split of the operational area Sokola 1 in two areas. For the record, Benilubero denounced the split and had alerted the national and international opinion on the hidden reasons for this decision by Kabila. Straightforward, Benilubero had seen in the appointment of Fall Sikabwe one of the last cards of Joseph Kabila to assert its power of death and life in the Great-North.

It is therefore not surprising that the events we are witnessing in recent days take place in the operational area south Sokola 1 which Fall Sikabwe is the mentor! The events as reported by witnesses on site are revealing and show that the slaughterer is in the Army!

Signs that do not lie!

What happens in Beni is understood in light of the massacres of the population in Kinshasa!
As in the aftermath of the defeat of the M23, which was followed by the intensification of the massacres in Beni, these massacres of Kasinga are to be read in light of what is happening in Kinshasa.
While the M23, sponsored by Joseph Kabila and the Kigali regime, they created another drop zone in the far north and are fabricated ADF-Nalu, under the responsibility of a certain Mundos! You know the rest! Every person who discovered this game signed his death certificate: Colonel Mamadou Ndala, General Bahuma, Father Vincent Machozi etc. It’s the same game we are witnessing. Joseph Kabila is being defeated in Kinshasa. Today Beni-Ituri serves as a fallback zone, if not justifying the measures he will put in the hours or days ahead. We’re here in the first act of his strategy, of which one of the leading actors is General Fall Sikabwe!

The MONUSCO should break its silence!

All these acts take place in full sight of MONUSCO! If they are not complicit; they know at least something. By hiding the truth, they will eventually become responsible for this genocide. And besides, that’s where Joseph Kabila wants to take them. Last weekend he pushed MONUSCO to drop bombs on the FARDC in the area Sokola 1 North in Eringeti. This night before the carnage in the name of collaboration, MONUSCO helicopters flew over the area Kasinga. And this morning, the population saw one without seeing it land! As a Kongo proverb says, they convent rotten eggs and their fruits will soon emerge.