NORTH-KIVU: Certain elements of the FARDC loyalist army involved in killings and ambushes in Beni Territory. 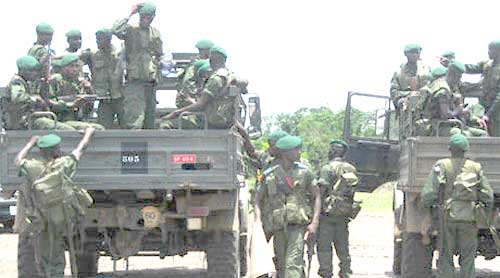 According to some information in our possession, some FARDC elements would also be involved in one way or another in the deplorable security situation in the Beni region. As the reports of the experts of the United Nations indicate, that of the Study Group on Congo (GEC) and those of the other independent organizations except the Adf and the other armed groups accused of being responsible for the massacres of the civil population , some FARDC elements would also be involved. This hypothesis continues to be confirmed until now. Information on some cases of killings, ambushes and looting attributed to the FARDC elements reaches us regularly. The most recent case is the ambush on the Samboko-Maymoya road section, Bambuba-Kisiki group, Beni-Mbau sector, Beni territory in North Kivu province.

The event took place on Thursday, October 25, 2018, on the Maimoya-Samboko section. A Mayi-moya biker whose name we are named for his safety was at their parking lot in Mayi-Moya center when he saw two soldiers of the FARDC regular army of the 322nd Brigade of « Kwata Brutale » who came to solicit his service saying they wanted to go to Samboko. On the road just 5km from May-Moya, precisely in Mulobya the two passengers stopped the bike and asked the Taximan to return by warning him that if he ever went back to the event, he would risk his life and that they knew him very well.

After the return of the biker, these thugs began to operate by shooting a MAZDA brand vehicle from Beni-Ville for the Samboko market. These narrowly escaped. They continued firing on the three motorcycles that followed the vehicle until killing a person on behalf of Kasereka Muhara who died on the spot.

According to the monitoring of the human rights organization CRDH that was contacted by the survivors of this incident, the perpetrators of this crime would indeed be the two FARDC soldiers dressed in military fatigues with weapons AK47 respondents on behalf of AMANI and BARAKA, both members of the Mayi-moya OPS escort under the command of Colonel AMULI.

After the package, the unit of these brutal kwata went to the scene and retrieved the body of the victim killed in their Jeep for Samboko. For this service, the Captain answering the name of KAVIGO Whale claims an amount of 40.000FC and the colonel of this unit blocked the motorcycle of the victim fell under the bullets until today one does not know for what reason.

The CRDH regrets to note that among the executioners who maliciously kill people in the Beni region, there are also those who are supposed to ensure the protection of the population and its property.

When it is the one who is in charge of protecting the population that kills:

When it is the one who is in charge of securing the population and its property that plunges into acts that insecure the latter, what can we say? We are here facing a state crime. A state crime that normally should be punished. The tragedy in our country is that it is those who have to do justice who are the real criminals and the culprits. We can no longer continue to give the bonus to crimes as a means of conquering power in our country;

We can no longer continue to give the crime bonus as a means of illegally remaining in power in our country:

We can not continue this way because a power based on the blood of the innocent must be dissolved by the primary sovereigns in order to better their lives.

In conclusion, the CRDH is warning both FARDC elements who have become bandits to ambush the Mayi-Moya Samboko section. If something bad happens to the witnesses and victims of this criminal incident, they will be held responsible. We are already aware of the intimidations and threats they are making against certain witnesses and victims. The CRDH also asks the UNJHRO Office of Mavivi and political and administrative authorities of Beni-Territoire to protect these victims and witnesses.