North-Kivu: Maneuvers to deprive multitudes of people of enlistment 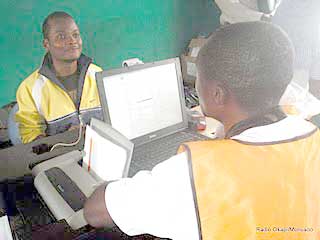 There are many warnings that the electoral enlistment operation is blocked at several CENI centers in several parts of Beni-Lubero, or in other settlements marked by a high concentration of Nande nationals outside the space of Beni-Lubero. There have been some phenomena that could draw attention to this concern, including:

Several enrollment centers in the city of Butembo are out of stock of voter cards. This fact is all the more astonishing as the CENI leadership in Kinshasa, for its part, claims to have allocated an ample amount of this material for the entire North Kivu via its provincial capital, Goma. A low blow would be deliberately organized at Goma level to prevent Beni-Lubero nationals from gaining access to the rights of voters in the DRC. And since it is impossible to completely deprive so large a population of this enrollment, it is made sure that the number of the candidates voters within it is reduced to the minimum possible. It is a conspiracy against the Nande people to significantly reduce the number of seats in both provincial and national parliaments. According to sources close to the provincial authorities in Goma, it is pointed out that a large number of lots of voter cards for the city of Butembo and the territories of Beni and Lubero in general have been diverted to the Masisi and Rutshuru territories, with a view to enlarging the seats of the latter by the recruitment of candidates from neighboring Rwanda and Rwandan Hutu refugees living in the DRC since 1994.

A computer from the CENI electoral kit used for enlistment at the center of Kavasinza Primary School in Kivugha was taken by Mai-Mai militiamen on the night of 06 to 07 February 2017. Kivugha is a village in the territory of Lubero located about 20 kilometers south of the town of Butembo. In this case, the investigations prove that these militiamen are once again the fruit of the efforts of the power in place. The incumbent government, which encourages them to disrupt the enlistment process, is also seeking ways to accuse indigenous nationals, daughters and sons of the community, of being troublemakers and gravediggers in preparing for elections. However, the real objective of power, by supporting such negative actions, is to diminish the political capacity of the Nande people by depriving them of the means to enable them to be massively represented in the national parliaments.

Nyamilima: an attack is still aimed at the radius of the CENI

Unidentified assailants launched a heavy attack in Nyamilima on Thursday, February 09, 2017 around 7 pm. This sporadic attack specifically targeted the shelter that houses the CENI office of this locality. Until this morning no information is filtered on the outcome of this event. But from the outset, the plan to overturn enlistment operations is increasingly evident throughout the regions characterized by large concentrations of Nande populations. Nyamilima is a locality in the Rutshuru territory on the axis leading to the Ishasha border and where the number of the Nande population has become far superior to that of the Banyabwisha who claim to be heirs of that court.

Such are some cases of torpedoing of the operations of the CENI in areas well targeted by the regime in place. The phenomenon, such as militia enlistment kits, is a scourge that repeats itself and multiplies in a worrying way especially across the territory of Lubero, which would be the most populous in the country. But time runs fast, and there are only 50 days left for the Congolese to run to the enrollment centers. In North Kivu in general, and in Beni-Lubero in particular, there is no guarantee that the climate of security will improve to enable the populations of the counties affected by violence to catch up to acquire their voters cards.

It is urgent to denounce the plan of marginalization of the millions of electoral candidates Nande by the power in place.