PETITION FOR THE PARTITION OF NORTH-KIVU: DEPTH OF THE CONSPIRACY 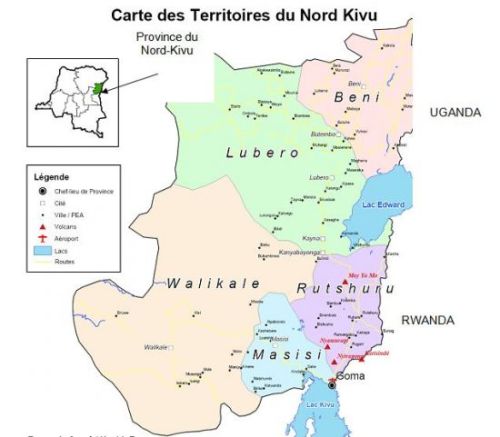 Over time, we observe how the succession of events in the DRC in general and in the east of this country in particular, has more and more traced the framework in which we can find the identification of true Congolese and, at alongside them, that of those who, attaching themselves to this country, cling to it only to suck its riches and its delights.

It is in this context that the petition recently launched by some individuals who call themselves leaders of the Hutu community, feeds the opinions of Congolese citizens throughout the Republic. By surveying all over the country, we are amazed by this petition that preaches the partition of North Kivu designed solely on the basis of ethnic discrimination.

From the outset, some understand better the unveiling of the secret behind the recent statements of the Head of State to his deputies at the African Union’s city against a local community, as the justification for the launch of the The petition we are discussing here contains the same words tainted with hatred and resentment.

When one looks for what could be the objective of the petition launched for the split of North Kivu into two provinces, there is in no way a concern for inter-community cohesion, nor for the integral and harmonious development of peoples, nor for a lasting peace always postponed at the latest; but one can rather perceive without effort the craze for a concern for political self-positioning and the greed of those who are the initiators.

Proven arrogance in the place of other communities

The brave composers of this petition that divides North Kivu are well known. They are actors of this kind of tragic theater since long dates; because their works have been well felt since the time of the RCD / Goma (Congolese Rally for Democracy) until these days, through the FLEC (Forces for the Liberation of Eastern Congo), the CNDP and the M23.

Today, at the head of the sponsors are among others Mr. Eugene SERUFULI NGAYABASEKA, the former governor of North Kivu, Mr. Azarias RUBERWA, former president of the DRC / Goma, the businessman NGEZAYO etc. who, proud of the support they receive from Mr. Joseph Kabila and the President General Paul Kagame, for whom they play the puppets, address the remains of the communities of North Kivu with disdain.
The latter know better than anyone how almost all the communities of North Kivu other than Rwandophones, in this case Hunde, Nyanga, Tembo and others, oppose the partition plan of their province, but the initiators carried away by ambition to rule and exploit mock. Moreover, even within the Rwandophone community, not everyone approves the plot to provoke the partition of the province. The leadership of the Hutu community has taken the people from its base hostage with the support of the ruling regimes in Kinshasa and Kigali.

The real motives of the partition of North Kivu

President Joseph Kabila, because of his political turmoil at the head of the great Congolese nation, has always hoped to return to establish himself at the head of a state, not to say a « kingdom » in the east of the country. the occurrence in North Kivu, to trigger the balkanization of the country. But he discovered that the majority community in the region has proved to be an obstacle to this ambition. So, he hoped to overcome the challenge by organizing asphyxiation and the weakening of the great North Kivu by supporting massacres, the eviction of natives by uninvolved immigrants, violence and insecurity of all kinds. But today, he realizes that this sadistic strategy did not lead to the expected result.

Therefore, he is very concerned by this failure that leads him to lose influence on a province that is demographically the second largest power after the city of Kinshasa. Yes, Nork-Kivu is a demographic and economic power that Kabila fears, knowing full well that it is the « YIRA » Nande community, often identified with the territories of Beni and Lubero, which constitutes its center of gravity (also good for the demographics aspect as for the economic activities aspect). Thus, he thinks that to divide this province would bring another death blow to the great North Kivu, whose hatred he does not hide.

As for the Hutu puppets, they had to bite the trap and the corruption of the President of the Republic for the only reason that they hope to take advantage of this opportunity to clear the « YIRA » the « Munande » on the land of these ancestors, and to create an intercommunity conflict to continue with Yira’s genocide plan, roof away from the management of North Kivu. What naivety! They seem to quickly forget that it is the same Kabila and Kagame whom they carry today the standard of balkanization which treated them no more than yesterday of the « interahamwe » and the genocidaires, the barbarians and the savages, to maintain a campaign of denigration in their place as a pillar of their power before world opinion.

All in all, the petition for the partition of North Kivu vulgarized these days is only one step of the efforts of Joseph Kabila in his concern to balkanize the DR Congo. It is a strategy that ranks on the list of the massacres of Beni, massacres of Kasaï, massacres of Djugu in Ituri …
Congolese worthy of the name to draw the necessary consequences!