Protest of the Notables of Beni against ethnic cleansing in progress 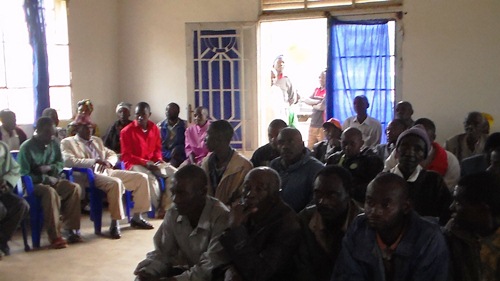 The group of notables of North Kivu;

Having consulted urgently in Goma this Sunday, September 23, 2018;

Indignant at the umpteenth massacre attributed to the alleged ADF / NALU in the city of BENI this Saturday 22/09/2018, which resulted in the loss of about 30 compatriots, including civilians and military;

Regretting that these killings, which have plagued the area for four years, have recently reached the very center of the town of BENI, where the attackers were visible this Saturday at less than 800 meters from the Round-about Nyamwisi;

Unpleasantly surprised by the gradual narrowing of the space controlled by the loyalist forces, which fought tens of kilometers from BENI and defended for weeks in the city itself, which is partly invested by the enemy who evolves at ease in MAYANGOSE for example;

Intrigued by the coincidence of the intensification of his attacks with the arrival of more and more people from the south to Ituri through the territory of BENI,
Concerned about the consequences of insecurity on the electoral process;

Noting with bitterness the persistence of insecurity in an area of BENI beset by the Ebola epidemic;

Informed that, as often the attackers, in particular in KASANGA district, were accompanied by women and children speaking Luganda and Kinyarwanda;

Deeply worried about the fate of areas already occupied by the negative forces, where it is quite possible that these populations are already settled;

Noting, therefore, that the city and territory of BENI are the scene of ethnic cleansing, of pure and simple genocide;

Obliged to note the failure of operation SUKOLA 1, which can not clear the territory and is now fighting in the city while its mission was offensive;

Drawing attention to the grave consequences of the loss of the land of our ancestors following these massacres that threaten the very existence of our communities;

Recalling the determination of the United Nations, the African Union, SADEC, the European Union, the ICGLR and all humanity to never again commit genocide on the planet;

Calling on both the national and international community on the apparent inability of the Congolese Government to put an end to the crimes of the alleged ADF, which now constitutes a challenge against humanity as a whole;

1. The Notables of North Kivu offer their condolences to the dozens of families of civilians and valiant fighters killed this Saturday, September 22, and express their sympathy for the families of the many wounded, the looted, the missing persons as well as the whole of the martyred population of BENI.

2. Solemnly denounces the genocide followed by land grabbing that continues in BENI.

3. Invites the Congolese Government, which had already issued an alert to international terrorism, to draw the consequences of the current shortcomings of Operation SUKOLA 1, and to replace it with an international force with the troops and the means sufficiently prepared, experienced and equipped to eradicate this nebula that is the ADF and restore the authority of the state and indigenous peoples throughout the territory and the city of BENI.

4. Calls on the United Nations, all the countries of the world and the African Union, who are fully aware of the tragedy of the people of Beni, to leave their attitude of obliging silence and to act quickly, otherwise history will make them accomplices of this ethnic cleansing that is done in broad daylight.

5. Calls upon the ICC to launch, all cases ceasing arrest warrants against persons, states, companies and organizations involved, beneficiaries or accomplices of the crimes of BENI.

6. Calls on MONUSCO, the Congolese Parliament and the Provincial Assembly to launch commissions of inquiry to understand the causes and those responsible for the weaknesses of the joint military operations that have been declining for four years.

7. Calls on the CENI to take measures to allow BENI voters to elect in their places of refuge.

8. To the Congolese Government and all its partners to work hard to secure the entire area struck by EBOLA, otherwise Uganda, Rwanda and the entire region will be affected;

9. Civil society to mobilize the population to lobby for the Congolese State and the UN to fulfill their respective missions in the BENI region.

10. Candidates for the next elections at all levels, political parties and political platforms of both the majority and the opposition to exert joint pressure at the level of the Parliament and the Government for the latter and the UN to stop the purification Ethnic in progress at BENI.

11. To the African people and to all humanity to rise as one man so that this shame of our race ceases to tarnish the image of the planet and that its authors answer for their actions.

12. Congolese everywhere to do, each in their own way and according to their abilities, all they can to put an end to the drama of BENI.

13. To the inhabitants of North Kivu and those of BENI, in particular all ethnicities and all political persuasions, the first victims, to join forces to put an end to it by all peaceful and legal means.

14. To military justice and the valiant Congolese military, to denounce and neutralize the traitors and the undisciplined who have infiltrated the ranks of our armed forces.

Together, put an end to the ongoing ethnic cleansing in BENI to eradicate Ebola and have a good election

For the Notable Collective of North Kivu,
Acting under the mandate of the notables meeting today in Goma