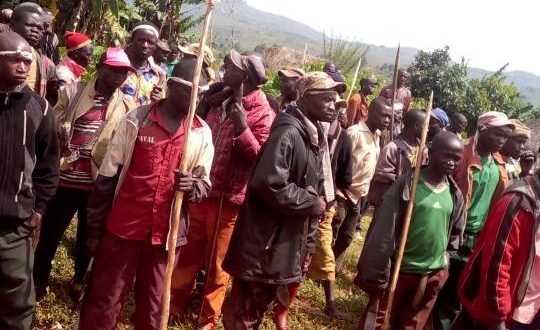 It is with consternation and deep desolation that the opinions are alerted since Saturday, December 16, 2017, on the resumption of hostilities between the two sisters of Ituri, the Lendu and the Hema, in Djugu territory.

The story begins agan last Saturday 16/12/2017, when a Hema subject returning from his field was killed by a group of Lendu with machetes and other weapons. Without delay, the tension rose when the body of the victim was removed from the crime scene; the next day, Sunday 17/12/2017, another massacre occurred of a Hema couple going to the market. These incidents trigger killings and fires that ignite the villages experiencing these events. From the outset the result is important: a dozen deaths and hundreds of displaced. The people of these two communities fled on Monday night for the destination of neighboring Uganda via Sebagoro Port in Hoima District.

It is worth pointing out that Chief Hema Kahwa Panga Mandro, wisely took care to alert his Iturian brothers of these two antagonistic communities, that the regime in place is working relentlessly to plunge them into the chaos of fratricidal conflicts. He then invited them to be cautious about this manipulation of the Machiavellian plan of « kabilist » power. He urged them to unite to work together in the service of peace.

Really President Joseph Kabila, by all these tragedies on which he rest his reign, will have bereaved the country by committing the worst crimes.