Return of the M23 rebellion: a routine game of power in place 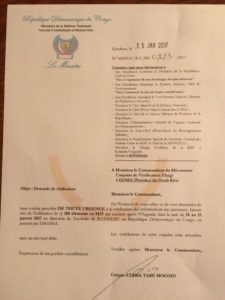 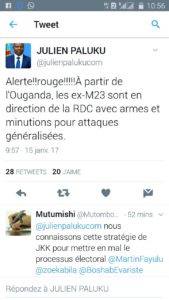 Last weekend saw the atmosphere of the enrollment of voters in North Kivu crumpled by the tumultuous information about the beginning of deployment of the former rebellion of the M23 in their privileged fief of Bunagana. And while the Governor of North Kivu, on his tweeter, estimates the number of these rebels as candidates for infiltration to some thirty armed people, the central government, through its Minister of Defense, the door to one hundred and eighty (180) persons already infiltrated and well established in the countries of Ishasha.

30 or 180 rebels, preparing to infiltrate or already infiltrated, in Bunagana or Ishasha, whatever the detail. The important thing in all this is to make an effort to understand what the phenomenon of the « M23 » is in terms of rebellion against the DR Congo. For a whole year, the editorial staff of Benilubero Online has studied this phenomenon in order to grasp its contours. And, without pretending to have exhausted the data that had to be excavated, some astounding elements were discovered, including among others the following:

– The M23 rebels, defeated by their fiefdoms in the Rutshuru and Nyiragongo territories and refugees in Uganda and Rwanda, have never ceased dreaming of a military return to the DRC, despite the many agreements that this rebellion has signed with Kinshasa under the umbrella of CIRGL, and despite his alleged conversion to a political party.

– Officials of the M23 in exile in Uganda, along with Makenga Sultani at the head, continued to receive financial assistance from President Kabila who encouraged them to persevere until they’re reorganized at the appropriate time.

– This plot is the main reason why Kinshasa does not provide a palpable effort for the repatriation of ex-M23 rebels as foreseen in the Nairobi agreement. It is also in this context that all the arrests of the Ugandan government inviting the authorities of Kinshasa to organize quickly the return to the DRC of the said rebels remained dead letters soon three years. The government of Kinshasa, being caught in its own trap, today gives its Ugandan counterpart the opportunity to react with vehemence.

– Since 2014, reconciliation initiatives have multiplied between the two opposing wings of the M23, one with its reference to Kigali and the other with its own in Kampala. Several times, M23 emissaries from Kigali carried out shuttles to Kampala for this purpose.

– In the course of 2015, after reassuring each other that a new combination of force was still possible between the two antagonistic wings of the M23, a new concern was to seek a shield to the movement from Congolese indigenous armed groups acceptable to native Congolese citizens. The interest of the M23 was then directed towards nationals Nande of the great North Kivu and towards Ituri. In North Kivu, Berlin Roger and his group offered their partnership by connecting to Makenga and Richard Bisambaza (representing the M23 of Uganda), while from Rwanda John Asiki was dispatched to Ituri to try to reconnect with the residues Who still remain from the former UPC / RP of Thomas Lubanga.

– Meanwhile, the political unrest in Burundi will soon offer other partners to the M23. As a result, Burundian refugees were recruited in Rwanda and connected to the M23 and their Congolese partners in the greater North Kivu (Roger Berlin and his group), always with the concern to create a rebellion under the control of an authentic Congolese. It is in this context that Dr. Kalonda, a Congolese living in North America, audaciously presented himself as a valid candidate, compromised: he was arrested by the Ugandan government who had just learned the subversive steps to which he had come to take part.

– But as the whole program of the M23 depends first and foremost on President Joseph Kabila, who is its supreme leader, he had to find someone to follow up the connection of the triangle M23 (in Uganda) – the group of Berlin (on grounds in the North-Kivu) and Kinshasa itself (the leader of the game). It was at this level that the return of the famous White Eagle (Kakolele Bwambale) was considered essential.

Indeed, Joseph Kabila is leading his game. The long awaited moment has already arrived: it is necessary to blur any climate likely to favor the elections that the Congolese people awaits with impatience. The only solid means to this end, according to him, remains the use of his classic method of using the trick of rebellion. Hence, the M23 must be re-opened in North Kivu, perhaps extended to South Kivu, Ituri, and even to Haut-Uélé, so that the spirits are intimidated and turn away from the demands of the elections.

Julien Paluku, the Governor of North Kivu, the Minister of Defense of the central government and Mr. Mende Omalanga are supporters of the conspiracy circle of President Kabila against the State and the Congolese people. It is not in vain that they try to alert opinions to prepare the state of mind of the people on the unpredictable eruption of a war that Kabila is building up from scratch. The excess of the desire to see this bad dream come true pushes Lambert Mende to lying that there was already clash between the government army and the new rebellion of the M23 this weekend in Ishasha while his colleague the Minister of Defense attempts to dramatize a virtual threat of so-called 180 heavily armed infiltrated rebels whose local population does not find any trace either in Ishasha, Nyaruhange, Nyakakoma or Nyamilima … which are the localities supposed to house the said rebels Now.

The movement of infiltration of ex-M23 in the border area of ​​Bunagana is of course a reality that can not be denied. However, the fact that these incivic infiltrators without visibly wearing a weapon become a dreaded threat insofar as they are considered capable of launching a widespread attack throughout the Kivu and Ituri is an issue that awakens all suspicions about a new manipulation of Kinshasa that would then have prepared the endowment of these infiltrators from within the country itself.

Namely referring to Uganda as a country of origin favoring the belligerent return of these rebels, it is a great strategy of distraction on the part of the Congolese government which seeks to win the sympathy of its population by finding a scapegoat for its crimes outside the border.

All in all, it is urgent to denounce this maneuver of the regime in place, which seeks at all costs to remove or to relegate to impossible the holding of the next electoral deadlines, substituting armed disturbances to make consume to the opinions in terms of rebellion. And now what should seem more worrying is what will be the outcome of this new montage and its occurrence on the inclusive political agreement that has just been set up by the efforts of the CENCO under the impulse of the international community, which should give rise to the brief Transitional Government called to lead the country towards the elections before the end of 2017. These are other proofs of a lack of good will on the part of President Kabila all apparent engagements that he pretends to contract just to flatter opinions. What reasons to consolidate the pessimism already growing in the minds of informed observers! What reasons for regretting the retention of Kabila at the head of the country during a transition that bears all hope of the future of the Congolese!