Organized attacks by assailants have targeted this September 27, 2016 trucks traveling the Beni-Kasindi stretch, causing human damage among the passengers who were on board these vehicles.

It is precisely at Nyaleke which is home to the headquarters of the operation area south Sokola 1 that these events took place.

Indeed, a DYNA truck brand which brought itinerant traders returning from Lubiriha border market (Kasindi) has been suddenly riddled with bullets, while all the passengers on board already pushed a sigh of relief, hoping to cross through an area now protected and secured by government soldiers. But unfortunately! They were quickly forced out of their illusion. A surprise and violent attack begins on wheeled vehicles and passengers. The vehicle could escape only through the determination of the driver who braved terror by exceptional courage, preferring to risk his salvation in flight, rather than give in to loose. 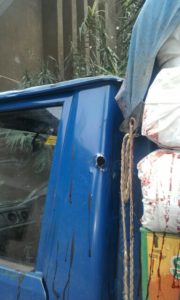 This sense of heroism helped minimize the damage somewhat. Hence, the damage is reduced to 4 seriously injured, including 2 women, currently admitted to the medical center the Brèche, the Matonge district, in the city of Beni. For the driver, despite the injury he sustained, struggled to free the vehicle from the red zone and could rush right up to the Beni Mayor. 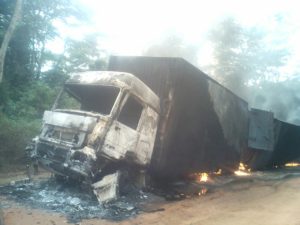 Another truck, this time of ACTROS brand belonging to the merchant named Musiki, a Butembo trader, also fell into the same ambush. His driver, Mr. Paluku Kaghoma Mohamed, a father of five was killed, but his helper was able to escape providentially, disappearing in the bush. To return to the driver, all the cruelty of his killers obvious when you see the way he was beheaded as a slaughtered animal in the slaughterhouse. 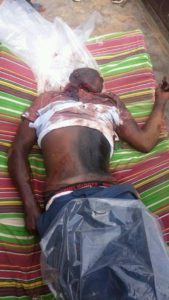 What more scandalizing to learn that the executioners who thus made, are not only elements dressed in outfits of the FARDC, but above all are FARDC elements themselves, which are in full implementation of this macabre operation, continue to be led by their military hierarchy. The testimony of the survivors said while they were held in FARDC and continued to communicate with their command headquarters in Lingala. As an illustration, a witness said that before the fire Actros truck, the attackers first called the commander and he followed the conversation below after « Mokonzi, tosilisi job. Sikawa tosala nini? … Bongo truck Oyo totumba yango? … « (Which means: should command, we ended the mission, what should we do now … Should we burn this

It seems obvious that the daily recorded attacks against civilians in Nyaleke is a logical continuation of the killing of two people in the same place and panic « organized » that caused the death of more than twenty persons by drowning, not counting the wounded, especially among children and the elderly who were either crushed or washed away by the overflowing rainwater from the heavy rain of Saturday 24 September 2016. Nancy Mulisya, daughter of Pastor Bonane in Beni, which image is listed opposite here among the victims of this nightmare.

In short, Beni genocidal somewhat changed strategy: the panic caused last Saturday by a soldier in civilian clothes who shot to put the population in stampede was indeed a massacre trigger signal in the city center by a killer agent to whom by some developing guidelines escaped. Local authorities should stop distracting opinions that the said military has acted under the influence of alcohol (a way to cover this criminal agent). The Mayor of the town of Beni should stop constantly breaking the momentum of civil vigilance, trying to make believe that « there is much to fear than harm. » Besides, the truth is that the enemy is now confirmed to be in the army. Hence the intensification these days of panic and killings organized in the heart of the city and in the outskirts, in the active elements recognized as FARDC.

As for Nyaleke woe to Beni! For the bloodthirsty commander known to New York (if not by the United Nations and the international community), General Fall Sikabwe has just been crowned as plenipotentiary at your home. BLO had lucidly warned opinions about the damage that will accompany its presence in Beni since the day Joseph Kabila decided to strengthen the Beni to military terror operation by splitting the Sokola 1 into two zones, North and South, whose headquarters are based respectively in Eringeti and Nyaleke.

Also, there is rightly soaring noted are killing outbreaks on the axis Beni-Kasindi area held by Fall Sikabwe, with particular killings magnitude in Nyaleke where its headquarters is located.

Thus, the fate of Beni is expected to become more sad than ever! The cutthroats are now at the heart of the city, bearing the image of the national army.