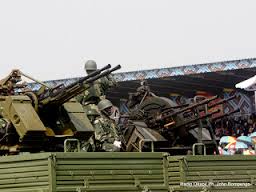 Genocide conducted against The Nande People !

Stop provoking the people with senseless arrests !
As I was checking my messages this morning, I was surprised to learn that security services have arrested the Yira ragae musician, Mayaya. Also, it has been reported that Mr. Yotama is wanted, hunted, and might be arrested in the following hours ! I was so deeply shocked by these news that I exclamed : Stop provoking the people !
Up to now, I don’t know the crime that the people have committed. What crime to security forces reproach to the population ? However, I’d be disappointed if I learned that it’d be the ADF. Note that chef Saambili Bamukoka persists and insists, stating that the killers in Beni are not ADF.
Leading effectively is about knowing how to discern ! And to kwow how to discern is to know how to listen to the people. And to listen to the people is about abstaining from any word, any behavior or any act that would defile the sacred symbols of a people.
Considering the current events in the Great North, especially in Beni and Butembo, I beleive the regime has lost one of its important faculties to effectively listen to and lead the people!
Needless to remind that on August 13, 2016 there were massacres in Beni that cost the life of at least 127 people. That time, the population showed that it is tired and fed up with such recurring criminality. And so, for the first time, people marched in protest, and walked from neighboring towns and cities up to Beni, in order to mourn with their bereaved brothers and sisters. But all the mourning protesters couldn’t reach Beni because the regime has prevented them to do so. Government leaders have touched to a symbol : mourning ! Preventing people to mourn their dead !
In addition, the regime ordered a curfew, which the angry population rejected and refused to obey. And, people continued to express, through social media, their stand against the curfew. I listned to an eloquent testimony from a conversation between two kids who said :
– « Assaillants entered the town in the middle of the day ! Where were the army forces ? »
– And his companion replied : « They were walking behind, far behind the assaillants. And they arrived in the morning when the assaillants had already left ! »
– Then, the other concluded : « We will not smother the fire ; we will set the fire while our army forces are in the forest ! So, the enemy will no longer enter our town unbeknown to us. Otherwise history will blame us of not staying awake ! »
In fact, Butembo and Beni populations went down the streets not only at night but also during the day to make their voice be heard. However, the government didn’t listen and, instead, tried to prevent them, and quell the protest. Instead of listening to the cry of the suffering people, government leaders and security services stifled the people’s voice with arrets, gunshots, and helicopters hovering the town, far away from the fields where the enemy is living for more than two years now.
As if this was not enough, the regime began to touch to the symbols. These symbols are made by the people. To destroy them to start a fire that will not be easy to smother !
Thus, stop provoking the people, but listen to their voice !
You have been given a fair warning !
Kasereka Ndioka
Butembo
« It is thus understood the grave danger of any extension to the power of Joseph kabila. Congolese worthy of the name must reject any form of transition. Indeed, given what is happening in Kivu and Ituri, any transition beyond December 2016 would allow time and resources to the Congolese government which is, obviously, an accomplice of the current Rwandan occupation of Kivu and Ituri” (Father Vincent Machozi, March 19, 2016; speech that earned this murder the next day).