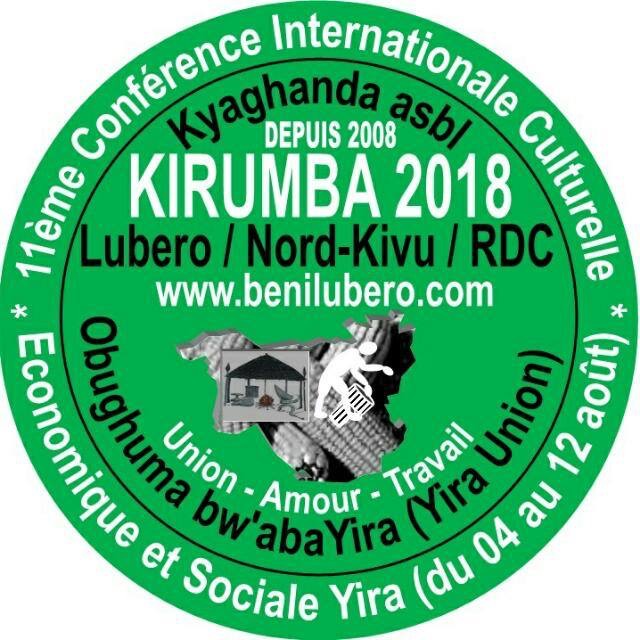 VERBAL MINUTES OF THE RESOLUTIONS OF THE CULTURAL CONFERENCE « KIRUMBA 2018 »

In the year two thousand and eight, the twelfth day of August, we, delegates to the Eleventh International Economic, Social and Cultural Conference Yira « KIRUMBA 2018 », gathered in plenary, in accordance with Articles 16 to 21 of the Statutes of the Cultural Association Kyaghandaa.sbl « Obughumabw’abaYira » in its first amendment, adopted the following six resolutions:

I. RESOLUTION No. KIRUMBA 2018/01 FOR THE SELECTION OF SITE AND DATE FOR THE ASSETS OF THE 2019 CULTURAL CONFERENCE.

1. The meeting of the Cultural Conference of 2019 will be held in the Rural Commune of MANGINA, Territory of BENII, Province of North Kivu from Saturday 10 to Sunday 18 August 2019.
2. This meeting will be convened under the name « 12th International Cultural, Economic and Social Conference Yira », will bear the generic name of « MANGINA 2019 » and will be placed under the sign of « Union, Love and Work » and under the color Blue on White.
3. The central theme is « The responsibility of the Yira Community and the State for the well-being of the DRC ».

1) In all parts of the world, the dowry of a Yira woman remains fixed at 10 goats in kind or in species at the agreed rate according to the price of a goat in the middle. Two goats in kind, non-refundable, complete the customary marriage process: one, to be shared between the two families with blood, to seal their alliance and the other for the customary marriage authorization request (erisava).
2) The local Yira Community approves this marriage by issuing a customary Marriage Certificate signed by Kyaghanda. The « KENE (s) » gifts offered by members of the husband’s family to their counterparts in the bride’s family are also compulsory, in return for the objects and / or food offered to the couple in accordance with custom.
3) Outside of 3 (three) persons maximum in the marriage negotiation delegation (erisimolia) or for the customary marriage authorization request (erisava), and 5 (five) persons for the payment of the dowry ( eritahya) or when recovering the effects of the bride (erisuva enyuma or Ovulya nyama), the surplus is the responsibility of the delegation.
4) The birth of a child is announced to the family of the mother by means of a goat and to family of the father by means of a hen.
5) It is strictly forbidden for the woman Yira, whose destiny is to carry human life in her belly, to take the life of animals. Instead, use the service of a boy to do it before she continues to slit.
6) As of today, the Yira custom of accompanying the visitor for any meal is restored.
7) Each Kyaghanda is asked to create and maintain a compulsory LuYira language school in each Kyaghanda Vulambo or Kiharo.
8) It is requested to remove the skin on the goat to slit.
9) The provisions complementary to this resolution will be laid down in the customary code Yira.

1) Each Kyaghanda is expected to contribute to the acquisition and erection of the Community headquarters in Butembo by initially sending 2 goats by Kiharo initially. An ad hoc committee is responsible for field research and also for contacting targeted operators for their involvement in this project. The same commission is in charge of the research and identification of all the Kyaghanda lands.
2) In the context of self-financing, each Kyaghanda is called upon to oblige each member to have:
– his own membership card;
– The Customary Marriage Certificate by new or old couple whose wife is Yira, Certificate conforming to the single model;
– The loincloth of Kyaghanda.
But also to be regular in monthly contributions and participate in special contributions and activities.

1. Each Kyaghanda, Kiharo or Mulongo is expected to combine and cooperate with the specialized services under its jurisdiction, including MONUSCO, for local security and to inform the Cultural Council, through the General Secretariat, which will seize the superiors of hostile to the Community with a view to requesting the appropriate sanction.
2. The Community is regarded by the Community as an insult and as a wrongful imputation, to qualify by chance a member of « MayiMayi ». The local community reserves the right to appeal to the superior or judicial organs as well as an appropriate customary sanction.
3. It is considered community sacrilege to use the name of the community or association, such as Kyaghanda or Yira, for private purposes or to alienate it in the same direction.

1. Each Kyaghanda is called upon to supervise the Yira candidates in accordance with the terms of the « PDCC » Community Cause Commitment Pact and to request the support of a Cultural Council delegation if necessary.
2. In order to make them available, create equity, but also for the apolitical nature of Kyaghanda, the members of the Executive Committees and Offices of the Vyaghanda Sages’ Councils, those of the General Secretariat and the Bureau of the Cultural Council; Candidates for national, provincial or municipal and local elections are deemed to have resigned as soon as their names appear on the lists.
3. Each entity is required to make the necessary arrangements until new elections are held in their entity.
4. All other Community provisions relating to the RDC 2018 elections are left to the competence of the Cultural Council, in concert with the political operators and the candidates.

Made recommendations and made a statement to members, Vyaghanda, third parties, national and international opinion, the people of the Great Lakes, Africa and the world.

For the Cultural Conference:

Head of Central Office Chairman of the Cultural Council