The Cenco remains firm against the American envoy Nikki: « Kabila must make it clear that he will not run in the next elections! » 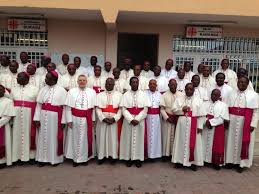 The mission to Central Africa of Madam Nikki, Ambassador of the United States of America to the United Nations, in her passage in the Democratic Republic of Congo, led her to meet with several personalities considered as social and political weight ratio with the uncertainty currently facing the country.

Among the heavyweights is first and foremost the CENCO whose involvement in the process of political dialogue had helped political actors to reach a comprehensive and inclusive agreement, the Agreement of Saint-Sylvestre, ripped to help manage the country that has reached an extra-constitutional situation. Indeed, the President of the Republic, Mr Joseph Kabila, had deliberately lead the state in a shift of power and mandate beyond any constitutional provision. This has opened the door to political chaos that characterizes the country since the end of December 2016.

The secretariat of the CENCO made public a press release summarizing in seven points and in clear terms the responsibilities of the political stalemate and the position of CENCO in the face of the said situation, as the presidency of this religious institution has presented in trade with Mrs. Nikki Haley, October 27, 2017 in Kinshasa. Among its statements to the US envoy, CENCO insists, among other things, that the people and the American government should show solidarity with the Congolese people to demand that Joseph Kabila engage « explicitly » to apply the measures of easing policy and make it clear that « he will not be a candidate in the next elections, » not to mention the emphasis on the obligation to respect the Constitution.