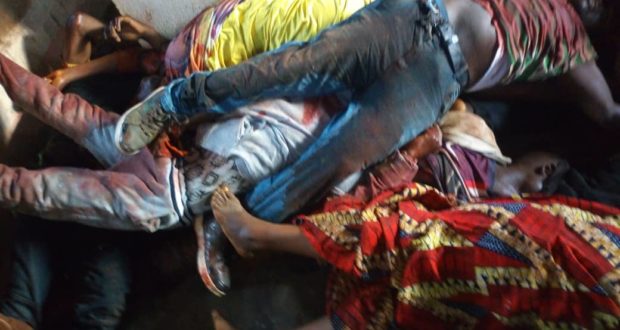 For the umpteenth time, violent attacks were declared this Saturday, September 22, 2018 in the heart of the city of Beni. The event was one of the most frightful since the genocide against the Nande people began in Beni-Lubero since 2014. The tragedy unfolds from 18:30 to midnight in the neighborhoods KASINGA, PAÏDA, KASANGA-PAIDA, KASABINYOLE , until TCB MUPANDA for those who know the city of Beni.

Is this the way that innocent civilians are doomed to extermination by their leaders who constantly brandish the pretext of state sovereignty to prevent the involvement of external countries of goodwill who would be concerned about the protection in favor of Congolese delivered to a fatal destiny?

The authority keeps a silence obviously guilty. This carnage is sufficient proof that the ruling power is determined to carry out its terrorist plan not only in Beni, but also in Ituri and the rest of the eastern region of the country. Would there be another interpretation of this kind of obstinacy? It has been only ten days since MONUSCO gave overwhelming evidence of the Congolese government’s hypocrisy in the genocide deliberately organized in Beni: five FARDCs playing the role of the ADF were captured at Ngandi, while several others of these false ADF fell into the hands of the Tanzanian peacekeepers of the Intervention Brigade who were trying to rescue the civilians caught by these official criminals on September 10, 2018, in the Ngandi-Mavivi radius.

That the world knows it without confusion in the mind, there is not a classic war in Beni; President Kabila organized the FARDC to fight each other, making the effort to remove as much as possible Congolese soldiers still truly loyalist. Neither are there any ADF attackers of the Ugandan rebellion who are slaughtering in the city of Beni and its surroundings or in the rural areas of the territory of that same name. The Congolese government, represented on the ground by politico-administrative and security authorities (police, military and intelligence services) sadly took pleasure in defending its power by planning and executing really diabolical scenes against an innocent people. This is the main mission entrusted to the criminal leaders Kabila has raised at the head of the command and strategic positions of the army from the last reshuffle which has, among other things, dismissed General Didier Etumba from his post to replace him by the murderer John Numbi. Many officers who have distinguished themselves by their ability to execute this organized crime have been gratified. Such is the case of Colonel Moyi who, for having played well in the plan of the massacres of Beni since his first hours (2014), when he was commander of the second sector, has just been crowned general by Kabila and return to Beni to complete the work undertaken.

Considering the presence of all these multitudes of FARDC troops deployed in Beni, what kind of enemy could it venture to sow rebellious terror in the heart of this city, if only with the complicity of those who claim to hold security in the middle? Playing both the fireman and the blower, this is the reality that characterizes the Congolese official in the tragedy of Beni. Also, the public should forget his illusion of believing that the military prosecutor will organize a court to judge the four FARDC-ADF that were captured in Ngandi on September 10 underway by MONUSCO. These Kabila regime vouchers deserve, on the contrary, protection and promotion on the same footing as their predecessors such as General Mundos.

Thus, in Beni, as in Djugu in Ituri, it is the same phenomenon and the realization of the same plan. Credible sources close to power report to our editors that after this unfortunate event of September 22, 2018 in Beni, which marks the beginning of a more amplified stage of the tragedy in the Beni region, a program is under way to strike also most violently in the heart of the city of Bunia, capital of the province of Ituri. This is how the ruling political family in Kinshasa intends to muddle the electoral map and achieve its goals. In the meantime, strong reprisals are being prepared against the Tanzanian contingents of MONUSCO in the Beni region, in revenge for the capture of the FARDC-ADF of 10/09/2018 interpreted by Kinshasa as a betrayal against him.

At the moment, Benilubero Online’s investigations are working to probe opinions through this space victim of the genocide organized by the state, in order to know the kind of reaction that the natives are preparing to put out of harm’s way. this regime that the international community continues to contemplate with a complacent look. But from the outset, the preliminary results of this survey indicate that each population believes that the Kinshasa regime has greatly exceeded the threshold of tolerance. Hence, it would be advisable to prevent the opinions of the imminent popular uprising in the DRC, the first targets would be precisely the collaborators of the power in place who participate directly in the maneuvers of said genocide on ground as well as the deputies who totally abused the the people and betrayed the nation by continuing to support this terrorist regime. Because the population has finally understood that it can no longer rely on national or international bodies for justice to be done in the context of the moment. The entire result of the survey will soon be exposed at the appropriate time.

2018-09-26
BLO
Précédent : Protest of the Notables of Beni against ethnic cleansing in progress
Suivant : A new horrible tragedy in Ituri: How far will the execution of these secret rooms of the State go?