The murderers of Beni massacred 14 UN Peacekeepers of Monusco and wounded 53 others !!! A FARDC officer denounces … 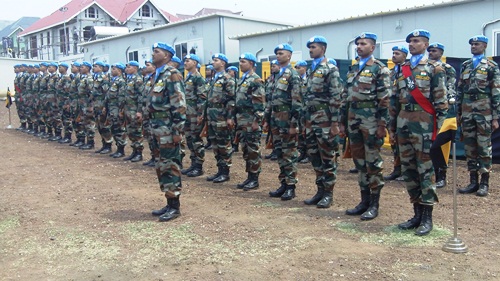 A senior officer of Operation Sokola 1 vehemently denounces the existence within the FARDC in Beni of elements that the Congolese government consciously leave uncontrollable by the command of the sector and inaccessible to the remains of loyalist troops. Monusco or the United Nations Mission for the Stabilization of the Congo has just suffered a carnage that seems to be the first of its kind since the history of the United Nations. The killers of the innocents in the region of Beni attacked, at the evening hours (17 hours) of Thursday, December 07, 2017 the MONUSCO base located at the Semuliki bridge on the axis Mbau – Kamango in the most muscular way. Fourteen Tanzanian peacekeepers perished in this barbarian attack, fifty-three others were wounded, many in serious condition, two MONUSCO armored cars were set on fire.

The attackers, falsely using the name of the ADF, were, as usual, dressed in FARDC uniforms. One of them collapsed under his wounds is totally assimilable to the elements of government troops in terms of clothing.

By this event, the slaughterers seem to reassure themselves of the control of the most important part of the Mbau – Kamango axis. However, MONUSCO peacekeepers strongly defended their base in the Semuliki River that the enemy could not dismantle, despite the damage that was done to the Tanzanian troops of the UN mission there.

In any case, what should grab the attention of anyone is the statement by a FARDC officer in the Sokola 1 operations sector that « there are FARDC units deployed in this operational zone of Beni that the regular and official command of Sokola 1 does not control, because these units deploying in a confused way are neither accessible nor subject to the regular command « . This officer insists that there is great mistrust even within the same units, the military are afraid to confide in each other, because traitors have invested the army at all hierarchical levels. Such a statement betrays all the involvement of the Congolese official in the tragedy that no longer spares anyone in the region of Beni.

What the UN troops have just suffered from this catastrophic attack is synonymous with what happens with someone who tries to caress his dog known as a mad dog. Indeed, the international community has constantly turned a blind eye to the shouts of emotion of the people of Beni decimated by « organized massacres », whose leader is well known, « the Kabila regime », determined to discourage the forces of the MONUSCO and force them to leave the field, as they are embarrassing witnesses to the criminal plan of the ruling power.

In the meantime, indiscretions from the network of plotters inform that the next target of attack of these thugs is identified in the city of Beni. Reinforcements of the slaughterers are being transferred from Kisangani to Beni. There is real pressure on the east of the DR Congo in general and on the Beni region in particular from a false rebellion that Joseph Kabila rises around the M23 coalition – slaughterers. There is every reason to believe that if the international community, whose lethargy betrays enough complicity around the Kabila plan, may continue to pay the price of its hypocrisy in the same way as the poor Congolese citizens, if it does not help significantly the Congolese people to immediately get rid of the regime of this terrorist president.