The opposition has disappointed the people, but it can still redeem itself … 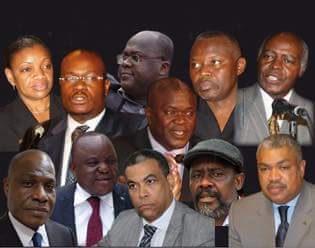 It is a real scramble, they rush not to fail to submit their candidacy for the presidential whose outlines, conditions, the environment remain however not well defined. A frenzied race to the supreme magistracy blinded those who claimed to be the pillars of the people’s interests, until they became incapable of realizing the illusory promises of the dictator who martyred them and all the Congolese people for so long. Is it not idiotic to put the cart before the ox and pretend that the latter should move it forward?

This is the case of the famous leaders of the Congolese opposition who, instead of trying to reassure themselves that the conditions necessary for the holding of truly democratic and transparent elections are met, rush to help those who have prepared the fraud and the masquerade to maintain a system of dictatorship and predation to reach their goals as quickly as possible. Therefore, it would be necessary to wonder first of all « what kind of result will we have with the use of voting machines whose software is already rigged in favor of the one who ordered them to reassure themselves of his own victory? What can we expect from an Electoral Commission (CENI) entirely devoted to the service of the power in place that fights for its perpetuation in time and space? How to believe in the free, democratic polls, when one is every day witness of the repression that prepares Joseph Kabila to transform the operations of vote in carnage of the populations?…

It is necessary to challenge the conscience of all those who, in the name of the opposition and the defense of the interests of the people, seem to be blindly led into a masquerade that will only save the executioner of the Nation, which is already well buried by its calamitous management of public affairs and its innumerable crimes. We are obliged to call them personally so that they know that the people are watching them in this kind of nonchalant behavior.

Moise Katumbi, Felix Tshisekedi, Martin Fayulu, Freddy Matungulu, Vital Kamerhe, Noel Tshiani, Jean Pierre Bemba, Monique Mukuna, must not lose sight of the fact that all the Congolese people are watching them with the greatest attention. Admittedly, going to the elections is the concern of every Congolese. But, immediately, the people expect from their real leaders actions that will eliminate any attempt to use the voting machine, bring back a real climate of political relaxation, guarantee the freedom of citizens to meet the appointment of the polls without oppression or repression. To fail in this preliminary and indispensable task is to prove how dishonest and crooks we are to the people we would continue to trust. These are all parameters that today constitute the thermometer by which the meritocracy of the future leaders of the country will be measured.

Everyone wonders what vaccine would suddenly have opted these opponents in which the people were already watching its next liberating heroes. From the outset, many suspicions arose, among others on the reasons for their craze to evolve in a way that gives largely new chances to Joseph Kabila and his system, on the sources of funding of the deposit of their applications when one finds that many of them can not gather by their own force the amount of 100 thousand dollars required for this purpose …

Finally, it is by no means late enough for these valiant opposition fighters to pull themselves together and redeem themselves before the people who are in control of their listing. This is only possible by meeting the people’s expectations of the use of the voting machine, the « kabilist » plan to destabilize the elections by terrorist acts and repression, because it is absolutely useless to to continue to behave in a manner that accompanies Kabila and his system in his maneuver for sustainability, when there is every evidence that free and transparent elections would never allow him to obtain more than one percent of the votes of truly Congolese voters.